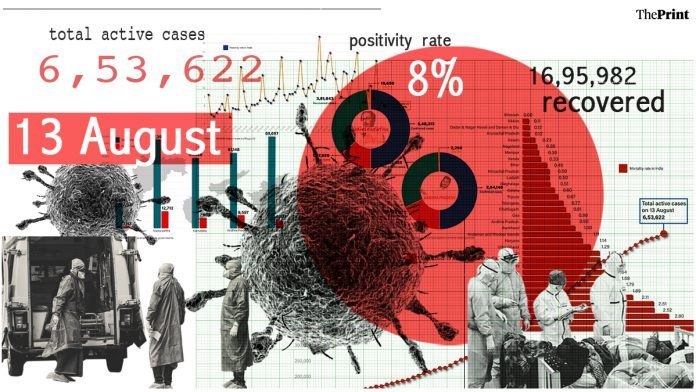 New Delhi: India scaled two new highs Thursday, one good and one bad. It reported the highest daily cases yet again, but it also tested its highest ever, ensuring that the skyrocketing positives do not send the positivity rate soaring too.

Yet another daily high was breached when India reported 66,999 new cases of Covid Thursday, taking the total active cases in the country past 6.5 lakh. The total cases are now within touching distance of 25 lakh.

There were 942 deaths in the last 24 hours, taking the total toll to 47,033. India has a low case fatality rate compared to the global average. However, the pace at which the numbers are growing could make the absolute numbers of casualties a grim problem even with the present fatality rate.

Between 0.11 per cent in Sikkim and 3.65 per cent in Gujarat, there are wide variations between states. Like in case of the national number, this is on a downward trend across states. However, Maharashtra, Gujarat, Delhi, Madhya Pradesh, Punjab and West Bengal are above the national average.

This is the secret behind the falling positivity. India has given a solid push to testing, scaling new highs every day, almost in tandem with the highs in daily cases. In the last 24 hours, a new high of 8,30,391 was achieved.

Despite the rising numbers, one metric which will give India much solace is the positivity rate. It has been on a downward trend for several weeks now, with the target having been set at 5 per cent.

The total cases in India currently stands at 23,96,637. The case burden is among the highest in the world even though as a fraction of the population, it still remains way below other countries.

Karnataka recorded 7,883 cases and 112 deaths in the last 24 hours. But what will really worry it is the doubling time of less than 20 days. The case fatality rate remains lower than the national average.

Andhra Pradesh has off late emerged one of the biggest testers in the country, reporting 9,597 cases and 93 deaths in the last 24 hours. The doubling time is less than 16 days.

Delhi’s daily cases seem to have started rising again with the 1,100 mark being breached in the last 24 hours. The doubling time also has now reduced to 87.5 days from close to a 100 just a few weeks back.

The top three high-burden states in terms of testing are Tamil Nadu, Maharashtra and Andhra Pradesh. While Delhi is way below that, its numbers have started to inch up now.