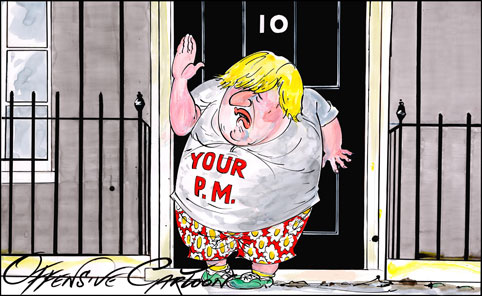 As you have probably read by now, the Shaytan has won, but do not let it affect your day like it has mine.

I understand that someone as vile and disgusting as Boris should not be running a country that has its fingers in so many pies…but he is. And should we let it affect our daily lives? I think not.

From the day Gordon Brown left Number 10 we have been under a Tory government. I understand that for the first time almost all Muslims took the elections seriously and did not receive the outcome we would have wanted – however we have to understand that this initiative should not go unnoticed. The main achievement we attained is that we are able to set our differences in beliefs and world views aside, and unite in order to try our best and make a change for generations to come.

Are things going to be tough? Yes, yes they are. But we have always been able to persevere and the outcome of this election should not affect that. We have far too much pride in ourselves to be dominated by someone as wicked and immoral as Boris. Islam is a religion that teaches us to stand against oppressors and it comes down upon us to uphold this teaching.

We have to also thank Mr Corbyn for standing up for the millions of oppressed Palestinians, even though so many orchestrated attacks upon his character have occurred. He has sparked the vision that someone with honourable beliefs can attain a respective position, and is able to create a huge change. We are merely people who stand upon the shoulders of the greats of the past, and he has given us his shoulders to stand upon and rise up against injustice and to make Britain ‘great again’.

The main reason this snake won is because the people forgot about his main pledges and are simply tired of Brexit. He has promised to get Brexit done as soon as possible, and that is what the public wanted. The issue is that they have forgotten what his stance on many other issues are. They have also forgotten the way he describes minorities. I guess it comes down on the people within his party to keep him in check, and for us to show him that we do not stand for such derogatory terms about Muslims. We can sit there and ‘chew our ties out of frustration’, as he put it, or we can make a stance and say enough is enough.

“The Conservative Party believes in giving people opportunity and empowering people”, according to Conservative MP Shaikh, and yet Boris refers to our mothers and sisters as “bank robbers” and “letter boxes”. Islamophobia goes deep into the core of their party, as shown in their history, and this needs to be investigated. It comes down upon us to push for the investigation and we have to make sure that our voices are heard. We can not sit idly by and let this circus show go on. If he is to be the leader of this country then we have to be able to make sure that he hears us and complies.