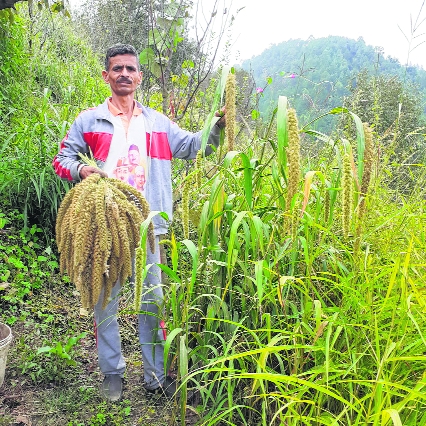 There are some crops that give us money but fail to withstand the changing climate and then there are crops that survive extreme weather conditions but fail in the market,” says Kishor Chand of Seraj valley in Himachal Pradesh, highlighting the dilemma that most farmers are facing in the age of climate change.

The UN General Assembly has adopted 2023 as the International Year of Millets. The primary objective of this move is to raise awareness about the nutritional and health benefits of millets and their suitability for cultivation under adverse and changing climatic conditions, and to spur policy action in this direction.

Rainfed states like Himachal Pradesh need to draw heavily from this initiative. The agrarian livelihood of the state is significantly impacted by climate change. According to reports, extreme weather events, precipitation and temperature are deviating from their long-term trends. This had drastically hit production and income from farms. According to Subhash Singh, a small farm holder from Kangra district, “This season, we waited for a long time, but it didn’t rain at the time of wheat sowing. Last year, we witnessed a heavy hailstorm just a few weeks before harvesting. For two successive years, we have failed to get the desired yield of wheat.”

The past four to five decades of agrarian practices in Himachal Pradesh have created conditions for climate change. A section of researchers claims that the intensive monocropping agrarian system has significantly contributed to the acceleration of climatic variations. A flawed agrarian system and changing climate have negatively impacted productivity and income from the farms and drastically affected the health of nature and humans. It is reflected in the form of drying water sources, reducing soil fertility, frail forests and increasing health concerns among people.

According to the state’s statistical reports, the area under ragi and common millets has decreased to just 6,000 hectares from almost 35,000 hectares in the past 40 years. Multiple factors have led to these trends, particularly the blind push for the Green Revolution-inspired approach in Himachal Pradesh. In the monocropping regime, this is accentuated by the lack of procurement support to millets and the insistence on the use of chemical fertilisers. Almost 90% of the households in the state are covered under the Public Distribution System (PDS), but the food basket is largely filled through rice and wheat imported from neighbouring states. This has made the state food-secure but taken away its food sovereignty. A combination of all these factors has erased millets from farms as well as plates of Himachalis. At present, the state is heavily dependent on the import of foodgrains to meet PDS needs. The major nutrition and health indicators fall in alarming categories, with more than 50% of the children and women being anaemic.

The current conditions need a timely remedy and the past seems to hold significant lessons. According to a section of farmers and policy professionals, the promotion of indigenous agrarian practices, particularly millet farming, can prove to be the best mitigation strategy against climate change.

At a time when farming communities of Himachal Pradesh are bearing the brunt of climate change, a decline in farm income and deteriorating health, millets seem to be the best bet to arrest the slide.

Millets and other indigenous crop varieties are claimed to be most resilient to climate change. Also, they are the contributor of least emissions as they grow within the ambit of agro-climatic conditions and take minimal extrinsic inputs. An experience of the last two decades of climate change mitigation programmes in agrarian livelihoods suggests that any approach that isn’t financially viable at the farmer’s end will fail to yield results irrespective of its scientific merits. Millets’ cost of cultivation is relatively lower than that of prominent crops; their nutritional benefits are greater. Millets contain a higher amount of minerals, protein and vitamins as compared to rice or wheat.

The testimony to millets’ potential in Himachal Pradesh has been provided by farmers’ collectives in recent years. One such initiative is Parvatiye Tikau Kheti Abhiyan (PTKA), a group of farmers in association with some NGOs who are working on the revival of millets in Karsog valley of Mandi district. Nekram, a progressive farmer and a key functionary of PTKA, says, “Initially, 7-8 years ago, we got going as a small group. We started with kodra (finger millet) and sowed it in intercropping with major crops. Over the years, the production in even an erratic precipitation year remained good and doctors started recommending its consumption for health reasons. This word-of-mouth publicity helped us expand to a group of 500 farmers in our region.”

“In the subsequent period, we started creating awareness about the urgency of millet cultivation and shared recipes to revive them in the food culture. In this process, we have reached a scale where we are growing for our own needs. But to expand it further geographically as well as productivity-wise, we primarily need better seeds, dehusking machines and an assured market,” he adds.

In recent years, the Himachal Pradesh Government has initiated efforts in this direction. Under its Prakritik Kheti Khushal Kisan (PK3) scheme, the agriculture department is promoting a non-chemical agricultural way. According to Ravindra A, an agrarian system expert associated with the Revitalising Rainfed Agriculture Network, “Millets disappeared because of an alternative agrarian system that arose post the 1960s and came with a package of input subsidies, research and extension institutions, and assured market through procurement at the MSP.

The revival of millets also needs a complete alternative system that can’t be limited to input support, procurement or training/awareness but instead a mix of all these. We have to focus on production, productivity, processing and procurement simultaneously and rigorously if we want to bring back millets in a big way.”

Though millets alone can’t counter the impact of climate change, they hold potential for doing their bit. Himachal Pradesh should adopt a holistic approach to revive millets so as to spur resilience to climate change as well as enhance the income of farming families and in the long run achieve food sovereignty. 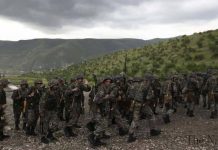 Iran calls on Azerbaijan, Armenia to abide by ceasefire