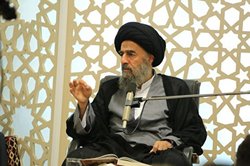 Ayatollah Sayyed Mohammad-Taqi al-al-Modarresi, an Iraqi source of emulation, ‎invited the Iraqi people and government to help the country’s medical healthcare ‎workers to fight the Coronavirus and asked those who have overcome the virus to ‎donate their blood plasma to help treat the sick.‎

In a televised interview, His Eminence called the Coronavirus a global threat and ‎stressed that the way to deal with the virus was to correct past mistakes, such as ‎resolving the problems in Iraq’s healthcare system.‎

Ayatollah al-Modarresi added, “Unlike many countries in the world, the infrastructure of ‎the Iraqi medical system is designed to deal with normal viruses, and we must go to ‎war against this virus and other diseases by strengthening and improving the country’s ‎medical and treatment system.”‎

His Eminence considered the medical staff as the front line of defending the people ‎against the hidden enemy and specified, “Everyone must play a role in supporting and ‎strengthening the country’s medical system.”‎

He presented solutions to strengthen the country’s medical infrastructure, saying, “The ‎importance of medical and paramedical faculties, allocating more funds to the health ‎sector, both in the area of medical staffing and in the area of the modernization of ‎medical centres, support for seminary and university institutions and people’s ‎committees that provide solutions to health problems. These measures, along with the ‎establishment of the health army and the formation of service boards for the ‎Coronavirus, are among the most important measures that can be taken in the current ‎situation in the country.”‎

Ayatollah al-Modarresi concluded, “The cultural progress of a country is measured by ‎the support of various popular groups in government. If people don’t support the ‎government, the government will be weakened. Although the government is the main ‎institution in the country, this doesn’t mean that the government is alone. People must ‎also be active in solving problems.”‎