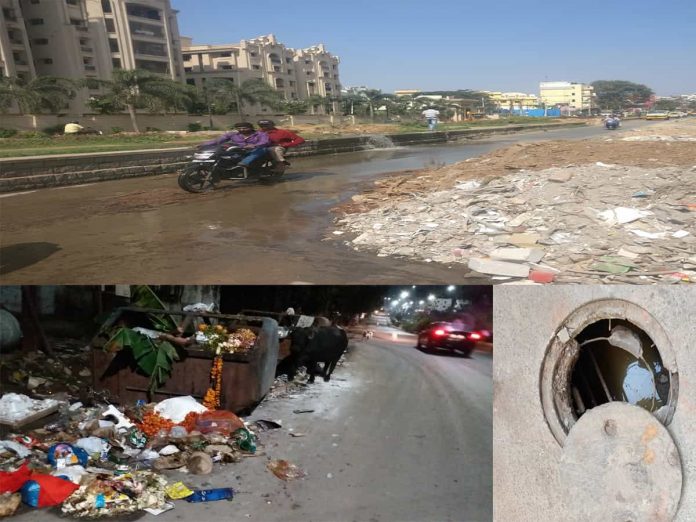 Shaikpet: The Shaikpet main road towards Seven Tombs has turned into a nightmare for motorists as they are forced to pass through a sewerage system. Commuting has become a difficult task when it rains as the road turns into a cesspool.

The overflowing sewage is an emitting stench for the motorists, commercial establishments and households in the neighborhood. The residents are facing unpleasant experiences due to frequent choking of drain and flowing of drain water on the roads.

The sewer stagnating in the area is causing a stink which has become a serious concern for public health issues. An appeal is being made to Greater Hyderabad Municipal Corporation (GHMC) to inspect and take the necessary steps to solve the problem on a permanent basis. -Amjed Ullah Khan, Spokesperson of Majlis Bachao Tehreek (MBT)

Mehdipatnam: The commuters who are traveling from Mehdipatnam road are demanding the GHMC engineers’ team to fix potholes at the U-turn which has been a major concern for motorists. The locals alleged that it has been several months but the pothole is not been fixed.

Mehdipatnam road is one of the busiest places in the city witnessing huge traffic jam during peak hours, as the status of the road has become bad to worse, we urge the engineers to take up the issue before some major accident over here.

There have been instances where vehicles were been stuck in the pothole which lead to traffic jams and also injuring few commuters. If the issue is neglected it might turn into some serious accident someday. -Helping Guide

Secunderabad: Overflowing of garbage has been a constant source of problem for the residents of Secunderabad near the Passport office for the past week.

As the garbage is thrown on the road and making it almost impossible to travel and the stench is unbearable. We have informed the authorities concerned about the unattended garbage at the roadside, but no action has been taken by the officials yet. –Akshaj Kumar

Nacharam: Due to the negligence of the civic body officials in the division of Nacharam, the residents are facing hardships due to the damaged manholes. In many colonies, the drain manholes are crumbling and worse state of condition posing threat to pedestrians and motorists.

Many accidents were taking place along the way due to the damaged manholes. The manholes broke every time it is repaired because of improper works and uneven boundary lining. Residents are demanding immediate repairs and permanent solution to avoid any serious untoward incident. -Joshua Emmanuel