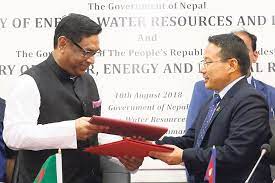 The Ukraine war has shown the world the urgency of enabling alternative sources of energy. There are major powers in the western part of the world that are suffering heavily due to the global energy crisis. Bangladesh is not an exception. The country has a high degree of resilience in the energy sector. But the current global instability in the energy market has also facilitated the crisis to Bangladesh. Here Bangladesh is in search of newer opportunities and Nepal can be a handy option. The newly appointed Nepalese Ambassador to Dhaka urged to make cooperation in the energy sector with Bangladesh. He expressed his views with the prime minister of Bangladesh.

The relationship regarding energy cooperation between the two states has gained a structure over the past few years. With the ratification of an energy cooperation agreement to regulate investment, development, and trade in hydroelectricity between the two nations in August 2018, the bilateral relationship between Bangladesh and Nepal gained fresh momentum. By 2040, Bangladesh would import up to 9,000 MW of hydropower from Nepal according to this agreement. A Joint Working Group (JWG) to enhance collaboration and a Joint Steering Committee (JSC) to assess the JWG’s progress were also established by the agreement. The two committees’ tasks include holding frequent meetings and accelerating the agreement’s implementation. The JWG has held numerous rounds of deliberations, while the JSC has held two meetings. Even there was talk for a tripartite agreement that includes India going on to give the cooperation an effective momentum.

However,with an average GDP growth rate of 7.5% over the past ten years, Bangladesh has established itself as one of the world’s fastest-growing economies. The goal of becoming a high-income nation by 2041 should be paired with ongoing energy production to meet the rising demand from the infrastructural and industrial sectors. Bangladesh is rushing to import energy from other nations to replace the scenario where non-renewable natural gas accounts for 75% of its overall fuel use, in order to slow the declining gas reserve. There are quite a few options to deal with but having a historic connection and taking into account the distance and feasibility, Bangladesh-Nepal energy cooperation can be a handy alternative for Bangladesh in the near future to deal with the growing energy consumption market. The write-up will put shed on the shared energy sectors and the potential of it. These cooperative actions will bring some positive ramifications for Bangladesh.

Message for the Cooperation

Newer Ports for Newer Connections and Newer Use

Meanwhile, Bangladesh is ready to purchase 500 MW of the 900 MW Upper Karnali hydropower project’s electricity. Since Banglabandha Land Port is closer to Burimari Port, Bhandari also stated that his nation is interested in exploiting it for trade.

Inclusion of India in the Bilateral Forum to Strengthen the Sustainability

Bangladesh has asked its neighbor India to sign a trilateral agreement so that it can import hydroelectricity from Nepal at a far lower cost. According to representatives of the Bangladesh Power Development Board and the Power Division, Bangladesh will first be able to acquire 50MW of hydroelectricity from Nepal if the deal is signed (BPDB). According to The Kathmandu Post, citing Energy Secretary Sushil Chandra Tiwari, Nepal too has submitted a second letter to the Indian authorities on the same matter as a collaborative effort. Besides, the Nepal Electricity Authority and the Bangladesh Power Development Board consented to recommend a trilateral power trade agreement from India’s NTPC Vidyut Vyapar Nigam Ltd (NVVN) at the beginning of August of this year in order to allow the export of 40 to 50 megawatts of power generated in Nepal to Bangladesh. Since India is located between Nepal and Bangladesh and the two nations do not share borders, India’s help will be essential to facilitating the exchange of electricity between them.

Moreover, the 900MW Upper Karnali Hydropower Project will be built in Nepal by the Indian GMR Group, which has established GMR Upper Karnali Hydropower Limited to carry out the project’s development. Bangladesh has also taken the choice to purchase 500MW of electricity from the project. In addition, Bangladesh has consented to the cooperative development of the 383MW Sunkoshi-3 Hydropower Project.

In a larger vision shared by Nepal and India, Bangladesh would play a significant role in a sub-regional power market. The Baharampur-Bheramara cross-border transmission line, which connects Bangladesh and India, will be used by the nations to exchange power. The 500MW of electricity can be exchanged thanks to the transmission line, which was officially opened in 2013. Although Nepal and Bangladesh have determined that the Bheramara High Voltage Direct Current is a viable option for sending a small amount of power from Nepal to Bangladesh, it will not be a long-term solution for increasing power exports.

Currently, Bangladesh’s average cost of producing one unit of electricity is Tk 10, compared to Tk 37 for diesel-based power and Tk 17 for furnace oil-based power. The BPDB is having trouble paying its debts to commercial generating companies as a result of the high cost of power, which prevents them from importing fuel to power plants. However, BPDB officials expressed confidence that Nepalese hydropower would be a less expensive option, with a price of no more than Tk5 per unit. Currently, at a cost of Tk6 per kWh, the BPDB imports 1160 MW of power from India. In the case of Bangladesh

Bangladesh and Nepal can be a role model for other smaller states in the region and in the global domain, that cooperation can ensure sustainability whatever the size of the economy is. Besides there will be some other ramifications which will harness newer opportunities. Firstly, Bangladesh can satisfy the rising demand needed to sustain its industrial expansion. In a global order with a disturbed supply chain, the initiatives can make sure the enlargement of the industrial sector. Secondly, Bangladesh can diversify the energy mix to reduce over-dependence on natural gas. The reserve of natural gas is deteriorating so the cooperation may ensure the domestic and industrial drudgeries moved on.

Thirdly, the price of production will decrease sharply due to the lower production cost. Previously, the price of energy is under pressure due to Bangladesh’s deteriorating natural gas supply and the fluctuating cost of its inputs, but experts believe Nepal will continue to deliver a steady supply of hydropower. Fourthly, as energy is a strategic good, importing it from a variety of sources will improve Bangladesh’s regional outlook by reducing its reliance on one particular entity. In this way, in addition to giving Bangladesh a cushion for energy reliability, Bangladesh would also receive some additional economic and strategic benefits from purchasing power from Nepal.

Fifthly, the economic worth of the export should also be acknowledged. The majority of Nepal’s exports are low-value agricultural and raw materials, and the country’s overall exports are not even enough to cover its imports of petroleum products. Nepal exports only 8.6% of GDP, with a massive trade deficit of 38.1% of GDP, compared to Bangladesh’s 16.6% and India’s 13.7% of GDP. Exports have been essentially flat over the past ten years, despite the government implementing several policy initiatives, such as NTIS 2016 and payment incentives based on value-addition. Sixthly, the power export serves both to reduce the growing trade deficit and to attract much-needed foreign capital to the hydroelectricity industry. Just 1600 MW of power may be exported yearly to double the export revenues, which were less than US$ 1 billion in FY 2018–19. Additionally, the export of 1600 MW will not have an impact on Nepal’s capacity to meet its domestic demand because the country has enormous hydropower potential.

Finally, Bangladesh can utilize the concept of “commodity”. Nepal’s 15th Five-Year Development Plan (2019/20-2023/24) lays out plans to turn electricity into a commodity that can be exported. In five years, Nepal intends to increase its current 1250 MW of electricity production to more than 5000 MW, making Nepal an energy surplus nation. Bangladesh, on the other hand, wants to make investments to generate, and import surplus energy from Nepal. Eighthly, regional organizations like SAARC, BBIN, and BIMSTEC can be extremely beneficial by establishing a shared energy corridor that will be extremely beneficial for the economies of all the neighboring nations. Not only are Bangladesh, India, and Nepal members of all three forums, but they also actively support the liberalization program.

People in this area are eagerly awaiting coordinated, practical efforts. An agreement between Bangladesh and Nepal should be signed right away as the first step in fostering energy cooperation. A more comprehensive framework should be developed that includes private investment, public sector involvement, the building of transnational transmission lines, research and development and technology transfer, particularly in the renewable energy sector, as well as sector-specific training and development programs. All of these in the long term will harness the ever-emerging opportunities in the domain of Bangladesh-Nepal energy cooperation and give the two states stable energy and economy.

Darul Uloom asks students to attend weddings only during holidays