All but one Muslim MLAs elected to the West Bengal State Legislative Assembly are from Mamata Banerjee’s Trinamool Congress (TMC), though their number has come down to 44 from 59 in the outgoing Assembly. The total strength of the Assembly is 292 members. Muslims account for 27% of the state’s population.
While 43 Muslim MLAs are from the TMC, the 44th belongs to the newly formed Indian Secular Front, an ally of the Congress-Left combine.

“Muslims of Bengal stood united to defeat the communal, anti-people, fascist forces. But in the processes, the number of Muslim MLAs has drastically come down,” says political commentator Mohammad Reyaz in a his Facebook post.

The TMC had given tickets to 47 Muslims. That way the strike rate of the party has been phenomenal. Two more Muslim MLAs of the party are likely to win from Samserganj and Jangipur constituencies elections for which have been countermanded becuase of the death of candidates in the fray. “Last time only 32 Muslim MLAs from TMC had won,” says Reyaz.

In Kerala, out of 140 newly elected MLAs, 32 are Muslims. Among them, 15 are from the Indian Union Muslim League (IUML), nine from Left parties, three from Congress, three Independents and one each from Indian National League and National Secular Conference. In comparison to the outgoing Assembly, which had 29 Muslims, three more have been added this time. Muslims account for over 26 percent of the total population in the state.

In Tamil Nadu, the 234-seat Assembly has elected five Muslims. Four of them are from DMK (Dravida Munetra Kazgam) and one from Congress. The outgoing Assembly, too, had five Muslim MLAs. Muslims account for six percent of the state’s population. DMK-led alliance has wrested power from the AIADMK winning over 150 seats.

In the Union Territory of Puducherry, one Muslim MLA has been elected to the 30-member Assembly. The lone winner belongs to the DMK. Here, All India NR Congress, an ally of the BJP, is likely to form the government. The alliance has won 14 seats and hopes to get backing of independents.

Meanwhile, no Muslim MLA has been elected on the Bharatiya Janata Party ticket in any of the state legislatures results for which were declared on Sunday. 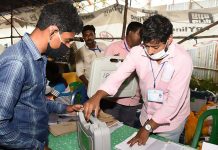