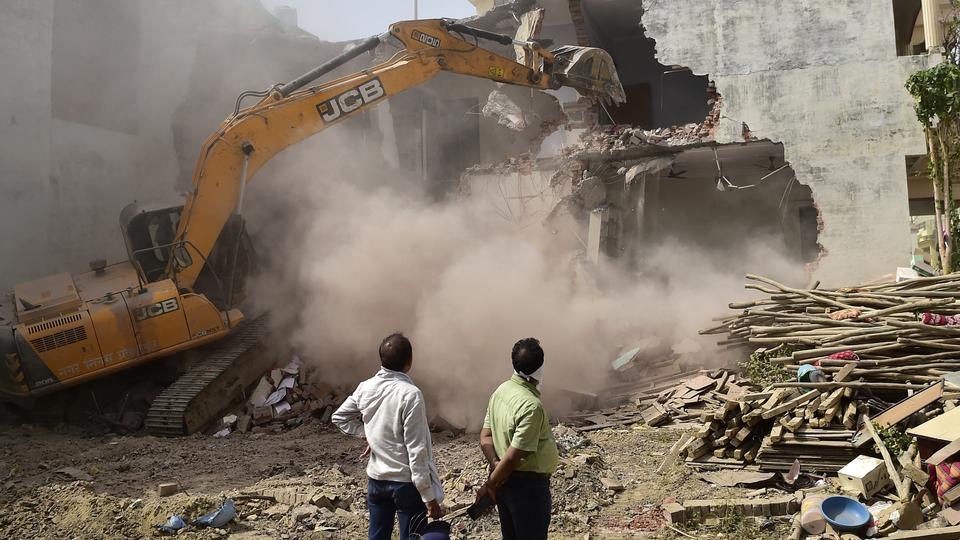 The extrajudicial use of bulldozers on the homes of Indian Muslims sends a clear message about who the law will and will not protect from the encroachment of the state. India’s ruling party, the Bharatiya Janata Party (BJP), was quick to suspend its spokespersons after their comments denigrating the Prophet Muhammad kicked off a major diplomatic storm with Muslim countries.

It was one of the rare instances in which penal action was taken against hate speech directed at Indian Muslims. After all, anti-Muslim prejudice in the public discourse has not only been normalised under the rule of Prime Minister Narendra Modi, but it has also become the primary axis of mobilisation for the ruling party.

Yet, while the government showed a contrite face to the world, there hasn’t been any alteration of their domestic policy towards Muslims. That much was clear from the brutal quelling of the protests that had broken out in several cities last week over the two BJP members’ derogatory remarks.

The most chilling visuals of the police repression of Muslim protestors came from the state of Uttar Pradesh. Bulldozers were used to demolish the homes of those accused of organising the protests. This included the house of Afreen Fatima, a Muslim activist who had risen to prominence during the protests against the Citizenship Amendment Act (CAA).

This was not the first time bulldozers had been used to raze the homes of Muslims in Uttar Pradesh, where this extra-constitutional method of instant punishment has become rampant. Yogi Adityanath, the ruling chief minister, made bulldozers a central motif in his re-election campaign earlier this year.

Of all the crackdown methods frequently employed against Muslim civil society, demolition by bulldozer is perhaps the most egregious. At the bare minimum, there is not even the pretence of a legal process. Sometimes, demolition notices are given just one day prior to the act, leaving the respondent with little legal recourse. There is no law or criminal code under the Indian Constitution that permits the home demolition of a convict, let alone of a suspect.

But the illegality of home demolitions is also its precise point. The message given to Muslims is that the Constitution or judiciary won’t come to their rescue no matter what action the state takes against them. It is another milestone in the dissolution of the de facto ‘semi-citizenship’ of Indian Muslims.

It is worth remembering that just over two years ago, India saw its largest mobilisation of Muslims post-independence during the anti-CAA protests. The apparent reason behind these street protests was the passing of the Citizenship law that Muslims feared was part of a ploy to render their legal citizenship vulnerable to bureaucratic challenge. But the deeper roots of the protests were linked to the perceived dilution of their existing citizenship rights and a concern that their civil and political rights were being gradually chipped away.

That the protesters were right in their assessments became adequately clear following the subsequent crackdown on the organisers of those protests. They were slapped with terror charges merely for articulating their grievances against the government in a peaceful manner. Many of them still remain in jail.

This crushing of the CAA protests’ network of organisers represented a notable escalation of the state’s oppression of Muslims. Since the CAA protests, Muslims have been grappling with doubts over the protection purportedly afforded to them by the laws providing for freedom of speech and assembly.

The prominent Indian fact-checker, Muhammad Zubair of Alt News, who often documents anti-Muslim hate speech, has had numerous cases lodged against him. He was the first journalist to share the infamous newsclip in which one of the BJP spokespersons made derogatory remarks about the Prophet.

These blurry ‘red lines’ have had a chilling effect on the political expression of Muslims.

In Uttar Pradesh, there was a growing pragmatic sense dawning upon Muslims that they must establish a modus vivendi with the government, even if few had voted it in.

However, this pragmatic approach exists alongside mounting unease. On their television screens, Muslims see only an intensification of the usual anti-Muslim discourse. Most news channels hold daily debates in which a ‘Hindu side’ is pitted against a ‘Muslim side,’ wherein the anchor — as the purported voice of the people — gangs up against the ‘Muslim side.’ This kind of news debate format has been recently compared, by the Editors Guild of India, to the infamously genocidal radio channel Radio Rwanda.

Meanwhile, Hindu right-wing vigilante violence and communal mobilisation have detached themselves from electoral cycles and now represent a permanent phenomenon. Recently, violence erupted in Jahangirpuri, in New Delhi, after Hindu right-wing groups marched aggressively in a Muslim locality shouting anti-Muslim slogans. In the aftermath, the state again demolished several homes in Jahangirpuri — the vast majority of them belonging to Muslims — as a form of collective punishment for the unrest.

The political discourse, too, has come to resemble a soap opera perpetually featuring a Muslim villain. Before the verbal attack on the Prophet Muhammad took over headlines, the top political issue within the country was whether a half-a-millennium-old mosque in the city of Varanasi should, in fact, be ‘returned’ to Hindus as it was alleged to have been constructed where a Hindu temple once stood.

Ordinary Muslims have been mostly silent in the face of these provocations: hate speech on television, Hindu right-wing demonstrations and violence, and attempts to change the nature of the Varanasi Mosque. But the anti-Prophet remarks broke the dam of Muslim patience. There was a feeling that this was the particular form of attack on their identity that they would not tolerate.

The BJP has responded to Muslims with bulldozers — and the unambiguous message bulldozer asserts is that the ruling BJP considers Muslims not as citizens to be negotiated with, but rather as a group to be controlled and managed, using brute force when and wherever they deem it necessary.

Blasphemy across the border