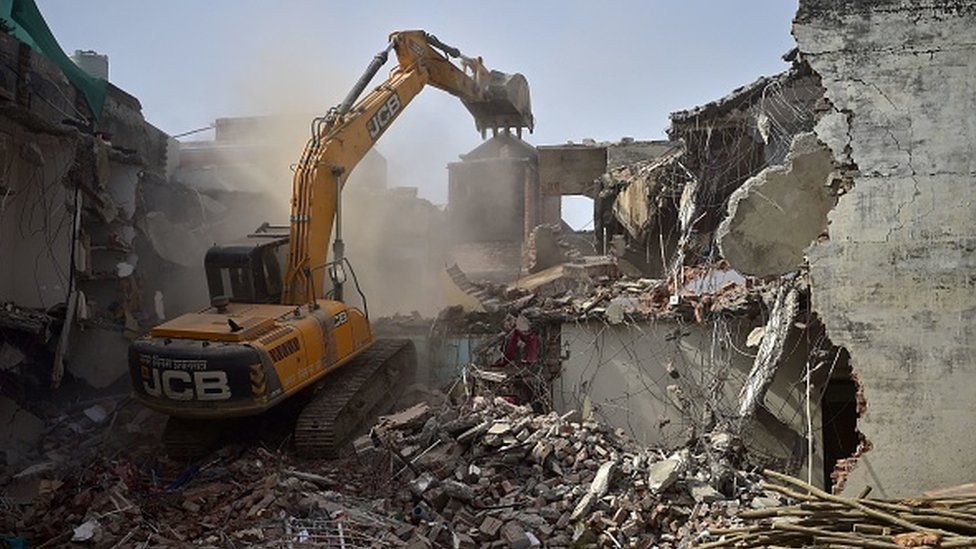 Bulldozers: How a machine has become a vehicle of injustice in India

Bulldozers, invented 100 years ago, have been used across the world to build homes, offices, roads and other infrastructures.

But in recent years, many say, they have become a weapon in the hands of India’s Hindu nationalist Bharatiya Janata Party (BJP) government to destroy homes and livelihoods of the minority Muslim community.

And nowhere are these excavators more visible than in the politically crucial Uttar Pradesh state.

Their latest outing was on Sunday when authorities in the city of Prayagraj (formerly Allahabad) tore down the home of political activist Javed Mohammad, alleging that it had been illegally built – a claim his family denied.

Critics said the real reason behind the demolition had nothing to do with the alleged illegality of the building and that he was being punished for being a vocal critic of the government.

A day before the demolitions, police had arrested him, accusing him of being the “mastermind” behind violent protests in the city by Muslims against controversial remarks about the Prophet Muhammad by Nupur Sharma, a former BJP spokesperson. Ms Sharma was earlier suspended from the party, but the protesters were demanding her arrest.

BJP leaders have defended their actions, saying “nothing is done against the law”.

But the demolitions – which have drawn some comparison with Israel’s use of heavy machinery in the Palestinian territories – have been criticised in India and made headlines globally, with critics saying there is “only the thinnest veneer of legality covering this official action” and that they “are bulldozing over the very spirit of the law”.

In a rare move, former judges and eminent lawyers wrote a letter to the country’s chief justice saying the use of bulldozers was “an unacceptable subversion of the rule of law” and urged the court to act against the “violence and repression against Muslim citizens”.

In a strongly-worded column in the Indian Express newspaper, former federal minister Kapil Sibal wrote that “a bulldozer has no relevance to illegal structures, but has relevance to who I am and what I stand for”.

The use of bulldozers has also been challenged in the Supreme Court and the top court has said “their use had to be in accordance with law and could not be retaliatory”.

This flagging of the menace the bulldozers have become hasn’t come too soon.

Earlier this year, a curious sight greeted me when I was covering the assembly elections in Uttar Pradesh as Chief Minister Yogi Adityanath made a bid for re-election. (He won the polls and is now serving his second term.)

At a roadshow, a group of supporters had brought little yellow toy bulldozers.

“Bulldozer baba” was a name given to Mr Adityanath by the local press, but it stuck after his main rival Akhilesh Yadav used it at a rally.

Mr Yadav had used it derisively, but senior journalist Sharat Pradhan says “the BJP has turned it to their advantage because it adds to his strongman image”.

In many towns, he said, bulldozers were parked at Mr Adityanath’s election rallies and after he won, the machines were paraded before the state assembly building in celebration.

Videos of demolitions of their properties were replayed on national television and won the government some admiration from citizens “for taking a firm stand against criminals”.

“But it has now been increasingly used as a tactic to intimidate the opposition and government’s critics, especially Muslims,” Mr Joshi says.

Before the demolitions in Saharanpur and Prayagraj, Mr Adityanath presided over a meeting where he said that bulldozers would continue to crush “criminals and mafia”.

Mr Pradhan says that from “a symbol of firm administration”, the government has now turned bulldozers into “a potent weapon, overriding the law of the land and using it to cement its hate politics against Muslims”.

“This is how a local tough behaves. It’s like saying, ‘You throw a stone at me, I will demolish your home. I will teach a lesson to your entire family.’

“But the law of the land does not allow you to run a bulldozer on anyone’s property. If a family member commits a murder, can you hang an entire family for that? But this is a government acting as a prosecutor, judge, jury and executioner,” he adds.

The use of bulldozers may have resulted in a global outcry but, Mr Joshi says, it has brought immense political mileage to Mr Adityanath and even won approval from Prime Minister Narendra Modi.

During a visit to the state last December, Mr Modi said, “When the bulldozer runs over the mafia… it runs over the illegal building, but the person who is nurturing it [also] feels the pain.”

Following the prime minister’s remarks, bulldozers have been used in the aftermath of religious violence earlier in the year in the state of Madhya Pradesh and in the capital, Delhi, disproportionately targeting Muslims by destroying their homes, shops and small businesses.

“No court order says that demolish someone’s home, even if they have committed a crime and even after they have been convicted. So when the authorities send a bulldozer, it basically carries a political message – anyone who protests against us will be bulldozed,” Mr Joshi says.

Video: Imam Ali (AS) in the Prophet Mohammad’s (PBUH) words