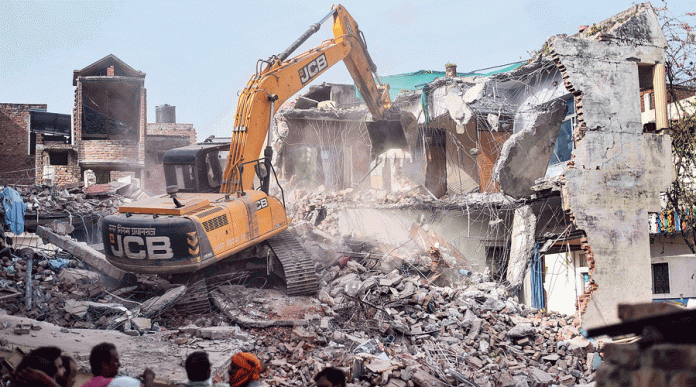 Bulldozing the idea of India

Watching the demolition of houses of the riot accused in Prayagraj, formerly Allahabad, was gut-wrenching. Last month similar scene was played out in Delhi’s Jehangirpuri. In this impoverished locality,homes and businesses of poor Muslims were demolished by MCD officials apparently on the pretext of illegal encroachment despite the Supreme court’s stay order. Earlier in the same month bulldozer was used against the riot accused in Madhya Pradesh’s town khargon.

The politics of bulldozing homes and businesses of an accused is an act of collective punishment whose parallel and antecedent can be traced back to Nazi Germany and the current practices in Israel. Interestingly those who suffered at the hands of Nazis are resorting to the same show of state power, discriminatory politics, and ethno-majoritarian statecraft. Social and political exclusion is at the center of this politics of demolition. The demolition, besides being a collective punishment of yet to proven crime is not only beyond any judicial process; it is also meant to put dissenters and their community in its place.

The usual justification given by the law enforcement agencies in such cases is the maintenance of law and order, or there is no other way to control riots or the other members of the household are the enablers of violence or put simply the property stood on illegal land or was encroachment. The very cursory assessment will reveal many holes in these arguments. Even if one must accept all these still demolitions of houses do not become moral. The demolition of houses should be called what it is – collective punishment, an act of brute state power sans empathy for its citizen.

Demolition violates the basic sense of justice; it does not require any complicated argument. Punishing innocents for a crime they haven’t committed is an illegal act- plain and simple.

It seems India has taken this leaf from Israel’s use of a bulldozer to demolish houses of Palestinian accused of resistance. Israeli officials claim that the house demolition policy is supposed to deter other Palestinians from planning or carrying out such attacks, out of concern that their families’ homes would be demolished. However, Israeli authorities never revealed how effective this technique was or whether it did help to make Israel secure. On the contrary, an Israeli military committee chaired by Major General Udi Shani determined that the efficacy of this policy as a deterrent was questionable and that engendering hate it caused more damage than good.

The fact is that bulldozer has become the symbol of brute state power and its discriminatory deployment in India which is chillingly similar to Palestine. For poor Palestinians Bulldozer is a sign of occupation; demolished houses and establishments are a shame to the judiciary, which hides behind the plea for administrative measures and concern for safety. The displaced men, women, children, weak, and old are mere numbers and assumed to vanish in thin air.

Hindutva’s flat and binary world vision has not yet graduated from demolition, and destruction to construction. Their narrow worldview is substituted by the glorious announcements, a show of might by the way of Shobha yatra, Gaurav yatras, etc. demolishing established houses of the poor and weak. They drive satisfaction and fill the ideological void of their existence by mob lynching, killing unarmed and helpless, and then posting videos of their heinous crime on social media. These narcist traits are nothing but a void of any positive purpose in life. They draw inspiration from the non-existent past glory and are hurt by imaginary historical civilizational wrongs. A combination of these is the best escape from the present living experience which ensures the current ruling ideology indulges in all sorts of thuggery.

The current ruling dispensation has not just copied, the use of a bulldozer to terrorize its most significant minority, from the Israeli rule book but attracted to its ethno-majoritarian rule. A template of an ethno-majority state exists in the name of Israel and Hindutva forces always admired Israel from Savarkar to Modi. Modi and Netanyahu have shared a close “bromance” since 2014 with Israel emerging as the second-biggest supplier of defense equipment to India. But the bonhomie between Modi and Israel goes beyond the dimension of the statecraft; it is of appreciation and drawing a parallel. Modi is taking forward what Savarkar wrote in 1920 If the Zionists’ dreams are ever realized – if Palestine becomes a Jewish state – it will gladden us almost as much as our Jewish friends.”

There is no surprise that lately, there has been groundswell of support for Israel and its atrocities on Palestinians in India by Hindutva eco-system. In 2016, RSS chief Mohan Bhagwat said, “Israel was attacked by the surrounding Islamic countries on five occasions, but the Israeli people repulsed their aggressions and extended their boundaries due to the strong resolve to save [their] motherland. A year before in 2015 while addressing a RSS gathering lamented India’s weak defence and suggested India should learn from Israel. Perhaps it is this advice from the fountain- head of Sangh Parivar that this government has taken to heart- wreaking havoc on Indian Muslims on the silliest of an excuse. Recently, there have been numerous agitations across India some even violent and some lasting for almost a year. Still, none of the protestors’ houses were demolished as these protests weren’t wholly Muslims.

In the last 75 years, India has evolved democratically, unlike some of its neighbours, leaving Hindutva forces to co-opt her through democratic means, i.e. election to make it the first nation for Hindus and relegating minorities to second-class citizens. As Israel has done demonstrably to its Arab citizens which are around 20% of its population. Ethnic democracy isn’t an apartheid regime but a form of democracy that accords priority status to its majority and doesn’t necessarily disenfranchise its minorities. Instead, its policies are designed to push minorities to ghettos devoid of civic amenities, erase their cultural heritage and make them invisible from the public, social and political life. It practically make them feel unwanted and second-class citizens. BJP has actively been doing this and its fallout can be felt in other political parties. The discriminatory legislation, partisan administrative actions, the sleepy judiciary, and pliant media are strengthening the practice of ethno-democracy.

The last eight years of this government has created enabling environment of an ethno-democracy with a marked hierarchy of citizen: Hindus as the primary citizen and the custodian of Indian culture and the other minorities, especially Muslims as a second class citizen. This is the culmination of what Golwalker wrote in 1938 “The non-Hindu people of Hindustan … may stay in the country, wholly subordinated to the Hindu nation.” The idea of India as known to us has finally gave way to India for Hindus only.