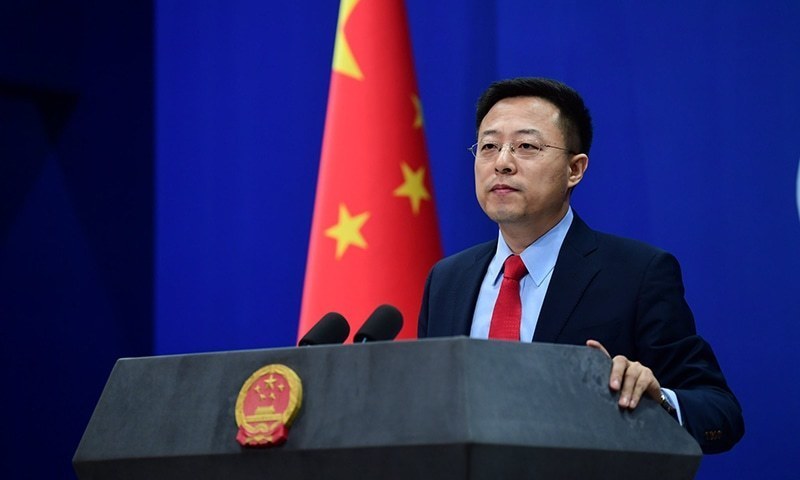 “China appreciates the positive contribution by Pakistan to the international counter-terrorism cause, firmly supports Pakistan in cracking down terrorist forces. Attempts that aim to sabotage #CPEC are doomed to fail,” Chinese Foreign Ministry spokesman Lijian Zhao said hours after Mr Modi claimed a Jaish-e-Mohammed (JeM) plot in occupied Kashmir had been thwarted.

Beijing, which calls itself Pakistan’s “all-weather ally”, has in the past also defended Pakistan from Indian allegations. Besides the strategic alliance between the two countries, they are together undertaking the China-Pakistan Economic Corridor (CPEC), the multi-billion dollar infrastructure development scheme, which is also the flagship project of Belt and Road Initiative.

Mr Lijian’s specific reference to the CPEC also underscored the importance China attaches to the project and its success and security.

“Neutralising of 4 terrorists belonging to Pakistan-based terrorist organisation Jaish-e-Mohammed and the presence of large cache of weapons and explosives with them indicates that their efforts to wreak major havoc and destruction have once again been thwarted,” Mr Modi said in a tweet.

“Our security forces have once again displayed utmost bravery and professionalism. Thanks to their alertness, they have defeated a nefarious plot to target grassroots level democratic exercises in Jammu and Kashmir,” he further said.

According to the Indian media, the tweets followed a meeting chaired by PM Modi in which intelligence inputs warned of a terrorist plot on the Mumbai attacks anniversary.

The Indian allegations came days after Pakistan unveiled evidence of India’s sponsorship of terrorism in Pakistan and shared specific details in this regard with the United Nations, the five permanent members of UN Security Council, and the Organisation of Islamic Cooperation.

Some believe that the Indian allegations, from their highest level, were meant to neutralise the impact of the ‘Pakistan dossier’ launched over the last weekend.

The Foreign Office “categorically” rejected what it said were “groundless allegations”.

“We view these as part of India’s desperate attempts to divert international attention from its state-terrorism in IIOJK [Indian Illegally Occupied Jammu and Kashmir] and state-sponsorship of terrorism against Pakistan. It is evident that India has stepped up anti-Pakistan propaganda, following presentation of the Dossier by Pakistan providing irrefutable evidence of India’s state-sponsorship of terrorism,” the FO said.

It recalled that the dossier presented by Pakistan had “extensively” documented evidence of India’s “active planning, promoting, aiding, abetting, financing and execution of terrorist activities against Pakistan”.

The FO underscored that bland denials and regurgitation of old litany of charges by the Indian side would not change facts.

It said that India’s false narrative about cross-border terrorism could not be salvaged through such allegations.

The FO also reminded about India executing “false-flag operations” in occupied Kashmir and on Indian territory to malign Pakistan before the world.

“We have consistently sensitized the international community about the possibility of India resorting yet again to a false flag operation, and we take this opportunity to forewarn the world again,” the statement said.

Calling on the world to hold India accountable for its support for terrorism in Pakistan, the FO said that India’s “use of terrorism as an instrument of state policy” violated international law, UN sanctions regime and international counter-terrorism conventions.

“Pakistan calls upon the UN counter-terrorism bodies to proceed on the basis of evidence provided by Pakistan and urge India to renounce use of terrorism as an instrument of state policy, dismantle the infrastructure of terrorism it has established to inflict terrorism on Pakistan, and stop the use of other countries’ soil for its terrorist activities directed against Pakistan,” the FO further said.

The dossier had also revealed India’s planning for sabotaging the CPEC. Foreign Minister Shah Mehmood Qureshi, while presenting the dossier before the press, had said that Delhi had sponsored raising of a 700-member militia for targeting the CPEC that worked under 10 RAW personnel.

Military spokesman Maj Gen Babar Iftikhar had then said that $60 million was spent by India on raising the anti-CPEC militia.