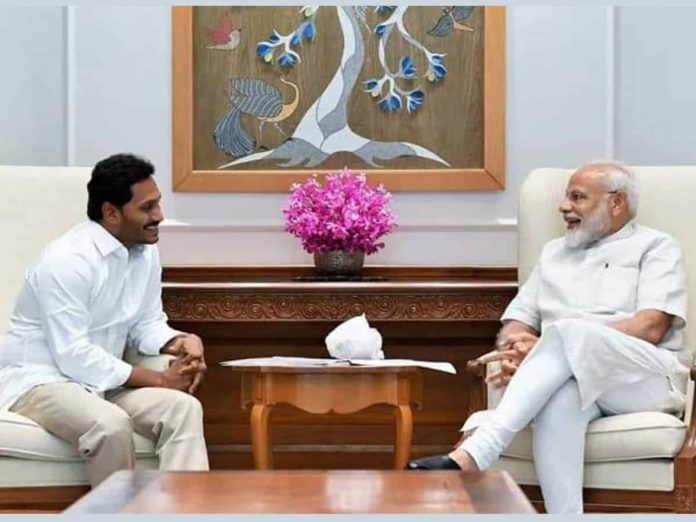 The important point that had reportedly cropped up prominently in the 100-minute-long meeting between Prime Minister Modi and Andhra Pradesh chief minister YS Jaganmohan Reddy yesterday in New Delhi was the dissolution of AP Legislative Council.

According to sources, Jagan specifically requested the PM to initiate the process to abolish the Council.

Jagan does not want to see the Council sit for the budget session next month as the AP Legislative Assembly has already adopted a resolution seeking dissolution of the Upper House.

Jagan believes the TDP-dominated Council has no right to exist in Andhra Pradesh where people’s verdict favoured his YSRC. The Council cannot be abolished unless the Assembly resolution is ratified by the Parliament of India.

So, Jagan is rushing to New Delhi on Friday to apprise Shah of the political situation at Amaravati.

As per Article 169 of the Constitution of India, Centre alone has the power to create or abolish the Council. Jagan, the sources said, wants a bill in the Parliament in the current budget- session itself, so that he can avoid the Upper House during the AP Assembly budget session, likely to be held mid-March.

There are two options before the Centre now. One, moving the Andhra Pradesh Legislative Council (Abolition) Bill and ensure that it is passed in the Parliament.

This is not immediately possible because the Parliament is in recess and it cannot scrap the Council before the commencement of the AP Assembly budget session.

Option two is issuing an ordinance and getting it ratified in the Parliament later. Sources in the AP government told Siasat that Jagan will try to persuade Amit Shah for the second option. A few days ago, much to the disappointment of Jagan,  Council Chairman MA Sheriff had referred the bills to the select committees, which stalled the capital shifting in its tracks. But, there is a catch in the whole issue.

The states of Odisha, Assam, and Rajasthan referred the Assembly resolutions for the restoration or creation of Upper House in their Legislatures to the Centre long back.

Odisha’s Assembly passed the resolution in 2018, while the requests from the Assam and Rajasthan have been awaiting the Centre’s clearance since 2013.

A parliamentary Standing Committee, way back in December 2013, recommended evolving a national policy for the creation of Upper Houses in state legislatures.

The committee found the second chamber in the states had been a victim to political tussles between the ruling and the opposition parties as in AP and Tamil Nadu.

The Committee was very particular about how whims of ruling parties governed the abolition or restoration of the second chamber in Andhra Pradesh and Tamil Nadu.

The moot point is, will Centre agree to issue an ordinance to please Jaganmohan Reddy against this backdrop.