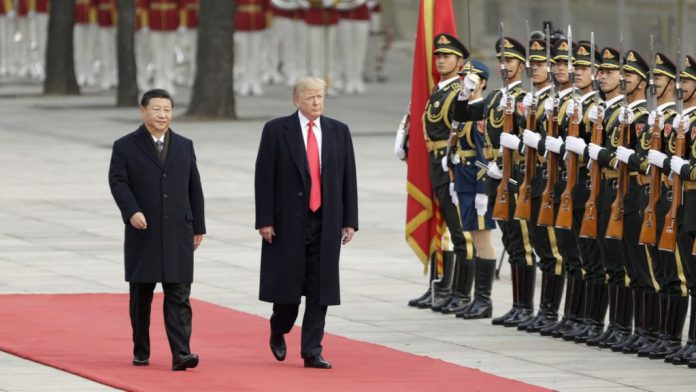 he Iron Curtain 2.0 is likely to descend again on the world grappling with the coronavirus pandemic. One of the leading protagonists is the same as the last time, the United States of America. The other, once again, a communist country, China. The Covid-19 outbreak is going to serve as a casus belli for Cold War 2.0 that was building up in the last few years since Xi Jinping came to power in China in 2013 and has since become its most powerful leader since Mao.

The consequences of Covid-19

The consequences of the Covid-19 are going to be manifold. It is going to change the world order significantly. It might also affect the United Nations, and how it is run, especially considering how China used the World Health Organization (WHO) to mask its lies and save its image and prevented a discussion on the pandemic while it held the chair of the Security Council. The US withdrew from the United Nations Educational, Scientific and Cultural Organization in 2017 and from the United Nations Human Rights Council in 2018. Trump has already spoken about stopping funding to the WHO. The risk of breakdown of multilateral organisations, including the World Trade Organisation, are real. The global supply chains are going to see a shift away from China.

There could be claims of compensation from countries around the world which are facing massive economic losses. A report calculated that just the G7 countries could claim over $4 trillion. China is not expected to pay any compensation if any claims are filed against it. That will trigger countermeasures from the claimants which could be significant including the possibility of an armed conflict.

There is geopolitics over any natural or manmade disaster. Covid-19 is no different. China, where the virus originated, suppressed information and failed to inform the world about it until it was too late. Using its authoritarian ways, it conducted extensive surveillance including use of artificial intelligence and facial recognition to track its citizens and then used methods like welding people in their homes to counter the pandemic.

China sees the crisis as its moment to project its governance model. China’s propaganda led by its foreign ministry, its diplomats around the world and state-controlled media started to promote its authoritarian model of governance as superior over the democratic system which it says has failed. They are using English language and free world platforms like twitter, platforms China denies its own citizens.

China has also used its control over manufacturing of medical supplies to further its geopolitical aims. Its media suggested that China will not supply masks to countries that don’t allow Huawei for 5G. Led by the foreign ministry spokesman Lijian Zhao, China started to deflect blame for the origin of the virus to the US Army which led to Trump retaliating by calling Covid-19 the Chinese Virus.

The reactions have been swift and are ongoing. It is not just the US that has blamed China for the pandemic, other countries have also done so in one form or the other. US secretary of state Mike Pompeo has repeatedly spoken out against authoritarianism.

Western countries are looking to decouple from China in its dependence for manufactured goods and secure its supply chain. The Japanese government has even allocated $2.2 billion for its companies to move out of China. American companies which had started moving out of China in the aftermath of the trade war are expected to speed up their exit. China also recognises this threat and has warned against it.

EU foreign affairs representative Josep Borrell wrote a blog in which he stated that there is a global battle of narratives going on in which timing is a crucial factor. There is a geo-political component, including a struggle for influence through spinning and the ‘politics of generosity’.

The US has led two rounds of meetings of the countries in the Indo-Pacific – the Quad plus South Korea, New Zealand and Vietnam. The purpose as reported by the Times of India is exploring ways to facilitate trade, sharing technologies and movement of people. And not just to deal with the ongoing crisis, but also going forward to see how to put the global economies back on their feet. And while the war of words has been on, President Trump on 27 March signed into law an act that requires the US to support Taiwan diplomatically around the world and take actions against countries that undermine Taiwan’s security and prosperity provoking an angry response from China.

The making of the Iron Curtain

After becoming the President, Xi Jinping announced the Belt and Road Initiative with strategic intent. In 2015, he announced the Made in China 2025 to make the country a manufacturing powerhouse through technology and innovation, particularly in ten core areas. His vision is to make China a global military and economic superpower by the time the Chinese Communist Party celebrates its 100 year rule in 2049, displacing the US.

China has also signalled its intentions to dominate the region – claiming the entire South China Sea (SCS) and put it as part of its expanded core non-negotiable interests. It has militarised the disputed islands in the SCS, claims Japanese island of Senkaku and in 2017, it triggered a 72-day standoff with India over Doklam.

The Chinese aggression was being contested. The US, under President Donald Trump declared China as its strategic competitor in its National Security Strategy released in 2017. Trump’s trade war with China was never just a trade war but a part of the overall competition between the two countries and their battle for supremacy.

The US banned Huawei, China’s leading communications technology company, citing it as a security threat, pressuring  its allies to do the same for their 5G networks. In August last year, Trump asked American companies to quit China. The Quad consisting of the US, Japan, Australia and India which was shelved after its first iteration in 2007, was revived in 2017. The US has continued to conduct freedom of navigation operations in SCS despite Chinese protests and some aggressive behaviour by the Chinese navy against US navy warships.

The Iron Curtain 2.0 will not have defined borders like it had in its first avatar. China doesn’t have a significant number of allies or controls other states like the Soviets did. The BRI is still in the works for that. China perhaps mistimed its breakout.

But the Iron Curtain 2.0 will retain the similarity of its earlier avatar. The battle is going to be for attaining technological, economic and ideological supremacy with democratic countries, led by the US on one side and China on the other with its authoritarian model and its growing technological prowess.

There could be an alliance of democracies that will promote rule of law, open and transparent systems and economic cooperation within them which will incentivise democracies around the world and sanction authoritarianism.

The author is editor of Defence Forum India. He is a commentator on defence and strategic affairs. He tweets @YusufDFI. Views are personal.