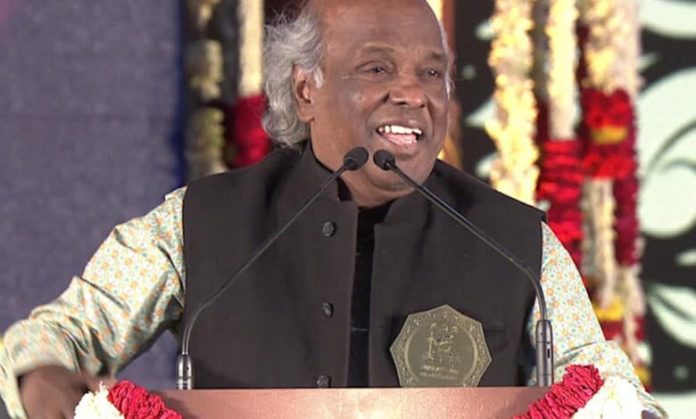 Hyderabad: The death of Rahat Indori, has pulled the curtains down on a new genre in Urdu poetry, that turned simple prose into poetry, discarding the Persianate words, no concern for balanced metre, rhyme and rhythm, norms of Urdu( GAZHAL) read poetry were and are still a benchmark of classical Urdu poetry and poets, but a bane for the commoner.

Rahat Indori was a genre-busting poet, an (Awami) people’s poet, a Mushairah (poetry evening) crowd puller, regaling the audience with his combative Kalam (verse) lacking melody, instead profusely animated. He was a loadstar of the evenings, getting unprecedented boisterous applause almost bordering on frenzy, from audiences be it in Delhi, Bombay or Hyderabad ,Dubai, Kuwait or Doha or soirees in Europe or USA. He used conversational Urdu, the lingo of the man in the street that even non-Urdu speakers could understand and enjoyed his poetry. Despite his not being in the good books of the connoisseurs of the language his contribution was greatly instrumental in pumping life into Urdu as a common language of expression by the millions of Hindustanis , albeit at the plebian levels. Languages perish when they become inaccessible to the man in the street because of their fine nuances and literary intricacies. Rahat Indoris’ poetry was, however, twofer, applauded and lapped up by hoi polloi and the elite as well, though with a smirk.

His death was covered by several leading Indian newspapers and portal sites that carried extensive coverage of his poetry and praise for it by non-Urdu speaking fans and even scribes with subterranean aloofness towards matters and affairs of the community poured praises for his poetry and his style. Undoubtedly a tribute to the late poets and his popularity so rare to come across in present times.

Born to a mill worker as reported in his obituary by the media, Rahat Qureshi, his original name acquired Masters in Urdu and then a doctorate in Urdu literature  from Indore and took to teaching Urdu in the local university of home town Indore in Madhya Pradesh. His forays into Bollywood following in step with some great names of Urdu poets who gave their best to the film industry by their ear-catching songs. But he could not prolong his stay and left the tinsel town unable to reach the bar set by poets like Majrooh Sultan Puri, Kaifi Azami, Akhtar ul Iman, Jan Nisar Akhtar and Javeed Akhtar.

Rahat Indori, though hugely popular among the crowds was unable to share the same with purist and connoisseurs of Urdu poetry who had no ear for his skills in turning the simple Urdu spoken at home and in the bazar into lively enjoyable Ghazals, very often resonating with the prevailing political and social climate in the country.

Over time the time his poetry acquired the shades of resentment and dissent with establishment found in the poetry of Faiz Ahmed Faiz, Ahmed Faraz, Maqhdoom, Kaifi and Habib Jalib , resonating the deep-felt agony, anguish and pain of people being treated like subjects than citizens by government. His repertoire was deficient in the traditional forte of Urdu poetry(ghazal)of the mehboob ( beloved) of locks and tresses, of sorrowful nights and desolate days, pangs of the absence of the beloved.

When asked why not the traditional “I write of life and events surrounding me , how can I write about cascading tresses of the doe-eyed beloved when there is fire around me, turmoil, dissent becomes the order of the day” he once explained.

Rahat Indori, say his critics, said and wrote what others in the field had penned earlier but in a totally different genre, of subtly, tilt, fervor and more nuanced, than the aggressive, combative and plebeianized style of his. Of which, he himself acknowledged in one of his couplets,”Leh tu aye shaeeri bazaar mein Rahat miyan. Kiya zaroori hai ke lehja bhi bazaari rahey.( you have plebianised poetry, but was it necessary to plebeianize the language also).

His poetry will continue to flourish

Rahat Indori is dead but not his poetry that will continue to flourish with ease and splendor for its simplicity and ease of understanding.