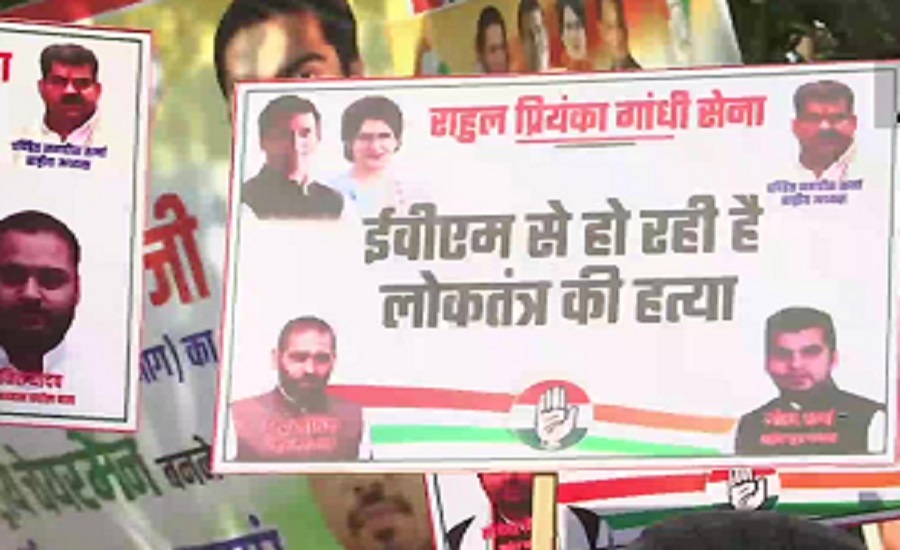 As the early counting trends showed the Congress trailing in all the five states which went to the polls, its party workers protested outside the party’s Delhi office against the electronic voting machines alleging “tampering with Electronic Voting Machines (EVMs)” on Thursday.

The Congress is trailing in all the five states as per the latest official trends by the Election Commission.

As per the trends, Punjab Chief Minister Charanjit Singh Channi is trailing from both the seats he contested — Chamkaur Sahib and Bhadaur. On the Bhadaur seat, Channi is trailing behind Aam Aadmi Party (AAP) candidate Labh Singh Ugoke.

According to early trends, the AAP is leading in Punjab with a majority. As per the Election Commission trends, the Congress is leading on 18 seats and the AAP is ahead on 90 seats of the total 117 Assembly seats.

In Uttar Pradesh, the trends show the ruling BJP leading on 252 seats, while the Samajwadi Party is leading in 112. The Congress is currently leading in two Assembly constituencies and the Bahujan Samaj Party in three seats.