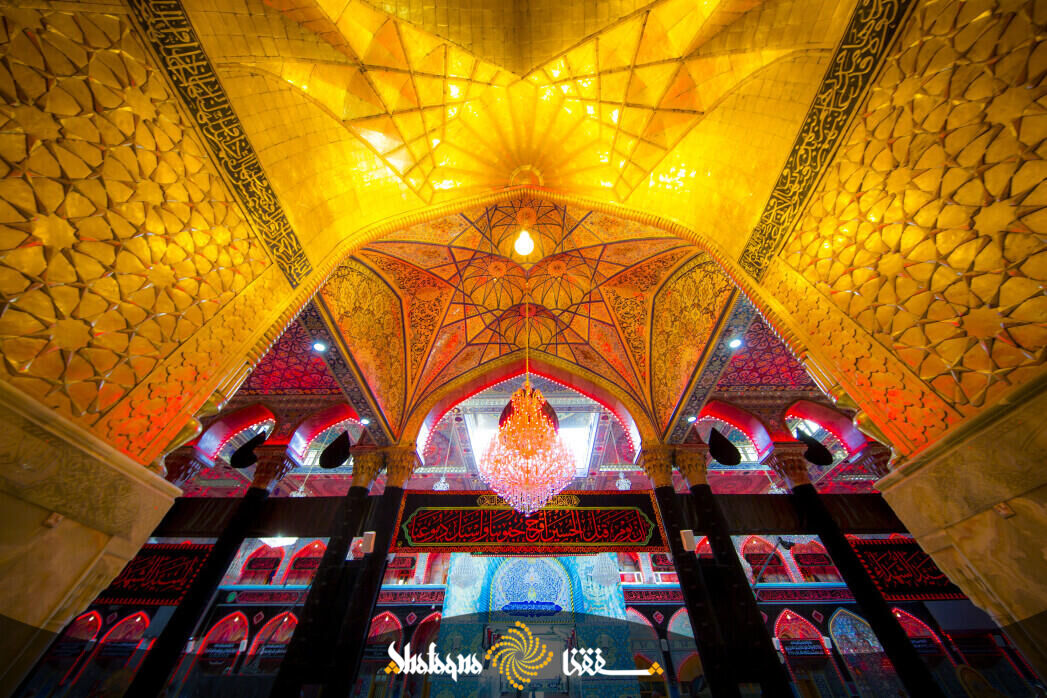 The Pilgrims of Karbala are privileged to fit Ashura of their imagination in actual Karbala, including the representative symbols of that momentous day in history. When I visited Karbala, I also tried to bring to life the Ashura of my imagination, and I, too, tried to connect the dots retained by my inventiveness throughout. I saw significant tangible pillars of the Karbala paradigm, i.e., the Golden Tombs, precisely similar to my perceptibility.

I saw Khem Gah, where Imam Hussain’s (AS) companions pitched the tents in the Plains of Iraq on the banks of the tributary of Euphrates. The place carries the amplest of messages that saw vicissitude after the day of Ashura according to the connotation of the people’s value system with the site. The place has the spiritual aura of every occurrence that cloured the Karbala red. It offers the sense of every conversation, decision, compassion, pain, and emotion that could have surfaced there within the household of the Prophet of Islam (PBUH) in 680 on the 10th day of Muharram in 61st AH.

I walked through it several times, and I sat down. My cognition took me deeper into my thought process, and I tried to catch a glimpse of the place’s message for us. After that, I was filled with emancipatory thoughts, empathy, compassion, and an edge in my intellect.

Karbala is usually understood as a battle between the small group of Imam Hussain and his companions and the massive Umayyad army of Yazid. However, I understand Karbala as a paradigm that emancipates humans. It is a pedagogy that instils greater values among its followers. It trains and refines the human qualities and commences a society that is red and not black, in the words of Ali Shariati. The scholars on Karbala have unanimously stated that it is a magnificent event in Islam that distils the message of Islam.

The paradigm of Karbala throwaways half-heartedness and gives Muslims the meaning and importance of the presence of mind. Karbala has remained pedigree of various movements. It energises and inspires us to choose righteousness with endurance. It humanises humans with greater values and higher good. The binary that visualises the world into oppressor and oppressed is a tremendous inspiration that the paradigm has exemplified.

The meditative inspiration of the Khem Gah has sent me on the journey to demystify the energy that the women of Karbala accelerate. The gender discourse in the contemporary intellectual world is rampant, and the violence based on gender is one of the most systematic and widespread violations of human dignity. The statistics of physical harm, sexual or psychological abuse of women indicate that the contemporary time has increased tolerance towards the dehumanising of women.

The abuse suggests its rootedness in the oppressive min-sets. The mindset disregards women as subordinate beings and prolongs the denial of women’s human rights. The mindset is not just the assumption, but it is proved through the studies, observations, and hefty data like increase in the culture of feticide, preference for a male child or disproportionate placement of women in the social sphere, curtailed access to social securities and denial of a dignified life.

Engaging with the women’s questions within the Islamic paradigm is a slippery terrain. Still, I believe the grease comes from the bigotry of the intelligentsia that benefited from the manipulation. However, the holy book that governs Muslim life has not denied the humanity of women but underlined the difference but fairness between males and females. Quran says:

“O’ humankind, be dutiful to your lord, who created you from one soul and created from it its mate and dispersed from both of them many men and women. And fear Allah (SWT), through whom you ask one another, and the wombs. Indeed Allah (SWT) is ever, over you, an observer” (An-Nisa:1).

Therefore, the holy book clearly intends to communicate equity between males and females, underlining the biological differences. The argument is further substantiated with the neutral intonation of Quranic verses like;

I especially want to emphasise over the relationship between the Prophet (PBUH) and his wives, wherein Lady Khadija provides patronage to the Prophet as well as the revelation. Later the autonomy and agency of Muslim women is seen in the resistance and protest of Lady Fatimah Zahra (SA) after the demise of her beloved father and the Prophet of Islam that she posed towards the establishment on her claim for her right on a particular property or the support that she extended to the concept of Wilaya of Ali ibn Abi Talib (AS), her husband.

Coming back to Karbala, the argument is spread all over the canvas. The Karbala paradigm depicts women of Islam, closest to the Prophet of Islam and household members, as women of freedom, hard to be oppressed, controlled, silenced and full of agency, autonomy and Emancipation. The women of Karbala possessed knowledge that equipped them to acknowledge reality and the truth. They knew Karbala’s disproportionate battle’s higher good and highest virtue. To explain that truth, Imam Hussain is quoted to have said:

“I have not come out to stir emotions, to play with oppression. I want to bring that ummah back to the path of Amir-Bil-Maroof and Nahi Anil-Munkir. I want to lead them to my Grandfather and Father’s path.”

The famous saying mentions the objective of the Imam for undertaking this journey. The conviction that emanates from a deep knowledge of something only could make the women of Karbala fearless that they offered whatever precious they possessed and presented it to the mission. Even after losing everything in its physical sense, Lady Zainab (SA) says:

“I saw nothing but beauty”

The debate around Karbala usually raises the question of why the women accompanied the Imam to the plains of Iraq, Karbala. Multiple scholars have interpreted it in various ways. Still, when we see the practicability of the presence of the women, we see the women of Karbala had an autonomous role to play in the mutiny. The article understands autonomy in the meaning of the absence of control that is stated in the Quran like:

The other verses that validate the autonomy of humans include; when the Almighty declares that there is no compulsion in religion (2/256) and that each person has a complete will (autonomy) to accept or refuse Islam (18/29).

Most of the statements or poetries associated with the women of Karbala in popular culture indicate their individual and autonomous affirmation of the legitimacy of Imam Hussain’s (AS) leadership, called Wilayah. For instance, the insistence that the wife of Habib ibn Mazahir put over her husband to take an active part in the battle on the side of the Imam is indicative of her autonomous belief in the Imam’s Wilayah.

Transforming Islamic Caliphate into a casual sultanate was considered disastrous for various reasons. The emergence of the tendency to conceal the pure message of Islam in the way of power pursuit was mutilating the face of Islam that was its law. There was a chance of re-emergence of pre-Islamic practices and disempowerment of the deprived and weaker. During the reign of Yazid, it was happening with full speed, and thus the ruler was called the oppressor. The message of Islam came as a liberating force for the marginals and the weaker, primarily in Arabia. For instance, verse no 8:8 addresses the honour killing of female children and burying them alive:

Passionately, the verse straightaway criminalises and penalises the vulnerability of the girl child and, at the same time, questions the mindset that is tolerant of such offence. Therefore, it is clear that subjugation of not only women but of any human is un-Islamic.

Among other achievements, Muslim women gained a massive amount of rights and protections under Islam. I agree that within the Islamic paradigm, women got financial autonomy. In various verses, women are not burdened with financial responsibilities towards their relatives, but they reserve financial protection from their relatives.

Similarly, the Quran states various protections that include spiritual rights, rights and protections in marriage, rights of social securities, intellectual rights, rights of dignity and dignified life, and other entitlements that need a separate dedicated piece to explain. The achievement visualised a Muslim woman leading an emancipated life. This, along with the core values of Islam, was being replaced during the reign of Yazid. The soul of the message of Islam vanished structurally from the seat of power.

The women of Karbala foresaw the jeopardy of the alterations that can take place if the religion is replaced with the love for sheer power and the soul of Islam is reduced to the facade purely used to attain power and prestige. Therefore, in my opinion, the women of Karbala took agential responsibility to resist the mighty oppressor. In the sense of freedom from constraints, Emancipation should be synonymous with the Islam that the Women of Karbala are practising. That is why Lady Zainab’s (SA) fearless and unapologetic sermon in the court of Yazid revealed Yazid and his intentions of harming Islam.

In the address, the Lady highlighted the defeat Yazid faced even after massacring Imam Hussain (AS), his companions and the household of the Prophet (PBUH). The roaring of the Lady shook the foundations of the Umayyads, which later turned out to be their downfall and transfer of power to the Abbasid caliphate. The movement that Lady Zainab (SA) instigated is not over yet, and it will continue till the earth is not filled with pure justice.

*Dr Khairunnisa Aga is a journalist and a teacher in Political Science based in Kashmir.

The opinions expressed in this article are those of the author and do not represent the editorial position of Shafaqna.

The article is originally published by “Wilayat Times”

Syria: Shia Muslims in Nubl and Al-Zahraa mourn martyrdom of Imam Hussain (AS)