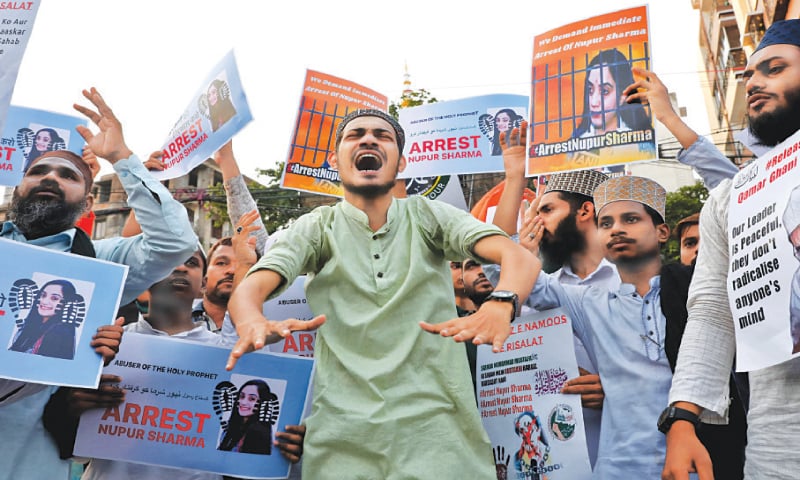 THE large-scale protests in India over the derogatory remarks made by two senior BJP members regarding the Holy Prophet (PBUH) reveal the extent of Muslim hurt and resentment that had accumulated over time. The reaction of the BJP and its government at the centre was a study in sheer opportunism.

The Economist’s New Delhi correspondent wrote: “When Antony Blinken, America’s chief diplomat criticised the decline of religious freedom in India on June 2, bemoaning an increase in ‘attacks on people and places of worship’ in the country, the government … slammed his ‘ill-informed comments’… .

“The reaction was rather different when … many countries in the Gulf lodged complaints concerning offensive remarks about the Prophet Muhammad by two senior officials in India’s ruling Bharatiya Janata Party… .

“The party quickly declared that the comments of these officials did not represent its official stance. When that failed to calm tempers, the BJP took action against the pair. Nupur Sharma, the party’s national spokeswoman, was suspended. Naveen Jindal, its head of media in Delhi … was expelled.”

The BJP’s aggression was an attack on the faith itself.

There are obvious reasons why the reaction was different. The Gulf countries are in a position to substantially damage Indian interests. They include Qatar, which, as The Economist pointed out, is India’s largest supplier of LNG, besides hosting migrant Indian labour. It is the Gulf region from where India gets most of its oil supply.

But the magazine also pointed out that Muslim states have generally opted to keep quiet on the treatment of India’s minorities, including Muslims, by the state, so as not to be accused of meddling in New Delhi’s affairs. However, the BJP’s latest aggression was an attack on the Islamic faith itself.

India is not the only one. In Europe, the same offence is committed repeatedly. Remember the infamous Danish incident in 2005 when the Danish newspaper Jyllands-Posten published a dozen derogatory images. The French magazine Charlie Hebdo also angered Muslims around the world by publishing controversial images of the Prophet.

Over the years, the political climate in Denmark has changed radically for the worse. Writing several years ago, Kiku Day, a Danish musician, noted with regret that the country “took a step not merely to the right but to the far right”. This reveals the domestic roots of Islamophobia. Another is the impact of Islam as a faith on non-Muslim minds and, relatedly, the impact of external politics.

Minou Reeves, until 1979 an Iranian career diplomat, noted centuries of European denigration of Islam’s holiest personage who is revered by hundreds of millions across the world. She mentioned in one book the “whole amalgam of myths that had been conjured up in Europe from the Middle Ages by bellicose crusaders, by generations of churchmen fearful of a threatening and all-powerful Islam, by reforming men of the Christian Church, by flamboyant writers of the Renaissance, by champions of Reason in the Enlightenment, by writers, poets and painters intoxicated by the imagined charms of the exotic Orient, by serious biographers unable to shake off their own Christian view of the world… .”

As opposed to those who criticised Islam, there were others in “the tradition of Roger Bacon, of John of Segovia … of young Goethe … of Carlyle … of Annemarie Schimmel. They have sought to understand Muhammad’s cause, Muhammad’s message, Muhammad’s social and political reforms, Muhammad’s personality… .”

It should go further. A factor is neglected: the Muslims’ self-assertion in politics — domestic and international.

Read these lines by Edward Gibbon in his magisterial book The Decline and Fall of the Roman Empire: “A victorious line of march had been prolonged above a thousand miles from the rock of Gibraltar to the banks of the Loire; the repetition of an equal space would have carried the Saracens to the confines of Poland and the Highlands of Scotland; the Rhine is not more impassable than the Nile or Euphrates and the Arabian fleet might have sailed a naval combat into the mouth of the Thames. Perhaps the interpretation of the Quran would now be taught in the schools of Oxford, and her pulpits might demonstrate … the sanctity and truth of the revelation of Muhammad”.

But the Muslims have been at fault in a said failure of communication. It is not easy for a non-Muslim to understand the place which the Prophet enjoys in Muslim life. It was left to the truly great scholar of Islam, Annemarie Schimmel, to bring home this fact to students of Islam. Her magisterial work And Muhammad Is His Messenger: The Veneration of the Prophet in Islamic Piety is not a biography but a study of just what the ‘Chosen One’ means to the lay Muslim.