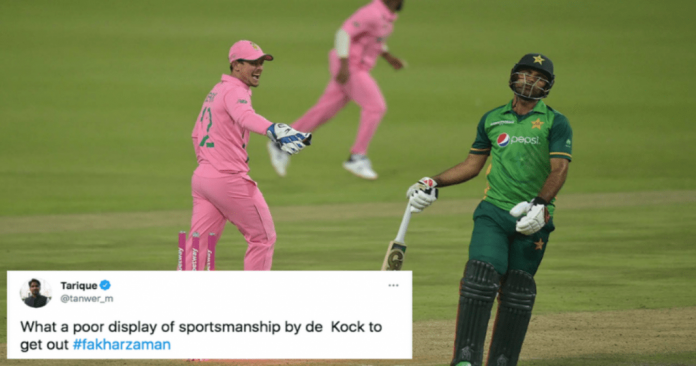 South African cricket team and player Quinton De Kock came under immense criticism on social media for the dismissal of Fakhar Zaman in the second match in the three-match ODI series on Sunday.

The batting lineup collapsed but opener Fakhar Zaman stayed at the crease and supported the team with his spectacular knock of 193 runs off 155 balls. The match became controversial after South African wicket-keeper, Quinton De Kock, cheated Fakhar Zaman with five runs.

Cricket fans accused that Fakhar Zaman got run out after De Kock confused him which lead to the ‘cheating in the match’. The incident occurred in the last over of the match where the Pakistani team had to score 31 runs to win the match and series. It all started with Fakhar Zaman playing a shot on the first delivery by Aiden Markram of the last over. With Haris Sohail at the non-striker’s end, Zaman played the shot at his off-side and aimed for two runs.

While returning to the striker’s end, De Kock’s gestures suggested that the ball was aimed at the non-striker’s end which caused him to slow a bit but was soon caught with surprise when the fielder threw the ball at the striker’s end resulting in the fall of his wicket.

Pakistan cricket fans were left upset and enraged, bringing them to the conclusion that South African players resorted to cheating to win the match.

Pakistan may not have won the match but fans desperately wished Zaman to achieve an outstanding feat of a double-century who was just 7 runs short. Nevertheless, Fakhar Zaman played a tremendous inning, set a record for the highest individual score in a chase in the ODI history and the second-highest for the losing team.

His dismissal sparked a controversy on social media as ICC rules were searched and Twitter users demanded the cricketing body to impose the penalty on the South African team.

Picture of Quinton De Kock giggling after the dismissal of Fakhar Zaman also gained traction on social media. The cricketer came with strong duress for exhibiting silly and lack of sportsmanship on the field.