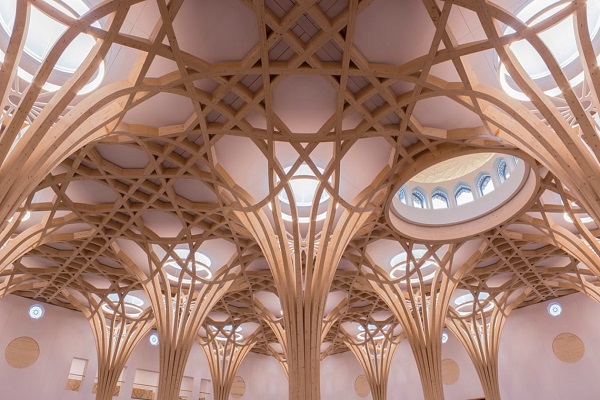 The Mosque is designed to be naturally lit throughout the day and naturally ventilated, even at peak occupancy, while using a combination of green technologies, including rainwater harvesting, air-source heat pumps, and photovoltaic to minimize its carbon footprint.

Late last month, the Mosque won a national award for its design and contribution to the community, according to Hawzah News.

It first opened to the public in April.

According to the Mosque’s website, its design was inspired by both Islamic and English religious architectural traditions.

“We sought to develop the idea of a British Mosque for the 21st century,” the website says.

“With everything from solar panels and grey water harvesting to state-of-the-art heating and cooling technology, it is a pioneer in ‘green deen (faith)’, reminding us of our connection to nature”, Al JAZEERA reported.

British Muslim singer Yusuf Islam is among the patrons of the Mosque and arrived for the inauguration ceremony earlier on Thursday.

Several other donors contributed to the Mosque’s development, including the Turkish government and Qatar National Fund.

“I think this place of worship will be the best answer to the rising anti-Islamism,” Erdogan said, according to Anadolu Agency.

“I believe this Mosque, which has become the symbol of solidarity against discrimination from the first moment, will, God willing, continue to be the center of unity, conversation and peace in the future,” he added.

The trustees of the Cambridge Mosque Trust, the registered charity that looks after the Mosque, said “The Cambridge Muslim community, which brings together local people from over 70 different ethnic groups, is delighted that its long-standing dream to create an ecologically-responsible Mosque has today become a reality. We are grateful to all our sponsors, to local residents, and to all who have shown such patience over the last 10 years while we planned and built this ambitious addition to the Cambridge skyline”.

“We are sure that its symbolism of harmony between East and West will preside over a hub for peace, prayer, and mutual understanding”, Cambridge independent told.

Estimates in 2009 put the population of Muslims in the UK at around 2.4 million. According to the Pew Forum on Religion and Public Life, the number of Muslims in Britain could now be around 3 million.