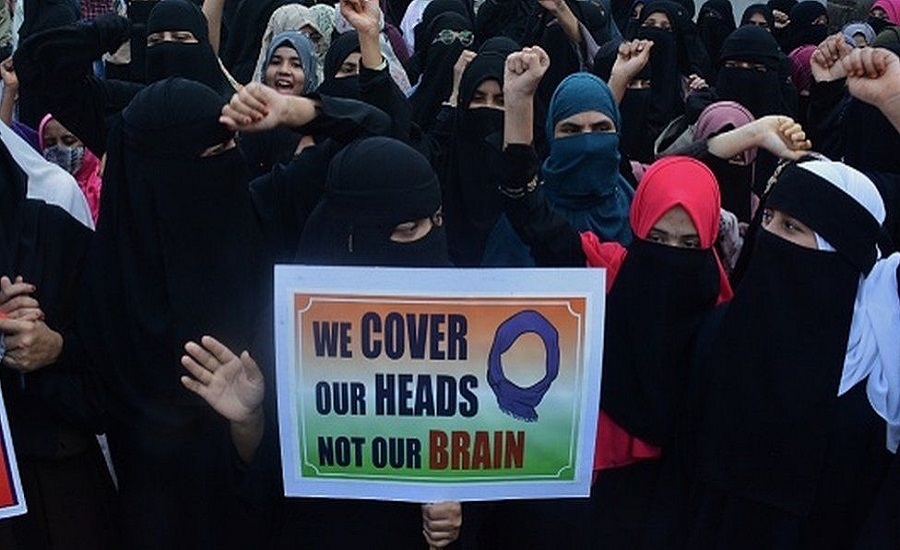 Much has been said about the hijab ban in Karnataka at the instance of extremist Hindutva forces with the support of the ruling establishments in the state and the Centre that harbours fascist interests. Beneath its perpetual agenda to make things difficult for the minority communities and halt/reverse their progress and social integration, the Sangh Parivar also aims to achieve its wider interests under the guise of the hijab ban which has already trickled into other BJP-ruled states.

The growing number of Muslim women in schools and colleges has set alarm bells ringing in the Sangh Parivar, particularly the violent ultra-extremist groups in coastal Karnataka who had launched intimidating campaigns against young Muslim girl students through the right-wing student group ABVP as early as 2016. With the consolidation of the BJP power at the Centre and the profound shift in Karnataka’s politics to the far right, Hindutva groups in the coastal Karnataka are emboldened like never before to fearlessly take out their hate onto the streets.

However, the whole hijab controversy, as usual, seems like a ploy to implement larger agendas in the sinister plans to convert India into an insular, Hindutva-dominated (essentially Brahminist) society, where lower castes and minorities are relegated to the status of second-class citizens – one of the Sangh Parivar’s stated and oft-emphasised objectives. Saffronising the educational sector seems to be a key focus area of the plan.

The Hindutva brigade and their supporters across the three arms of the government never miss an opportunity to reiterate their commitment to the Sangh’s overarching aim to build an exclusive Hindu society. Apart from judicial verdicts and opinions that sometimes shockingly favour the Hindutva extremist positions with scant regard for the rule of law and the spirit of the country’s constitution, even some people in constitutional positions make statements that threaten the country’s diversity and inclusivity.

Former BJP leader, ex-union minister and the present Vice-President of the Republic of India, Venkaiah Naidu, recently made a seemingly harmless, but dangerous statement, according to which it was okay for the government to saffronise education. “We want to go back to our roots, know the greatness of our culture and heritage, and understand the great amount of treasure in our Vedas, in our books, and in our scriptures,” he had said, proving beyond doubt that the saffron brigade is actively going ahead with its plans to corrupt the educational sector, with minorities having only two options to choose from: either give up their identity and accept and adopt the Hindu ways or stay out of schools and colleges.

The National Education Policy (NEP) has perhaps been one of the landmark steps in the Sangh’s attempts to saffronise education, and widen the disparities in access to education on the pretext of modernizing it. A few traditionally Hindutva states like Gujarat and UP have already started their journey along the route to blatant saffronisation. Gujarat, Modi’s former turf which catapulted him to the apex of Hindutva politics, recently decided to include the Hindu scripture Bhagwad Gita in the curriculum of all state-run schools from classes 6 to 12. In UP, ruled by the latest icon of hardline Hindutva and anti-Muslim strategies, a slew of measures have been rolled out targeting madrasas – on which Muslim students depend for affordable schooling and religious studies – including strangling them financially and meaningless measures like making the singing of the national anthem compulsory.

The National Institute of Open Schooling (NIOS), India’s official alternative system for affordable and accessible school education, introduced a new curriculum last year under which ancient Indian knowledge and heritage, including the Gita and Ramayana, will be taught in about 100 madrassas across the country, citing the objectives of the NEP. Similarly, the recently introduced Common University Entrance Test (CUET), which is supposed to provide a level playing field for admissions to Central university courses for students from across various state boards, was launched following repeated cries of “southern” students increasingly gaining admissions to the country’s premier institutions.

As the Sangh Parivar and its affiliates carry out mob lynching with alarming impunity under numerous excuses such as “cow-protection” and “countering love jihad,” it is also active in manipulating the legislature, coercing the judiciary, controlling the executive and influencing the media to implement exclusionist agendas. The alarming regularity of communally divisive statements and threats by various elected representatives and ministers of the BJP across the country reflect the party’s long-term ambitions. A recent example is a statement by a BJP legislator in Bihar that Muslims should not have voting rights and the community should live like “second-class citizens” in India. The CAA-NRC scheme, the frequent calls for a uniform civil code that destroys India’s plurality for good, the numerous public interest legislations filed at various courts to scrap Muslim practices and customs, and the demand for more Masjids to be yielded for mythological temples are all part of the grand plans of the Hindutva project.

The hijab controversy is neither an accidental flare-up among innocent students nor a sincere attempt by the BJP government to enforce uniformity in the classrooms. Through the issue, the Sangh Parivar aims to gain a sizable foothold in terms of their grand scheme, which is why they have been punishing and expelling even the Muslim teachers who wear the hijab as well as the non-Muslim school authorities who dared to take a tolerant, lenient approach towards the affected students. The prejudiced and undemocratic stance of the Central government on the issue only corroborates the allegation that the Prime Minister’s highly touted “Beti Bachao, Beti Padhao” campaign is yet another clannish stunt.