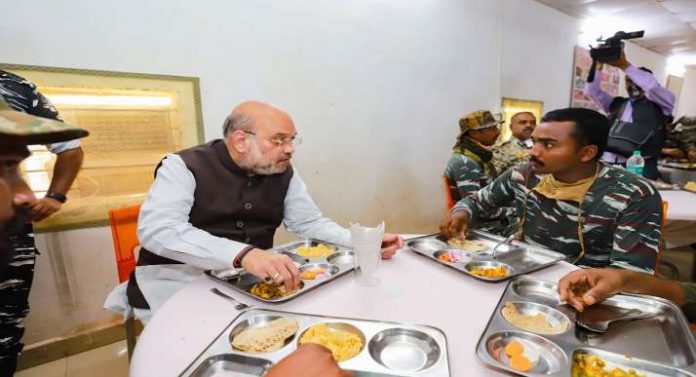 Union Home Minister Amit Shah visited Chhattisgarh on Monday to meet security personnel who were injured in a Naxal attack and asserted that the fight against the ultras will be intensified and will stop only after ending the menace. Amit Shah visited CRPF camp in Bijapur district’s Bansaguda interacting with jawans over lunch to boost their morale a couple of days after 22 of their colleagues were martyred.

Addressing the jawans, Amit Shah said,” The Government of understands all your problems and is firmly standing with you in this fight. We will address all the loopholes as early as possible.” He said that the sacrifices of the security personnel will always be remembered for taking the battle against Naxals to a “decisive turn”.

“I want to assure the country that this fight (against Naxals) will not stop… rather it will continue with more intensity. In this fight, our victory is definite in the end,” Amit Shah asserted.

He appealed Naxals to shun violence and surrender and also warned of severe action against those who refuse keep their weapons down.

“When a friend leaves us and goes we do feel sad. But the poor of this area is devoid of development due to naxal issue…We welcome those who want to surrender and come to us but we’ll have no option if you have weapons in hands,” Amit Shah said.

Earlier in the day, he chaired a high-level meeting at Jagdalpur, the headquarters of Bastar district, on the Left Wing Extremism (LWE) situation after paying homage to the martyred jawans.

The latest Naxal attack took place between Jonaguda and Tekalguda villages along the border of Sukma and Bijapur districts in the Bastar region. Thirty one security personnel were also injured in the ensuing gun-battle with Naxals.

The security personnel were ambushed by Naxals when they were out on a combing operation in a forest along the Bijapur and Sukma districts. Out of the total 22 fatalities, the CRPF lost eight men, including seven commandos of the CoBRA (CRPF’s elite unit) and one jawan of the Bastariya battalion, eight of the other deceased were from the District Reserve Guard (DRG) and six from the Special Task Force (STF). One jawan is still missing, officials said. 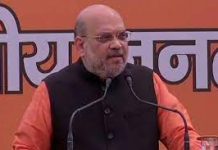 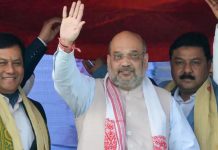