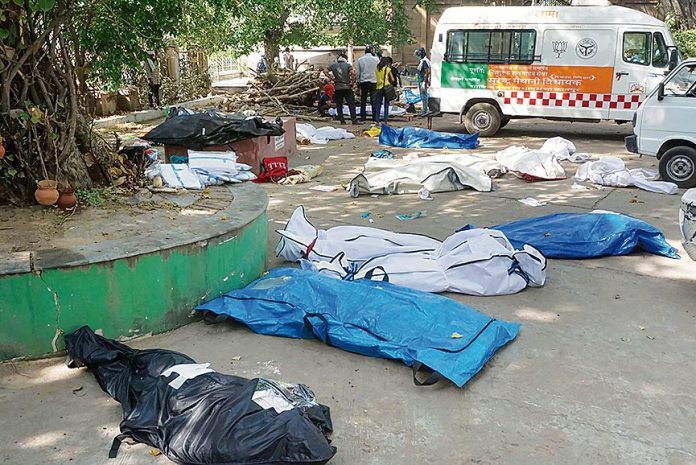 I CAME across the following few lines and reproduce them here because they neatly sum up the situation in our country today:

Not great poetry but it sums up today’s reality neatly and also concludes on a positive note. How did we reach this situation in such a short time and how have we been caught with our pants down a second time? The first wave was not a very virulent one and we fought it successfully with our limited infrastructure. There has been plenty of coverage of what went wrong with the second wave and I do not want to repeat it.

However, there is one main reason for this tragedy — ‘hubris’ from the top to the bottom rung. The leadership was in a self-congratulatory mode and paeans were being sung in praise. The ruling BJP’s February 2021 political resolution states that India had ‘set an example in front of the world for what work can be done during Covid’. We claimed that we were on the verge of producing vaccines that would help the whole world. We had the highest capacity to manufacture vaccines developed by other countries and we could supply them to the rest of the world. Our External Affairs Minister told the western countries’ media that India would not run on the dictates of a few western newspapers and we would ‘push back’ if any governments tried to push us. We upped our claims to being the new economic powerhouse and also the ‘vishwa guru’.

We boasted of our military power as exhibited by our stopping of the Chinese in their tracks — the jury’s still out on that one. Top ministers and politicians of our ruling party ridiculed the Opposition, so much so that the Union Health Minister had the audacity to write an insulting reply to the former PM Dr Manmohan Singh’s letter making some suggestions. The short point is that euphoria prevailed, and hubris hit our leadership.

In spite of repeated warnings from various quarters that a second wave would come soon and would be a more virulent one, state after state started dismantling its anti-Covid infrastructure. On April 26, The Indian Express’ front-page story narrated this in detail: Delhi, Uttar Pradesh, Karnataka, Jharkhand, Bihar, etc, started dismantling the additional infrastructure early this year in the mistaken belief that the pandemic was coming to an end. Makeshift hospitals were folded up, contract health staff were laid off and little effort was made to ramp up critical health infrastructure like ventilators, medical oxygen, ICU beds, staff and additional temporary hospitals. The states should also have made independent plans to meet the next wave — after all, health is a state subject. The Centre should have drawn a national plan to meet all kinds of demands of technical equipment and other infrastructure, especially since they are controlling the vaccine rollout and the states have become totally dependent financially on the Centre.

The Centre’s allocation for the health department has always been low, even in the last budget it was a mere 2 per cent. As the tsunami hit the country, the states started making huge demands but critical things like oxygen, ventilators, vaccines, etc, were not available with the Centre because there was no national plan in place. We did have vaccines but, in our over-confidence, and in the exercise of vaccine diplomacy, we gave away a lot of these to other countries, courtesy the MEA’s aggressive diplomacy. Having claimed a superior pandemic response than the rest of the world and after proclaiming victory, we are today forced to seek help from other countries, who were initially cold in their response but have now warmed up and are sending help. The western press also went after our leadership (especially our PM) hammer and tongs and depicted us in a very poor light. It never pays to disparage respected media giants; no need to kowtow to them but no need to needle them either.

Meanwhile, the pandemic surges ahead with no signs of tapering off. We should learn our lessons and take corrective steps as there is already talk of third and fourth waves. We are currently facing a very tough situation and should step up our preparation. Manufacture what we can, import what we have to, add staff where needed, etc. The Centre and the states should take this opportunity to upgrade the entire health infrastructure of the country. As it is, the poor are always demanding better healthcare and educational facilities for their children. The Centre can be more liberal in giving financial help to the states for this purpose and avoid wasteful expenditure on self-aggrandisement such as statues and vistas which have no immediate utility in the war against the pandemic.

Coming to the question of responsibility and accountability, I have not read anything in this regard. This is a very crucial issue as it has resulted in massive loss of life and hospitalisation of lakhs of people in urban areas (the rural countryside data is sparse). I have missed seeing any photographs of top political leaders visiting hospitals and affected areas. Most of these ladies and gentlemen have been fully vaccinated on a priority basis and they can wear masks and PPEs to visit the hospitals and raise the morale of the staff and patients. One has not heard from the Union Health Minister except for his response to Dr Manmohan Singh. When the going was good in the beginning, the bureaucrats of the Health Ministry were on TV daily to give briefings on Covid; however, they have been conspicuous by their absence in the face of the second wave, especially on the frontline where we have seen horrific sites of our citizens lying on roadsides and outside hospitals and crematoriums. Even the Health Minister, a doctor himself, has only rarely stepped out. I would have expected all MPs to go to their constituencies and look into the welfare of their citizens.

Similarly, the responsibility of the states is even greater. The Chief Ministers, Ministers and MLAs should have been in the field in their areas. The bureaucrats in the Secretariat, and the DMs/SPs should have been moving around in their areas. I fail to understand as to what they are doing in their state or district headquarters. If they are not with their people in their difficult times, will they appear only during elections? Another very big segment that could have been mobilised is the workers and cadres of all political parties. The BJP/RSS have the largest, most disciplined cadre which could have been used, but unfortunately one hears the priority for their services was the election in West Bengal. This is applicable to the other parties as well.

Last but not least, both at the Centre and in the states, responsibility should be fixed, especially in the departments concerned and action taken against bureaucrats, politicians, etc. A message should go out to everyone that this “sab chalta hai” attitude is no longer acceptable, and heads will roll. A calamity of this scale has happened because of criminal negligence of the Centre and the states, and they should be called to the bar of accountability. As far as our country’s leadership is concerned, I leave you with an old quotation of Shahab Jafari: