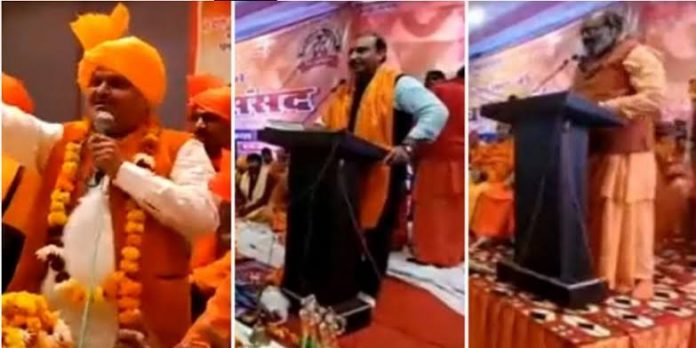 Hindu – Muslim relations have reached a tipping point in India. This has happened under the BJP rule where a series of anti-Muslim events is witnessed to convert the Indian political scene into an 80 vs 20 format to consolidate the Hindu majority by vilification of Muslim minority on 24×7 bases.

There has been a series of events that have followed since 2014 and to count a few are lynching of the Muslims by the cow vigilant, citizenship amendment act, Tablighi Jamat and Corona connect, Delhi riots, ‘Dharma Sansads’, Hijab, Halal, Azan, Gyanwapi mosque, blasphemous remarks against the prophet, bulldozing of Muslim protestors homes, are all sordid tales in the dipping Hindu – Muslim relations in India.

How did this situation emerge?

All these situations have emerged in the backdrop of three broad phases to cover up the crisis of governance that is the hallmark of the BJP rule. The starting point was the t demonetization of the currency on Nov 8, 2016. This knocked the bottom out of the economy and its cascading effect was felt in every sphere of activity leaving India battered and bruised. The BJP government in order to cover its policy paralysis engaged in the politics of Hindu- Muslim polarization to cover up its wrongs. The government media its mouthpiece and tasked it to rationalize all the government actions no matter how much flawed they may be.

Second is the landslide victory of the BJP in the General Elections 2019. Narendra Modi after winning the 2019 elections demolished the principle of federalism and pull down as many as nine elected state governments in the country. He devised a new relationship with Jammu and Kashmir abrogating article 370 and robed its statehood status by making it two union territories. He brought in the Citizenship (Amendment) Act and National Register of Citizens and extracted the Ram Mandir judgment from the Supreme Court. The foremost thing that he did was to invoke the Hindu nationalist spirit among the youth by othering the Muslims. He did it to make India a Hindu Rastra.

The third thing under the BJP’s rule is its mishandling of the COVID-19 pandemic. Prime Minister made a horrendous mess of the Covid 19 management. He put the Parliament in the freezer and took control of the situation to announce a total lockdown but when it created an unprecedented economic crisis, he delegated his responsibilities to the state governments. During the lockdown period, he froze the recruitment and this led to rising in the unemployment situation. He then brought in the farm laws and made amendments to the labor laws. The Chinese occupation of Indian territories was covered up by raising the nationalist ante and he kept playing the anti-Muslim card to cover up his failures. Muslims of India were pulverized under the bogey of Hindi – Hindu – Hindustan.

After coming to power, Narendra Modi brought his own style of governance that cared a dam about democracy, pluralism, and rule of law. First, he stopped paying heed to the constitutional guarantee of equal citizenship. He stopped paying heed to the idea of pluralism and secularism. He started polarizing society on a majority and minority basis. He evolved the 80 vs 20 political formula. This politics of majoritarianism united the Hindus and ostracized the Muslims.

The Prime Minister by doing this subverted democracy, the constitution, principles of pluralism, and rule of law. In this 80-20 political paradigm, the BJP government was successful in making the Muslims the enemy of the nation. A plethora of anti -Muslim religious discrimination and persecution was started under the BJP rule that led to the dipping of Hindu-Muslim relations.

The majoritarian political ideology of hating Muslims was implemented through legitimate means; enacting citizenship laws and using the state power to suppress the Muslim protestors. It was also implemented through the subversion of government agencies and allowing non-state actors to attack the helpless Muslims. The BJP leadership allowed the rogue elements to run riot and commit brutalities against Muslims. This has poisoned the social relationship and shaken the foundation of multicultural social formation in the country.

All this happened because Muslims were the soft target of Hindus in India. Muslims’ numerical minority, social, economic, and educationally backwardness, and their dependence on the Hindu community made them vulnerable homo-sapiens. The BJP government successfully pitted the 80 % majority population against the 15% minority population where the latter have no chance to win. It’s precise because this situation of the Muslim community makes them an attractive enemy of the Hindus.

Narendra Modi has made Muslims a vanquished community who are at the mercy of the Hindu majority. Muslims are reduced to punching bags whom all and sundry can flog anywhere on the streets as the Indian state has absolved its responsibility to protect them. Perhaps, this is the reason why there is such an easy consent and consensus for the making of the Hindu Rashtra. The pivot of Hindu Rastra is Muslims on whom all blame is rested for the wrongs in India. Literally, Muslims are made the national enemy and are being purged through genocidal means.

Anti-Muslim politics over the years

India in the first two decades after Independence witnessed a glorious period of Hindu-Muslim relationship. Prime Minister Jawaharlal Nehru’s leadership saw to it that the country was steered under the principles of secularism, democratic values, and constitutionalism.

However, under Indira Gandhi’s rule, principles gave way to electoral politics. She adopted a dual policy toward the Muslims; one she cajoled Muslims with certain sops and acted as their messiah. On the other, she initiated anti- Muslims programs. Her reign is littered with communal riots in the country. Indra Gandhi reduced Muslims of India to be a Congress vote bank. She pretended to be their security provider but in reality butchered them through communal riots. Muslims even then rallied behind Congress as they thought it to be a better bet as their protector against the fascist BJP.

Indira’s son Rajiv Gandhi was a political novice. He was sucked into the vortex of vote bank politics. He innocently played into the hands of those who did the communal polarization of Hindus and Muslims. He appeased the Hindu community by opening the gates of Babari masjid and allowing the ‘Shilanayas’ ceremony to be performed for the construction of the Ram Mandir. Willy-nilly Rajiv Gandhi further pushed the anti-Muslim agenda of the Congress party.

Rajiv Gandhi’s successor Narshima Rao presided over the demolition of the Babari mosque and with that, he eroded the myth of Muslims being equal citizens of the country.

It was on the anti-Muslim platform that was built by L.K Advani’s Rath Yathra that the BJP gained power with Atal Behari Vajpayee becoming the PM of the country. Since Vajpayee headed a coalition government, he could not push the anti-Muslim agenda of the BJP or initiate the Hindu Rastra agenda. However, his unsavory comments made against the Muslims in Goa in 2002 remain etched in the memory. PM Manmohan Singh who succeeded Vajpayee tried to hold the communal balance at the center even though the six of 6 worst communal riots took place under his UPA rule. Aligarh riots in 2006, Dhule riots in 2008, Deganga riots in 2010, Bharatpur riots in 2011, Assam riots in 2012, and Muzzafarnagar riots in 2013, to name a few.

Narendra Modi has changed the entire social structure of the Hindu- Muslim relationship since 2014 when he first came to power. His anti-Muslim divisive agenda in the pursuit of Hindu Rashtra turned the Hindu-Muslim relationship where each passing day, it’s deteriorating at a breakneck speed taking it to the point of no return. Under Modi’s rule, the anti-Muslim mobilization drive has now been organically getting embedded into the grass-root level. It has acquired a momentum of its own and has relatively become free of government control. This was seen at the outbreak of communal riots in multiple laces during Ram Navami and Hanuman Jayanti celebrations in 2022.

The credit goes to the Modi government that the world is talking about today about the genocide of the Muslims in India. Under Modi’s rule, the anti-Muslim vigilantes have become autonomous centers of power. The Modi rule has given them freehand to the Hindu radicalized gangs who are masquerading as nationalists and patriots having the license to kill the Muslims.

It is to the credit of the BJP government that it has made the opposition political parties, bureaucracy, media, civil society events judiciary literally impotent characters. Either they are too scared of the BJP government or they are sucked into Hindutva politics that they have lost the will and inclination to uphold the rule of law and to protect the Muslims.

In such a situation, what the Muslim should do to salvage the tipping Hindu-Muslim relations. The choice before them is to concede to fall on the feet of the Hindus and stop fighting for constitutional rights and redefine a new relationship in the context of ‘Hindu Rashrata.’ The other option is to resist BJP’s designs and bear the brunt of being demonized, pulverized, and dehumanized and wait for ‘Ache Din.’

It is certain that the BJP government cannot push its anti-Muslim agenda beyond a certain point. The BJP knows that if they continue to do so they will be pushing India into large-scale violence and societal chaos that may have a repelling effect.

The anti-Muslim fire lit by the BJP currently has spilled over to the unemployed youth of the country. Their collective anger that recently chanted the war cry of ‘Jai Sri Ram’ against the Muslims has now changed to ‘Bharat Matta Ki Jai’ directed against the BJP. The unemployed youth are so annoyed by the Agnipath scheme of the BJP that the government is finding it hard to control.

The anti-Muslim agenda of Narinder Modi to consolidate the Hindu vote bank has reduced India into a ship on fire in the mid-ocean with ammunition on board. Undoubtedly the Hindu – Muslim relationship has reached the tipping point under the BJP rule.