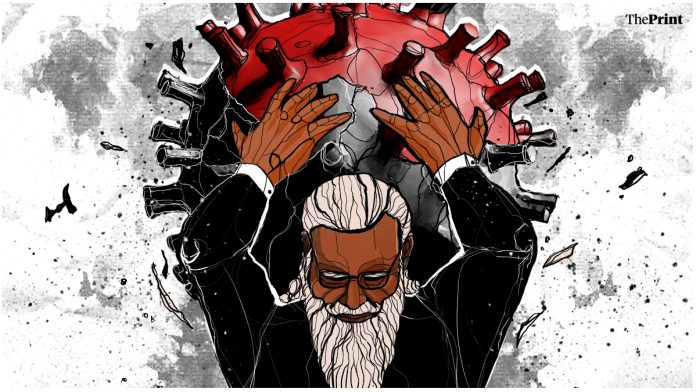 The Indian SARS-CoV-2 Genetics Consortium or INSACOG has warned the government about the new variant of SARS-CoV-2 as early as March 2021. INSACOG was set up as a forum of scientific advisers by the government in late December 2020 specifically to detect genomic variants of the coronavirus.

INSACOG brings together 10 national laboratories capable of studying virus variants. INSACOG researchers first detected B.1.617, which is now known as the Indian variant of the virus, as early as February 2021.

The INSACOG scientists had warned Indian officials of a new and more contagious variant of the coronavirus taking hold in the country.

The researchers first detected the virus which is now known as B.1.617, or the Indian variant, as early as February 2021. The B.1.1.7 a variant, which originated in the UK, was also detected in Punjab by January 2021.

The National Centre for Disease Control (NCDC) and some INSACOG laboratories determined that a massive spike in cases in Punjab was caused by the UK variant as early as March 23.

The INSACOG scientists had briefed the health ministry about two significant mutations of the virus called E484Q and L452R that were of “high concern.”

The E484Q mutant escapes highly neutralising antibodies and that L452R mutant was responsible for increased transmissibility and immune escape.” The scientist had informed that both the mutations were traced in 15-20% of the samples from Maharashtra.

INSACOG shared its findings with the health ministry’s National Centre for Disease Control (NCDC) before March 10.

The INSACOG scientists reportedly have said that despite the warning the Central government did not seek to impose major restrictions to stop the spread of the virus.

Shahid Jameel, chair of the scientific advisory group of INSACOG told the media that he was concerned that the government authorities were not paying enough attention to the evidence as they set policy. “Policy has to be based on evidence and not the other way around,” Jameel said.

“I am worried that science was not taken into account to drive a policy. But I know where my jurisdiction stops. As scientists we provide the evidence, policymaking is the job of the government,” he quipped.

The National Centre for Disease Control (NCDC) director Sujeet Kumar Singh has reportedly said that he had relayed the urgency of the matter to government officials asking for strict lockdown measures to be imposed in the first week of April as “people listen to politicians more than scientists.”

The government took no steps to prevent gatherings that might hasten the spread of the new variant, as new infections quadrupled by April 1 from a month earlier.

The National Task Force for COVID-19, a group of 21 experts and government officials set up in April 2020 to provide scientific and technical guidance to the health ministry on the pandemic also advised the need for urgent action the week before April 15, 2021. It had “unanimously agreed that the situation is serious and that the government should not hesitate in imposing lockdowns.”

On April 20, PM Modi in the address to the nation ruled out lockdown when he said a lockdown should be the last resort in fighting the virus. “We have to try our best to avoid lockdowns and focus on micro-containment zones,” he said.

Rakesh Mishra, director of the Centre for Cellular and Molecular Biology, which is part of INSACOG, laments that whatever the scientific community had observed in whatever little way should have been used in a better way but their findings were ignored by those in decision making and policy framing.

In a country where Cow Urine is propagated as Amarit that can cure all diseases and Cow dung is more precious than ‘Kohinoor’, the country is being to the dark ages by the BJP government and its Hindutva ideology.

Arrogance and ignorance is the trademark of this government. Those who are dying of Covid 19 are not dying because of destiny but they are directly being pushed to death by those ruling elite of the country.

It is one thing to be incompetent but to be proud of being incompetent is an unforgivable crime. Such rascals should be put behind the bars for the genocide they have committed controlling the state power.