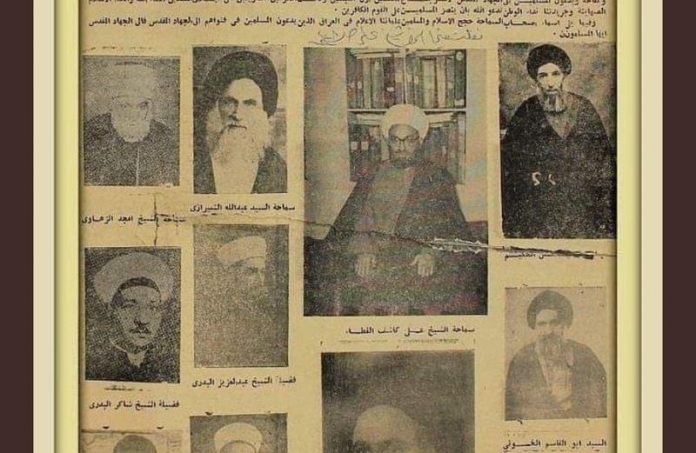 SHAFAQNA- Many years ago, Najaf Ashraf scholars issued a fatwa on the need for fight against Israel in Palestine and announced their support for the position of Iraqi President of the time, Abdul Rahman Aref, against the Zionists.

According to Shafaqna, the text of such a Fatwa and the names of the scholars who invited people to the holy fight were published in an image (which apparently is published by one of the Iraqi newspapers at the time), and the names of some of the great scholars like Ayatollah Sayyid Mohsin Hakim, Ayatollah Sayyid Ruhollah Khomeini, and Ayatollah Sayyid Abu al-Qasim Khoei were also among them.
The headline of the newspaper, titled “Allah-o Akbar”, said that the great scholars had invited the Muslims to the holy fight to reclaim their homeland and called for Islamic sanctuaries in Palestine.
In addition to publishing the names of the scholars, the statement also said: “In a message to Iraqi President Abdul Rahman Mohammad Aref, the great scholars expressed their support for the heroic stance and struggle against the Zionists and invited the Muslims to the holy fight to reclaim the land and sanctuaries of Palestine from the aggressors, the Zionists and the enemies of God and Islam.”

Following the news, the names and pictures of a number of great scholars had been published.

The name of the newspaper and its date are not clear in the picture.