First, long spells of drought pushed thousands of pastoralists out of the Garissa County and now climate change is crushing them again, as constant flooding keeps robbing them of newly acquired livelihoods.

On a recent hot and humid midday in Garissa town, 50-year-old Habiba Mohamed Hassan made a routine monitoring check on her farm in the outskirts of the town in northeastern Kenya.

Flipping a huge hijab over her shoulder, she grabbed a hoe and bent down to clear unwanted weeds from the crops. This hasn’t always been her life, she used to be a pastoralist, solely depending on livestock before famine and prolonged drought wiped them out over the last 10 years.

“I used to have hundreds of camels, goats and cattle but persistent drought and famine  claimed their lives,” says the mother of five. “So we had to find another way of sustaining our lives.”

Like many other pastoralists in the semi-arid region, she moved to the town, joined local farmers and began growing crops along the banks of the Tana River, which is the longest in Kenya, stretching over 620 miles.

However, the impact of extreme weather that forced them out of their nomadic lives is now challenging their newly found livelihoods.

A lack of rain means not enough water to irrigate the farms while too much water causes flooding that destroys their crops.

Both Garissa and Tana River counties are members of the Frontier Counties Development Council (FCDC), an umbrella regional bloc that brings together Kenya’s frontier counties to accelerate socio-economic development in the area.

“We are working very closely with our member counties to develop policies and legal framework that can assist these arid counties to cope with this [climate change] adversity,” says Mohamed Guleid, CEO of FCDC. “Farmers in Tana River face big challenges due to extreme weather conditions. We are now in the process of developing community-based water management and conservation efforts.”

When Hassan first began farming, she used to make a profit of about 100,000 Kenyan Shillings ($1,000) on a good harvest but “that is not possible now”.

“I put more money and energy on the farm and I get nothing in return these days,” she says.

“I have not had any substantial harvest in the last two years. Our lives depend on Tana River, it is like the heart that pumps blood to the rest of the body but every time it floods we lose our main source of income.

“The flood water is poisonous, it kills the quality of the soil because even after it subsides no crops grow well in the soil.”

A few miles away from Hassan’s farm along the same River, another group of farmers with the same background share similar frustrations and despair.

Haweya Haji, 60, walks on the wet sandy riverbed as she jabs her finger at the water levels.

“The level of water in this river has become erratic,” she says. “Sometimes it reduces significantly to the extent that we have to use long pipes to pump water into the farms, which means we have to buy more fuel whereas other times it overflows and destroys our hard-earned crops.”

Although they have managed to resist various climatic shocks and adapted to different lifestyles, their resilience is being put to test year-in and year-out.

“Our resilience has a limit and without external support we would not be able to cope anymore,” says Haji. “Unfortunately, local authorities in Garissa Country have not done enough to support us, just like NGOs, they come and fill up their notebooks and never come back.”

As global warming increased the frequency and intensity of extreme weather events; from the massive flooding of 1997 El Nino to the devastating 2011 famine that affected millions of people in Kenya, Somalia and Ethiopia, the lifestyles of many pastoralists in northern Kenya, like Hassan, have been changed forever.

However, switching to the new way of life was not easy. With no previous experience in farming and a lack of resources, they grappled to venture into the practice.

“It was a real struggle, we never imagined living in the town, let alone doing farming for livelihood but we did not have any other options,” says Hassan.

Her first contacts were traditional farmers in Garissa County who welcomed her to the industry and shared knowledge of the irrigation-based farming. They also helped her join self-help groups and associations.

Hassan is now in a 50-member group, most of whom former pastoralists. They contribute money towards fuel for a generator that pumps water into the farm and for other maintenance services. She grows tomatoes, pepper, limes, guava, mangoes and sundry other crops.

It was a blessing – at least in the first few years – with a viable market she was able to sell the produce to retailers and wholesale agents who in turn transported them to other parts of the region. This meant her children could go to school, pay for their fees and easily adapt to life in the town.

For some, the transition was not as straightforward, they started off practising agro-pastoralism, a form of mixed farming that involves the growing of crops and keeping of livestock.

Fifty-two year old Abey Abdille had tried to balance the two in the hope of fully returning to his livestock business but due to the unpredictability of weather patterns he was forced to abandon his nomadic life for good. “We always had hope that the droughts would end and we would recover but we gave up now,” he says. “What we have seen was extreme heat and continuous drought across the whole region.”

Abdille appears mystified by the dramatic change in the weather and irregular rainfall he has witnessed in the region. He has no knowledge of how global warming might have been responsible for the strange phenomenon he has been experiencing.

He had about a 100 camels but the 1997-98 El Nino killed most of them, he managed to recover temporarily in the years that followed but the impact of successive droughts and famine weakened his coping mechanism until he finally switched to farming.

“Previously if it did not rain in Garissa, we would go to Wajir or even as far as the border with Ethiopia and Somalia,” he says. “But that is no longer the case, every where has become dry now.”

The Greater Horn of Africa region, despite producing negligible amounts of global greenhouse gas emissions, bear the burden of climate change and are least prepared to cope with its effects.

But as leaders make alliances to solicit for funds and develop policies to tackle the growing threat of climate change, it is too late too little for people like Haji whose livelihoods have already being destroyed.

“There is no going back to livestock because we basically have none left and farming is becoming unfavorable, we don’t know what to do,” says Haji.Source: TRT World 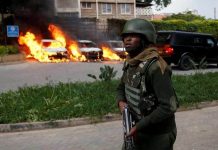