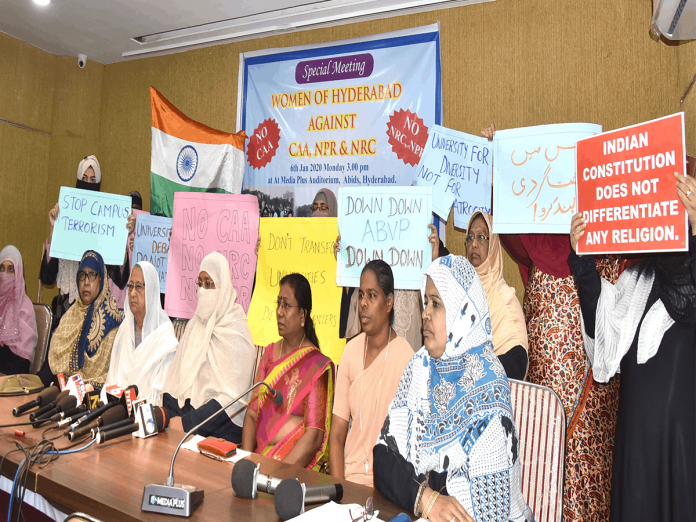 Hyderabad: A group of women organizations on Monday urged the Telangana state government to clarify its stand on NRC and NPR implementation in the state.

Addressing a press conference under the association of women through a non-religious, non-political platform ‘Hyderabadi Women on CAA-NRC-NPR Protests ’at Media Plus Auditorium in Hyderabad on Monday evening, women representing different organizations and NGOs from across the state urged the Telangana Chief Minister to “boycott the NPR and NCR, just like the Kerala CM did recently.”

They urged the CM to “pass the bill in the assembly, and reject it in Assembly, and testify the government’s support to the public against the centre’s unconstitutional move.”

The women strongly condemned the attack on JNU students in Delhi and added that “the onslaught on students and the unprecedented barbarism on students, has made the women across the nation restless. We share the grief and pain of the attacked students and their parents”. They demanded the central government to “vacate their seats” as “the government was chosen on public votes and not to beat up the public that voted it to power, the public that is our children, and the students of India.”

Speaking on the occasion, All India Muslim Personal Law Board Member Ms Asma Zohra said “The government claimed to power with our votes, and if it fails to protect our sons and daughters, it must dissolve and vacate the corridors of power. The fight and the protests are against unconstitutional moves, and to protect the constitution that is why the government must retract its unconstitutional decisions and restore peace in the nation.”

Another social activist Rafia Nausheen “Urged the citizens to refrain from submitting the documents demanded by the central government for NRC and NPR” as even minuscule errors or clerical mistakes in providing information can help the government to land them in detention centres. “Even if there are even clerical mistakes in the documents, they will be invalidated and applicants based on submitted records will be moved up to the detention centres”, she said.

The women, claimed they are working in synergy with other organizations beyond religious and political lines, against the unconstitutional acts.

Advocate Mary Alphonsia and Sister Amala Rani of Immaculate Convent also expressed her support to the sisters of the country.  Even elderly women participated in the press conference and broke down while referring to the attacks on JNU students on Sunday night. They said “we were proud of JNU, AMU, Delhi University, and universities like these. But now, our students, our children and professors and teachers are at risk of being attacked.”

“The government is stressing on Beti Padho (Educate the daughter(s)). When there is no security for our daughters, how are we even safe and how will we even think of sending them to colleges and universities”, they questioned. The recent incidents about NPR, NCR are extremely disturbing and must be withdrawn”, they urged.

Another elderly woman said “India is a traditional country. Women here migrate to villages, districts and states after marriage. How can they go back and fetch documents for NRP and NRC? There are already too many issues like domestic violence, marital issues and other troubles. The government’s decision on NPR, NCR have encapsulated the people in fear, and have further heightened the problems of women across India.”

In response to a question of political representation, they said “this is not the time for politicians and their politics. Mixing politics with a public cause may sabotage the movement”, they warned. “The international image of the country has been tarnished due to recent events, and must be restored.”

They saluted the Hyderabad Police for their “support and cooperation during the Million March held in Hyderabad” and concluded the press conference by singing National Anthem while holding placards with protest slogans.

“We are happy how there was not a single incidence of manhandling by the police during this march.  “We are proud of Telangana Police,” they said fervently before voicing slogans Hyderabad Police Zindabad (Hail Hyderabad Police) and sang the national anthem to conclude the press conference.