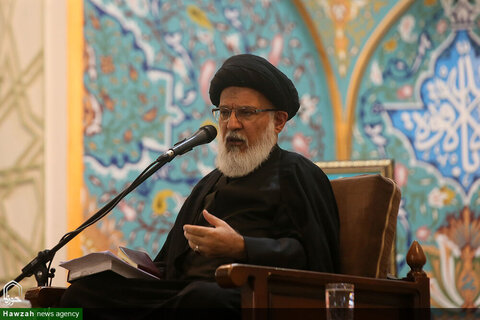 Hujjat al -Islam Sayyed Mehdi Mirbagheri, during a speech on the third night of Muharram in Lady Masuma (PBUH) shrine said, “The facts that are observed in the world, apart from the external veils also have inner and unseen events, which are recounted in the words of the infallible imams (PBUT).”

Hujjat al -Islam Mirbagheri added,” Companionship with Sayyed al-Shohada and answering the Prophet’s invitation takes place as a result of a transformation in people’s perspective on the category of death.”

The professor of the seminary pointed out,” the closeness of Ashura companions with death makes them stay by the side of Imam Hussain (PBUH) until the last moments, because he was close with death and dying next to Sayyed al-Shohada was an honor for them.”

The speaker of Lady Masuma (PBUH) shrine emphasized,” Satan had come with all his strength in the incident of Karbala to defeat the plan of Sayyed al-Shohada, and as the time approached the noon of Ashura, the moments became even more difficult for Sayyed al-Shohada (PBUH).”

Hujjat al-Islam Mirbagheri further pointed out,” the action and behavior of the Companions of Sayyed al-Shohada in the Karbala incident is unique because true loyalty and submission to the guardian of God in the universe was done by the Companions in the true sense of the word.”

Hujjat al -Islam Mirbagheri recalled,” The scenes of the journey of Imam Hussain (PBUH) in Karbala incident were very difficult, but there is no weakness in Sayyed al-Shohada and he is manifested in the beauty of such scenes.”

The member of the Iranian Assembly of Leadership Experts further said,” It is necessary to change the way people look at death and consider it as a continuation of life in order to reach the happiness in the hereafter, because the world is filled with hardships.”

The head of the Academy of Islamic Sciences went on to say that hereafter is a place of comfort and happiness for the believers, while the world is full of hardships that is why the believer considers the hardships of the world as unnecessary baggage and wishes to migrate to the hereafter with ease.”

The speaker of the Lady Masuma (PBUH) shrine concluded,” connection with God is a source of peace of heart; therefore, a believer should always strengthen his bond with Allah so as not to be attacked and harmed by the devil.”

Controversial proposal: Kaaba’s curtain in a color other than black [video]

India: Muslim women are struggling in hiring for jobs