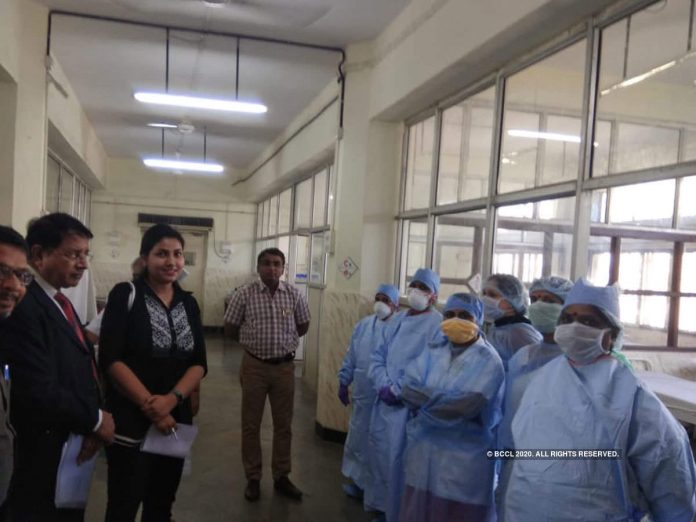 Mumbai: At two of Mumbai’s biggest civic hospitals — several relatives of coronavirus-positive patients are camping outside their rooms, and in some cases even helping with the treatment of their family members at great personal risk.

The King Edward Memorial (KEM) hospital and the Lokmanya Tilak Municipal General Hospital, run by the Brihanmumbai Municipal Corporation (BMC), are crowded with family members of coronavirus-positive patients, who have been staying outside the Covid ward for the past several days.

Some claimed that hospital authorities have asked them to stay while others are staying of their own volition. However, many of them are putting their lives at risk to take care of their relatives afflicted by the infection, as both the hospitals are facing an acute shortage of doctors and nurses in the Covid ward.

In Lokmanya Tilak Municipal General Hospital, also known as the Sion Hospital, several healthcare workers have tested positive for coronavirus while others are in isolation after being exposed to Covid-positive patients. This is why relatives had to step in and take care of the patients, said a resident doctor at the hospital.

Sion Hospital had recently grabbed headlines after a video, where coronavirus patients could be seen lying next to dead bodies, went viral on social media.

Asked to stay back by hospital authorities: Relatives

Shaukat Khan, a resident of the Sanjay Nagar settlement in East Mumbai’s Govandi, was asked to stay back by hospital authorities to help his diabetic mother who had been admitted to Sion.

Khan’s mother had initially been admitted for pneumonia but later tested positive for Covid-19. The hospital allegedly asked the 24-year-old to stay and help his mother since he was the youngest in the family and therefore, a low-risk person.

Khan said he had stayed with his mother for 11 days and slept in the verandah outside the Covid-19 ward. “I used to sit next to my mother’s bed and ensure she gets her medicines and food. I also used to regularly check her blood sugar,” he told ThePrint Saturday.

According to Khan, there were only two doctors and three nurses attending 40 patients. His mother was released on 13 May but Khan has not been tested for coronavirus yet.

ThePrint found approximately 25 such relatives, wearing just cloth masks and flimsy handkerchiefs as protection, camping outside the Covid-19 ward at the Sion Hospital.

Inside the ward, several people were sitting next to patients taking care of them.

A 34-year-old resident of Govandi, who did not wish to be named, has been taking care of his uncle for the past 10 days. The rest of his family has been quarantined but he continues to visit the hospital.

“I sit here all day and take care of my uncle. He needs to be fed and cleaned. I go back home only at night when he sleeps. I try to maintain distance with my family at home,” he told ThePrint, adding that he will get himself tested once his uncle is discharged.

Many of these family members are scared of contracting the virus themselves but are helpless since they don’t “trust” the hospital to take proper care of their patients.

A large number of patients at Sion Hospital are from Dharavi, Asia’s largest slum, which has recorded more than 1,200 cases as of 17 May.

A 38-year-old woman from Dharavi had been asked to quarantine herself after her diabetic husband tested positive for the virus and was admitted to the hospital. However, she decided to stay in the hospital as there was no one else to take care of her husband.

Her husband, a government clerk, was admitted due to high blood pressure and oxygen deficiency. He had tested negative for Covid-19 twice before his tests came positive the third time. His wife believes he contracted the disease in the ward itself.

She said there were two nurses in the ward but they were not enough for all patients. Furthermore, relatives are often roped in by hospital authorities to get blood sample results.

At KEM Hospital, one of the largest hospitals in the city, the situation is even worse.

More than 50 family members have been staying right outside the coronavirus ward at the 1,800-bed hospital, which has been treating both Covid and non-Covid patients. Some occupied the hospital benches while others sat on just a cardboard mat.

While they are not allowed inside the hospital, many of them are called to deliver medicines or test results for their virus-infected family members.

Twenty-eight-year old Soni has been living outside the ward for the past 10 days along with her sister-in-law. Her brother was admitted on 6 May after he tested positive for Covid-19.

Soni’s sister-in-law, who wished to remain anonymous, said, “My husband had typhoid, after which he caught pneumonia. He was then tested for Covid because his fever wouldn’t subside.” The rest of their family is under quarantine and they will join them only after her husband recovers.

However, Soni is worried about her own health due to the squalid conditions outside the hospital.

Additionally, the area is also overflowing with hazardous Covid waste. Over a 100-odd yellow bags filled with toxic waste are kept just five metres away from the ward.

Vishu, whose father has been admitted to the Covid ward, told ThePrint that these bags had been dumped there three days ago and nobody has cleared them since.

Caregivers not being tested

The family members of these positive patients have not been tested for the virus.

“There is a testing facility in the hospital but only doctors get tested here, why don’t they test us?” Manoj Gupta asked. The 29-year-old’s father is Covid-positive.

According to Indian Council of Medical Research guidelines, asymptomatic high risk patients of Covid-19 patients should be tested between 5 and 14 days of contact.

However, Mumbai’s testing guidelines do not allow testing of high risk contacts of confirmed cases unless they develop symptoms.

There are multiple health issues here, one is for themselves and second is for the larger issue like when they go to the pharmacy or buy food, then they carry the infection with them, said Anant Bhan, public health expert.

Bhan said, “People who are admitted are clearly infectious so to allow relatives to meet them is a public health concern and if we can’t follow protocols in tertiary care institutions what do you expect in the community?”

According to Dr Abhijeet More, health activist and co-convenor of Jan Arogya Yojana, allowing caregivers to stay in hospital wards is a serious breach of protocol.

“Caregivers, then, are at risk of infection and of spreading the infection to others, when they go back,” More said.

Caregivers are a high risk population who should be isolated and should be separated from the general population, which is clearly being ignored here, he added.

Dr Ramesh Bharmal, who replaced Dr Pramod Ingale as the Dean of Sion Hospital after the recent video controversy said that no relatives are staying in the hospital since he took over. “We have shifted 40 odd people from the hospital, no relative is allowed inside the ward,” he said.

The BMC also said that the hospital may not have allowed the relatives to stay but they were probably camping outside the ward to be nearer to their family members.

“Relatives want to be near patients in case there is an urgent need,” said Dr Daksha Shah, deputy director, health department, BMC.

On why these relatives were not quarantined, Shah said that it depended on whether they were high or low-risk contacts.