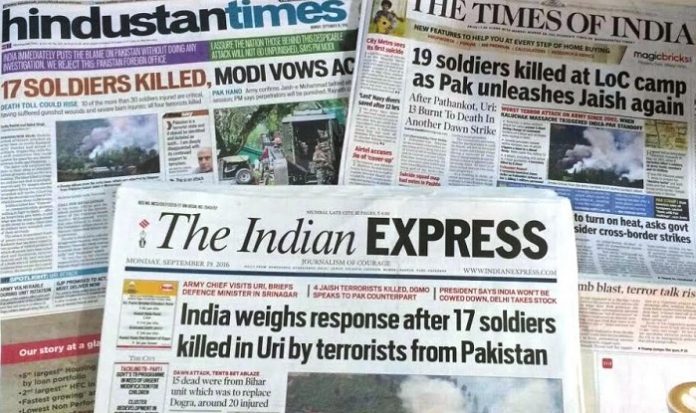 Psyched by TV anchor Arnab Goswami’s disclosures about Modi’s sinister designs on Pakistan, Indian media too has begun behaving like “his master’s voice”, if correctly called, and is now suffering from an Islamabad phobia and showing scant respect for journalistic ethics and its norms.

Minus a few, a couple to be more accurate and precise, it has been whipping a campaign that can only be categorized as hostile, revile and vituperative in nature. Tune into any of the over 200 Indian TV channels, pick up and major or minor newspapers, and there is nothing but abuses for Pakistan. Arnab Goswami, considered the BJP’s mouthpiece, somehow either by mistake, or trapped by someone more intelligent or wiser than him, released his chat in which he predicted the Pulwama attack and false flag operation against Pakistan.

A resulting storm from what he said was natural, but the Indian media, instead of showing maturity, seems to have gone berserk in its hate-campaign against the government and military in Pakistan.

The campaign is not only devoid of logic but is totally meaningless. What the Indian journalists, TV anchors refuse to see or notice is that their own government needs to be guided. The madness could not escape the world’s notice for long, and now an international forum like the UN Committee of Human Rights, or eminent magazines like The Economist and Foreign Policy has begun to highlight Indian atrocities in held Kashmir, now annexed forcibly and made part of the state called Indian Union.

The buck did not stop there. Several MPS in the lower House of British Parliament known as House of Commons, raised their voice against the mounting repression in Occupied Kashmir, demanding the government of Prime Minister Boris Johnson to take up the issue with his Indian counterpart. Instead of drawing clues from the anti-India campaign, the Indian magazine ‘The Chronicle’ became hysterical and has been attacking the widely acknowledged and circulated magazines of bringing India into disrepute.

Even the voice of sanity from Congress leader Rahul Gandhi, belonging to the Nehru dynasty, was called abusive. However, some saner elements in NDTV(New Delhi Television) advised the BJP and RSS parties to desist from being harsh on Muslims and other minorities. Ghulam Nabi Azad and Salman Khurshid’s suggestions for sanity were rejected with disdain too. The Indian media instead started attacking Imran Khan, General Qamar Bajwa, and Lt Gen Faiz Hamid for misguiding their country’s youth to be terrorists. Nothing could be farther from the truth. This is sheer propaganda, which is assuming a new dimension with every passing day and is really unfortunate.

The entire story circles around the EuDisinfo Lab whose content shook the European Union because it pointed a straight accusing finger at Narendra Modi and his government contempt towards Pakistan, and its repression in occupied Kashmir. An Indian television interviewed federal minister Fawad Chaudhry, accusing him of delivering a speech in the National Assembly, which the Indian TV anchor called ‘warmongering’. Fawad was stunned by the accusation and asked the TV host interviewing him from Delhi to have some sense and behave like an educated man. The anchor also accused the army chief of threatening India any adventure by the Indians will be given a befitting response.

This is not war-mongering. This is warning India to be cautious in their ambition to launch an aggression against Pakistan, which Modi has often spoken of. India must desist from any false flag operation, otherwise, it will learn lessons again like the one given to it on 27th February 2019 when its aggression was effectively dealt with. 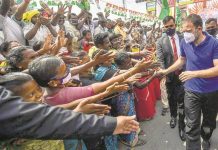 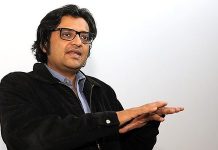 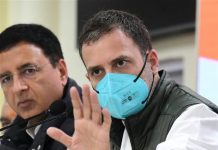 Only 5 people had Balakot info, must probe who leaked it to Arnab: Rahul