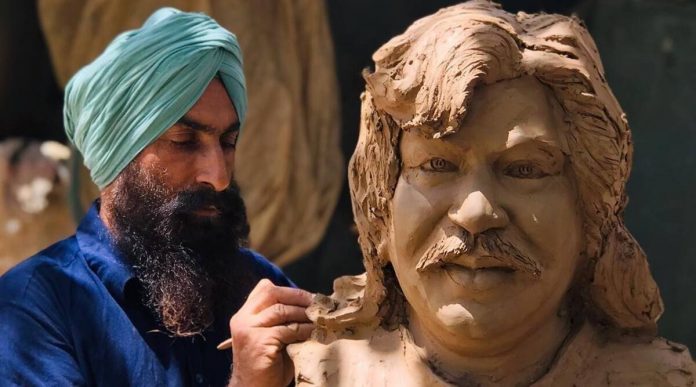 Gill has made a sculpture to honour the late artist, and according to a report by The Indian Express, the artist’s creation was installed at a park in Ghal Kalan village of India’s Punjab. It added that Ali’s death was equally mourned by the literary communities of India and Pakistan, as many of his fans recalled his prolific work.

Gill is renowned for his statues worldwide. Previously, he made a sculpture of philanthropist and humanitarian Abdul Sattar Edhi and Punjabi poet Bashir Husain Najmi, more popularly known as Baba Najmi.

Speaking to the publication, Ali’s son Imran Ali said that the singer was battling liver cirrhosis for more than a year and was being treated for it. “He had recovered but four months back his condition deteriorated again and his liver stopped working completely,” he shared.

Ali sang his first song Pagdi Utaar Chora in 1962 and received a silver jubilee award for it. Meanwhile, Dil Mohammad, known as the crusader for Punjabi language and Gurmukhi script in Lehenda Punjab of Pakistan, also passed away in Pakistan on Saturday. He was the ‘mukh sewadar’ of Baba Bulley Shah Punjabi Satth in Kasur of Pakistan and was teaching Punjabi to children since years at the school he had opened in his village, Chakk 17.

While mourning Mohammad’s loss, eminent Punjabi poet Gurbhajan Gill from Ludhiana, revealed that he used to say that the Punjabi language cannot be written in any other script except Gurmukhi and people from both the Punjabs should come together to save their mother tongue and preserve it.