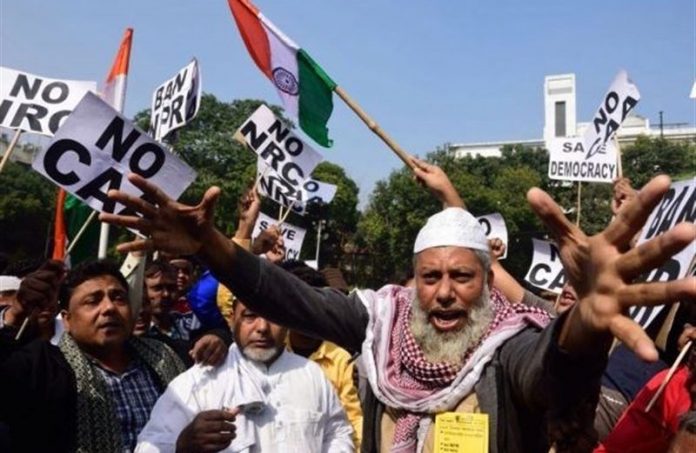 SHAFAQNA- Thousands have poured into India’s streets this month to protest the amended Citizenship Act; a controversial new law passed by Parliament this month, and often known simply as the CAA. Protesters fear the policy will shield non-Muslim illegal migrants identified by a pan-India NRC and make a large number of Muslims stateless and against minority Muslims. Dozens have been killed during the demonstrations. BJP leaders have said the government didn’t anticipate the anti-CAA protests.

The anger is extraordinary for its depth and ferocity. In protests that have spread across the world’s largest democracy, Indians of all stripes have taken to the streets. At least 25 people have been killed in clashes between police and protesters, and demonstrations against the law continue. Indians protesting against a discriminatory citizenship law are using the Constitution as a rallying cry.

Prime Minister Narendra Modi has launched a campiagn to gather support for the Citizenship Amendment Act using the hashtag #IndiaSupportsCAA. Take a look at the message his official website tweeted:

#IndiaSupportsCAA because CAA is about giving citizenship to persecuted refugees & not about taking anyone’s citizenship away.

Moreover, India’s tourism industry has been hit by a wave of violent anti-government protests against a new citizenship law that have rocked several cities this month, with at least seven countries issuing travel warnings.

The United States, the United Kingdom, Russia, Israel, Singapore, Canada and Taiwan have issued travel advisories asking their citizens to either refrain from visiting or to exercise caution when visiting regions embroiled in India’s protests, aljazeera reported.

Officials estimate about 200,000 domestic and international tourists cancelled or postponed their trip to the Taj Mahal in the past two weeks, one of the world’s most popular tourist attractions.

“There has been a 60 per cent decline in visitor footfalls in December this year,” said Dinesh Kumar, a police inspector overseeing a special tourist police station near the Taj Mahal who has access to visitor data. He said the decline was compared to December last year, channelnewsasia mentioned.

Why is the Citizenship Act controversial?

The Citizenship Amendment Act (CAA) aims to fast-track citizenship for persecuted Hindus, Parsis, Sikhs, Buddhists, Jains and Christians who arrived in India before Dec. 31, 2014, from Muslim-majority Afghanistan, Bangladesh and Pakistan.

The passing of the bill on Dec. 11 triggered widespread demonstrations in the eastern state of Assam, as protesters feared it would convert thousands of illegal migrants from neighbouring Muslim-majority Bangladesh into legal residents. Elsewhere in India, protesters say the citizenship law will be followed by the national register, which they fear is designed by the Hindu-nationalist government to expel Muslims who do not have sufficient citizenship documentation. The government has refuted those allegations and vowed to protect all citizens equally, financialexpress told.

The Indian government’s justification that the CAA offers protection to people facing religious persecution in neighboring countries is specious, according to nytimes. Critics say the law discriminates against Muslims and undermines India’s secular constitution. They question why the law does not include Muslims fleeing Sri Lanka and Myanmar, which are majority Buddhist.

The CAA has been challenged in the Supreme Court by a Muslim political party, lawyers and rights groups on the grounds that it violates the secular constitution. The Supreme Court has said it would hear petitions challenging the law on Jan. 22. On Sunday, Modi said his government had no immediate plans for a countrywide NRC, but his comments contradicted statements by his closest lieutenant, Home Minister Amit Shah. Government officials have not clarified the position.