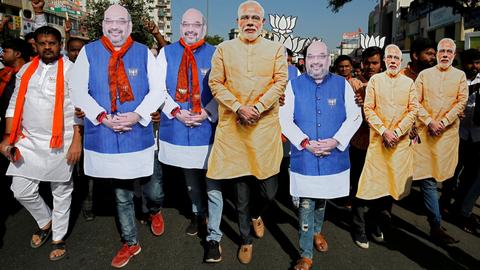 The bill, which looks all set to become law, will for the first time distinguish citizens of India on the basis of religion.

Seven decades after Independence,  India’s status as a secular nation is under a stress test with the central government led by the Hindu nationalist BJP spearheading a constitutional amendment to the citizenship law that seeks to keep out the Muslim community from its ambit.

The Citizenship Amendment Bill (CAB) looks all set to become law, with only the upper house (Rajya Sabha) vote required to pass it.  The Indian President will then affix his signature to complete the process.

The law will enable minorities including Hindus, Sikhs, Buddhists etc, but not Muslims, from Pakistan, Afghanistan and Bangladesh who came into India before December 31, 2014, to get citizenship on the grounds of religious persecution.

The proposed law goes directly against Article 14 of the Indian Constitution which prohibits discrimination on any ground including religion, race, ethnicity and gender. In other words, the constitution explicitly stands for the equality of all individuals irrespective of who they are or what they believe.

The amendment, passed by the lower house of parliament (Lok Sabha), notwithstanding protestations to the contrary by the government, completely alters the basic character of the Indian Constitution and its secular foundation.

The bill has sent waves of disbelief across the country among large sections that profess liberal values and secularism.

But it should not exactly be a surprise considering the sharp Hindu trajectory that India has taken since 2014 when the BJP (Bharatiya Janata Party, or the Indian Peoples Party) led by Prime Minister Narendra Modi came to power.

The BJP which is part of an avowedly rightwing Hindu nationalist umbrella formation, led by its mentor the Rashtriya Swayamsevak Sangh (RSS, or the Nationalist Volunteer Service), has used every opportunity to enact laws and back action that directly affects the interests of the Muslim community.

In the last five years, several states led by the BJP banned cattle slaughter or tightened existing cattle laws affecting thousands of Muslims and the marginalised Dalit community which are engaged in the leather industry and other related occupations.

Scores of mainly Muslims have been lynched by Hindu vigilante mobs on the suspicion of continuing to be engaged in cattle trade. Punishment has been rare and some federal ministers like Jayant Sinha have even openly patronised the accused.

The decision in August this year to strike off the constitutionally-guaranteed special status to Jammu & Kashmir state again shook the country and has been widely seen as yet another attempt against the Muslim community who comprise the majority there. The abrogation of its special status included dismembering the state into two less powerful union territories, or regions controlled directly by the federal government.

Since August, following the removal of special status to Kashmir, all communication links have been cut off (only limited links have now been restored) and various other restrictions are in place which amounts to a siege of the region. The economy has been hit badly and the apple trade, for instance, has all but crashed. Kashmiri apples which used to flood the rest of India are now a rarity, if not entirely non-existent.

More recently,  the long-drawn-out dispute over a temple versus a mosque on a site in the north Indian state of Uttar Pradesh’s Ayodhya town was resolved by a controversial judgment of the Supreme Court that favoured the construction of a Hindu temple of Lord Ram on the site.

The judgement was contentious as the country’s top court could not convincingly spell out the rationale behind handing over the site to the Hindu petitioners to construct a Ram temple on the disputed Ayodhya site.

A mosque, built by Mughal Emperor Babar stood on the site since the 16th century. A section of the local Hindu community claimed that it was the same spot where Lord Ram was born a few thousand years earlier.

In 1949, an idol of Lord Ram appeared within the precincts of the mosque and this boosted the demand by Hindu groups to claim a temple there. In December 1992, a Hindu mob demolished the mosque. The Supreme Court held both actions by Hindu groups as illegal. However, when it came to the final decision, it awarded the site to the Hindus.

The order is being challenged by the Muslim community.

But what shocked India’s liberal, secular sections was the perceived inconsistency and the absence of logic in the judgment. The court’s ruling has been the subject of much comment in the Indian media.

There is more to come for India’s Muslims under the BJP government. The amendment to the citizenship bill will soon be followed by what is known as the National Register of Citizens (NRC).

But, the NRC, an attempt to identify Indian citizens and weed out undocumented migrants, which was recently conducted in the Northeastern Assam state, created a huge mess. Contrary to the BJP government’s expectation that it would expose thousands of illegal Muslim immigrants, the NRC exercise turned out more Hindu illegal migrants. The BJP went into a flap and in an attempt to wriggle out of the mess, has blamed the bureaucracy and the manner in which the process was conducted.

In tandem with the Citizenship Amendment Bill, the NRC is expected to affect Muslim minorities the most. If a Muslim is not able to convince the authorities through documentation that they are Indians, they will be in trouble. For a non-Muslim, the amendment to the existing citizenship act may act as a protection.

As India stands on the throes of a new citizenship law that seeks to differentiate individuals along religious lines, there are many core values at stake including the future of this pluralistic nation with its array of  people from various religions who until recently were never legally discriminated based on their faith.

The last hope, if one may add, is that the Supreme Court will be petitioned to strike down the law on the grounds that it affects the basic structure of the Indian Constitution.