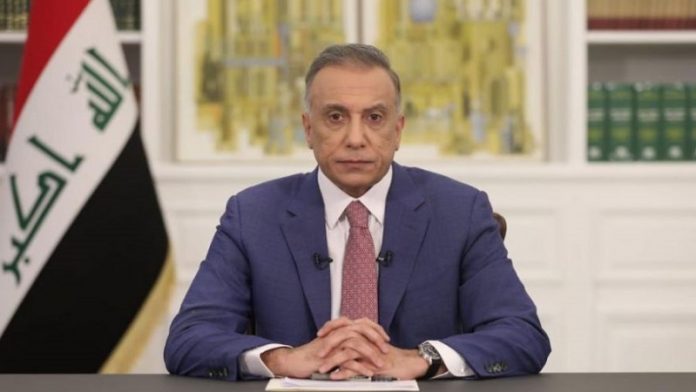 SHAFAQNA- The Iraqi Prime Minister announced his decision to hold early elections in the country in late spring and pledged to protect all currents participating in the elections.

“Mustafa Al-Kazemi”, the Prime Minister and Commander-in-Chief of the Iraqi Armed Forces, in a televised speech this evening (Friday), while stating that “Iraq is witnessing the sabotage of law-breaking armed groups, and the role of the government is to deal with the unrest and security disruption and to prevent the country from falling into the hands of these groups,” he addressed the people of his country and said: Your determination will change the face of Iraq and eliminate the effects of years of war and conflict.
Al-Kazemi also called for the protection of the lives of members of the diplomatic missions active in Iraq and the country’s supporters in the fight against ISIS as one of the main tasks of the federal government and stressed that he opposed his country’s entry into regional and international politics and he does not accept its turning into a scene of regional conflict.

The commander-in-chief of the Iraqi Armed Forces stressed the principle of non-interference in the internal affairs of neighboring countries, noting that his country needs weapons, military training and cultural and economical support more than it needs the military presence of other countries on its territory.
The Iraqi Prime Minister, while emphasizing his country’s desire to complete the first phase of the strategic talks with the United States, said: “Our criterion in the dialogue with the United States is the sovereignty of Iraq, and from the very beginning the Baghdad-Washington talk, we insisted on sovereignty and territorial integrity of our country.

Al-Kazemi announced that from the very first day of the current Iraqi government, they had formed a committee to overcome the obstacles the Independent High Electoral Commission will face, and cited the preparation for a free, transparent and fair election that would lead to a House of Representatives, who representing the will and desires of the people, as one of his government’s most important goals.

Emphasizing that June 6, 2021 has been set as the time for early parliamentary elections, the Iraqi Prime Minister pledged that nothing outside the control of the government will affect the elections and also all participating currents will be protected.