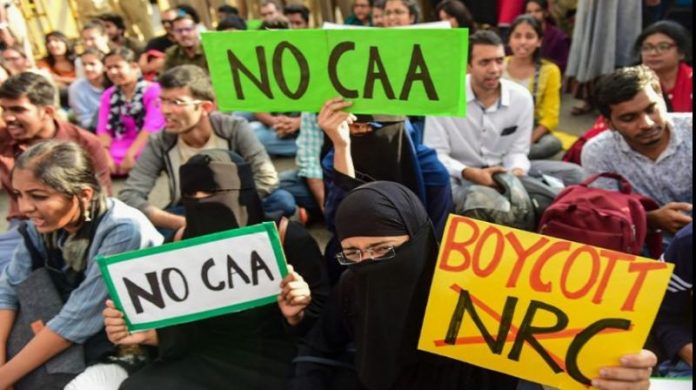 Is space for Muslims shrinking in Modi’s India !

The BJP’s rule since 2014 has shrunk the space for Muslims in India. In seven years, the party in power has changed the social architecture envisaged by Ambedkar’s constitution and has robbed away the constitutional space granted to the Muslims as equal citizens of this country.

The recent attacks on the Muslims in different parts of the country are indicative that the Hindutva elements have got the license to target the Muslims even if that means trampling the constitutional provisions of the country. Someone has commented that the BJP government has outsourced law and order to Hindutva lumpen elements.

Realistically speaking a pithy situation is developing in India where an 80-20 model of social system is being developed by the ruling B JP. In this new Varna hierarchy, 20 percent of Muslims are being pushed to ‘Sudras’ status. The message from the Hindutva brigade is Muslims have to live at the whim and fancies of the Hindu caste groups. In the new social paradigm, 80 percent of Hindus are going to lord over the 20 percent of Muslims in India. Muslims will no longer have equal status but a subservient status to the Hindus.

It is clear that Hindu- Muslim engagement in India is no more happening as equal members of this country under the BJP rule. What is clearly visible is that the socio-political cultural and economic space for Muslims is shrinking in India. The BJP government is making all possible efforts to reduce the space of the Muslims granted by the constitution framed by B.R Ambedkar.

The foremost thing that is noticed is that the BJP government is trying to shrink the political space of Muslims. In the 2019 Lok Sabha elections, the BJP emerged as the single largest party without a single Muslim MP. Similarly, in the 2022 UP Assembly elections, a lone Muslim MLA was elected from the BJP ticket. This is indicative of the fact that a deliberate attempt is made to reduce the political space of the Muslims in India.

The Citizenship Amendment Act (CAA) is an example where Muslims from neighboring countries are excluded from getting Indian citizenship. This is a signal from the BJP government that in the National Record of Citizens that’s being prepared, Indian Muslims will have to prove their identity even if they are natural citizens of this country. The fear is the National Record of Citizens may declare Muslims as lesser citizens, a practice in the colonial era that de-notified some Hindu castes and tribes as lesser citizens.

It is apparent from the way the BJP government is treating the Muslims of India that it is on the path of scripting a new constitution for the country that would declare India a ‘Hindu-Rashtra’. The new constitution may declare Muslims as second-class citizens and the BJP government will put its seal of approval by passing such a bill in the Parliament by majority votes.

The BJP government is also plotting to reduce the economic space for Muslims. Recently media reported from Karnataka banned Muslim traders from having shops near temples or during temple festivals. The saffron outfits such as Sauhardha Samithi demanded that there should be a ban on Muslim vendors opening shops near temples.

There were reports that Muslim shops near temples were vandalized by the Ram-sene, a Hindu outfit of Karnataka. There is also talk of boycotting Muslims in the fruit business. A Hindu leader called Chandru Moger of Janajagruti Samithi has urged Hindus not to purchase fruits from Muslim vendors to eject them from the fruit business. Some videos are circulating on social media showing some Hindus assembled in a temple taking a pledge not to buy anything from Muslim shops.

Such an agenda was peddled from the BJP camp to boycott the Muslim’s economic activities in the country. Right now this agenda is being implemented in the BJP ruled state but the fear is it may be replicated in other parts of the country as well. The motive is clear that the BJP government is making an attempt to reduce the economic space of Indian Muslims.

The BJP government is also attempting to shrink the religious space of Muslims. The ban on the usage of loudspeakers during Azan in Uttar Pradesh is an attempt in this direction. The issue could have been resolved through the consultations between communities but the religious angle is more obvious in the ban. The government has given to the demand of the Hindutva elements that have threatened to recite ‘Hanuman Chalisa’ when Azaan is called from the mosques. The stopping of the practice of calling Azan through the loudspeakers is an attempt to reduce the religious space of the Muslims.

In the chain of events ban on the use of the Hijab by Muslim girls in Karnataka is seen as an attempt to reduce Muslim’s space for religious freedom.

The BJP government is now attempting to restrict the food habits of Muslims. First, there was a ban on beef eating and that was controlled by cow vigilantes that did mob lynching the Muslims. Now there is a demand to ban eating meat during the Navratri festival. A BJP MP, Pravesh Verma, demanded the closing of all the meat shops during the Navratri festival across India. The Hindu nationalists did not care about Ramadan when the Muslim devout broke the fast (iftar) by eating meat as their evening meal. Such a ban during the fasting month of the Muslims is seen as shirking the space to have their preferred diet.

Similarly, a Hindutva outfit, Hindu Janajagruthi Samithi in Karnataka demanded a ban on halal-certified products. It stated that animals are killed by offering them to Allah that’s offensive to Hindus. It demanded a ban on Halal meat consumption in India. The ban on halal meat is yet another attempt to reduce the dietary practices of Muslims.

The BJP is also attempting to shrink the linguistic space for Muslims in India. This can be seen in the way the treatment is meted out to the Urdu language in the places where it’s spoken in the country. Urdu is an Indian language that has evolved in this subcontinent but now has become a sore point of some Hindus who view it as a language of the Muslims.

A deliberate attempt is made to restrict the usage of Urdu as a lingua franca in many north Indian states. In fact, the pressure on Muslims is so much to detest speaking Urdu that they have stopped studying the Urdu language and have adopted Hindi as their mother tongue so that they can get assimilated into the Hindu linguistic way of speech.

There is an outlandish demand being made by the Hindutva elements to boycott the Bollywood films for their usage of the Urdu language. Social media posts are witnessing Hindu right-wing groups demand to remove Urdu from Hindi films. Some Hindu organizations are outraged that the usage of Urdu in the Hindi films does not respect the Hindu culture and they have given a call to use more Hindi words in Hindi films.

There is also a demand made to boycott Muslim actors, poets, and technicians involved in the making of Hindi films. The Hindutva elements have given a call to boycott the Hindi films if it does not shed the Muslim burden. The demand to reduce the usage of Urdu in Hindi films is yet another attempt to reduce the space of Muslims in popular culture.

These are a few points that are quite visible under the BJP rule to make the assertion that the current political dispensation is attempting to shrink the socio-political cultural space of Muslims in India. It appears that the BJP government’s sole mission is to deny Muslims of India the right to have a dignified life in their own motherland.

This phenomenon is addressed by VS Naipaul who has called this a cry of “Wounded Civilization.” Samuel Paul Huntington has called this, “A Clash of Civilization.” Francis Fukuyama calls it, “Identity: The Demand for Dignity and the Politics of Resentment.” To me, it’s, “Post-Truth India- The Brand new Republic.”

India Entering the Stage of Muslim Genocide, Warns an Expert from the US