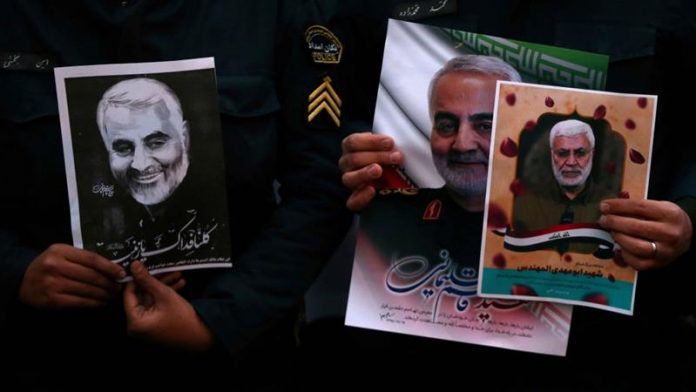 The White House was provided with important details from Israeli intelligence and carried out the airstrike without congressional support or knowledge and without providing a shred of evidence that Soleimani was planning attacks on American’s and US embassies.

The lie that was told to the American public (and by extension the world) by the Trump administration is that Soleimani was an imminent threat and was planning terror missions targeting American’s, US soldiers, and US embassies, and in order to thwart his plans the US had to act quickly and assassinate Iran’s top military official.  During President Trump’s speech to the nation on Wednesday he accused Soleimani of directing recent attacks against US personnel in Iraq which injured four and killed one American.

In an interview with Fox News that aired on Thursday, Pompeo said

“There is no doubt that there were a series of imminent attacks that were being plotted by Qasem Soleimani,”

He went on to say,

Maybe it’s just me, but without having any specifics whatsoever Pompeo’s statements do not make Soleimani sound like a “real” threat, if anything this solidifies the notion that the White House used a lie that lacks any evidential backing to bring us inches away from war with a nuclear regional power.

Iraqi Prime Minister Abdul-Mahdi called the assassination of Soleimani and al-Muhandis an act of aggression against Iraq and the Iraqi people, and a flagrant violation of Iraqi sovereignty, and stated it was a dangerous escalation. Since then US troops have been asked to leave Iraq but the request has fallen on deaf ears. Iraq does not want to become a battlefield for war between the United States and Iran.Trump Reviewing Target Lists as Iran War Threat Mounts

Lt. General Soleimani was an instrumental figure in the fight against Daesh (ISIS) in Syria and Iraq and saved countless Christian and Muslim lives by thwarting missions that put their civilian lives in danger. However, as is the case in many of Washington’s manufactured pretexts used to justify unwarranted wars and invasions, heroes are vilified and terrorists (along with their sponsors) are revered.

It’s particularly interesting to see ISIS, Israel, and the United States on the same side when it comes to Soleimani’s death. A weekly ISIS newspaper called al-Naba praised the assassination and called it “divine intervention” “an act of God” and stated that Soleimani’s death will assist their efforts to regroup in Iraq. It’s blatantly obvious that ISIS saw him as a deterrent while Washington painted him to be the “number one terrorist”. This further illustrates how Washington’s alleged “war on terror” is nothing more than an excuse to invade countries and control their natural resources all while bolding Israel.

The United States has essentially been at war with Iran since the US-backed Shah Muhammad Reza Pahlavi was overthrown in 1979 and has engaged in acts of war against Iran through economic sanctions and other means throughout the years.

In 2018, President Trump unilaterally withdrew from the Joint Comprehensive Plan of Action (JCPOA) and reinstated crippling sanctions under its maximum pressure campaign. After waiting a year for the United States to come back to the nuclear deal or negotiate new terms, or at the bare minimum for the European nations that are signatories on the deal to offer sanctions relief to no avail, Iran started scaling back its commitments under the nuclear deal every sixty days.

Clearly the current administration does not intend to come back to the JCPOA, nor do they intend on lifting harsh sanctions, nor do they want to negotiate changes to the existing deal or propose a new nuclear deal till the JCPOA expires.

In response to Soleimani’s assassination, Iran fired 15 ballistic missiles at two Iraqi bases which housed not only Iraqi but US soldiers as well, one military base was specifically targeted because that’s where the attack against Soleimani was initiated. US officials and Pentagon officials believe that Iran deliberately avoided incurring any loss of life. Iran’s intention was not to kill American’s but instead to show its target accuracy, and Washington’s inability to protect their bases and that US defense and interception systems are not as effective as they boast, also that Iran is willing to take measured and calculated retaliation when it deems necessary.

De-escalation soon followed with neither side interested in further military action, President Trump opted for more harsh sanctions and called for NATO to step up their involvement in the region.

Iran has claimed responsibility for the tragic unintentional downing of a Ukrainian passenger plane which took the lives of 176 civilians aboard. A series of unfortunate events led to this grave human error which was due to heightened tensions between the United States and Iran.

Since this admission, protestors have taken to the streets to demand that President Hassan Rouhani step down, without delay President Trump and Israel’s Benjamin Netanyahu publicly stated their support for the protestors.

Washington and Tel Aviv’s ultimate goal remains regime change, whether it’s done internally or externally, ousting the current Iranian administration and installing a puppet leader is of top priority. Iran wants to limit US presence in the region and stands in the way of US expansion, hegemony, and control of resources. Iran’s opposition to the Israeli occupation of Palestine is another reason why the US has incessantly vilified Iran on the global stage and labelled them as their number one enemy.The original source of this article is Global ResearchCopyright © Sarah Abed, Global Research, 2020