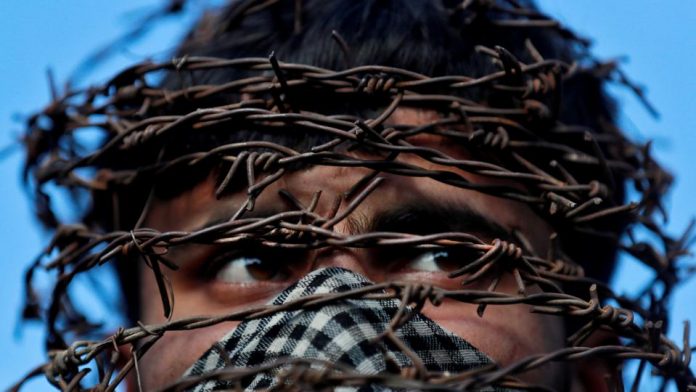 On April 19, the police in Indian-administered Kashmir booked a 26-year-old female photojournalist Masrat Zahra, under the ill-famed Unlawful Activities Prevention Act (UAPA) for her involvement in “anti-national activities” on social-media.

The Srinagar Cyber Police Station accuses Masrat of “denting the image of law enforcing agencies and causing disaffection against the country.”

The police cited a photograph she had posted on social media from an article she photographed for The New Humanitarian. Masrat had photographed a Kashmiri woman whose husband had been killed by Indian forces for alleged militant connections. Peerzada Ashiq and Gowhar Geelani, two senior journalists, were next to be booked. Umar Khalid, Meeran Haider and Safoora Zargar are other activists that have also since been booked.

But is India’s censorship on the media in Kashmir surprising? No. Every colonial regime keeps a reign on a free press because journalism means disseminating facts and facts incriminate regimes.

Facts jeopardise the writ of the state, its propaganda and distortion of reality. Facts damage India’s carefully contrived image of being a secular-democratic state. Facts are “anti-national”. Facts cannot be jailed. But people who bring facts forward can be.

Masrat is not the first Kashmiri journalist who has been hounded by the authorities. In July 2018, an accredited journalist named Aquib Javaid was interrogated by the National Investigation Agency for interviewing resistance leader Asiya Andrabi.

Kamran Yusuf, another photojournalist who has been documenting the conflict in Indian-administered Kashmir, was arrested on September 5, 2017, for “anti-national” activities. He remained in detention for around six months, thousands of kilometres away from home.

Tellingly, authorities questioned Kamran’s journalistic credentials because “he never takes any pictures of government developmental projects.” The Indian state is asking journalists to moonlight as the government’s public relations arm.

On August 31, 2018, the police announced the arrest of Aasif Sultan, a well-known journalist, accusing him of “harbouring known terrorists”. He was booked under various sections of the Ranbir Penal Code and the Unlawful Activities Prevention Act (UAPA), an Indian anti-terror law that India has been routinely used to stifle the freedom of expression, as in the case of Masrat Zahra.

On July 1, 2017, Aasif Sultan wrote a story titled “The Rise of Burhan” which covered the life of a popular young militant commander, Burhan Wani. It was this piece that led to Sultan’s arrest.

When he applied for bail, the police presented his Facebook account as prima facie proof in the application to reject bail. He remains under detention at Central Jail, Srinagar.

Sultan’s daughter was eight months old when her father was arrested in August 2018. She is two and a half years old now and has only seen her father handcuffed – dressed as a prisoner.

One of the most common accusations the Indian state makes against journalists in Kashmir is that their writings incite “disaffection towards India”. The reality, however, is that it is the criminality of India’s rule in Kashmir that, by nature, elicits disaffection and defiance. When a journalist writes about it, he is only reflecting a ground reality.

In George Orwell’s novel 1984, “Big Brother” punishes citizens for “thoughtcrimes” — the crime of thinking something that is unacceptable to “Big Brother”, something seditious or as the Indian government would like us to say, something “anti-national”.

I sometimes wonder if it is a mere coincidence that Orwell wrote 1984 within two years of India’s occupation of the Himalayan region, Kashmir. As in Oceania, India makes use of “thoughtcrime” laws such as the Public Safety Act and unlawful Activities Prevention Act to censor every fact, or opinion, that may challenge the statist narrative about Kashmir, or imperils ‘democratic’ India’s international image.

Orwell envisioned a state in which people eventually censor their thoughts. He called this crimestop, meaning “the faculty of stopping short, as though by instinct, at the threshold of any dangerous thought.” By detaining political dissidents and intimidating journalists, crimestop is what India aims to instil in people. The state wants journalists to claim that black is white, contradicting apparent facts.

In April 1990, Governor Jagmohan, who was dispatched to Kashmir during a mass uprising against Indian rule, banned the Urdu language newspapers Al Safa and Daily Aftab among others for their coverage of massacres. That tradition continues to this date.

Local cable news broadcasting has been banned since 2010 and printing press offices have been seized. On October 2, 2016, in the wake of a popular civilian uprising for self-determination, the Jammu and Kashmir government barred a well-read newspaper, the Kashmir Reader, from publication for three-months for being “anti-state” and “anti-establishment”.

The paucity of a robust private sector has meant that newspapers in Kashmir mostly rely on revenue from government advertisements. For decades, ad revenue has been used to control media in Kashmir. Consequently, media outlets that parrot the statist narrative are given an abundance of advertisements while the remaining are divested of them.

On February 22, 2019, the Jammu and Kashmir government terminated advertisements to Greater Kashmir, a popular English Daily.

Another method of stifling the press in Kashmir is registering First Information Reports, or FIR’s, against newspapers for their reportage. As a result, the most widely read newspapers are not carrying editorials that the state may take a dim view of. For a newspaper to survive, it must act as the Orwellian Ministry of Propaganda.

The press will be free when Kashmir is free.

For colonised people, as Frantz Fanon states, “the individual’s breathing is an observed, an occupied breathing.” Journalism, like everything else, is observed, redacted, and occupied in Kashmir.

Disclaimer: The viewpoints expressed by the authors do not necessarily reflect the opinions, viewpoints and editorial policies of Shafaqna.