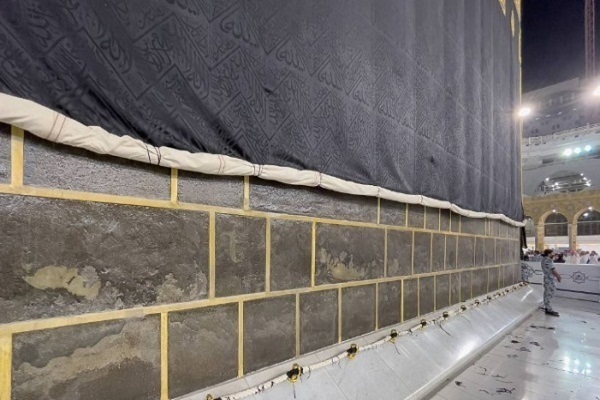 In a ceremony on Sunday (19 June 2022), the Kiswah of Kaaba was raised by three meters as an annual custom at the beginning of Hajj season. Preparing the holy mosque for the 1443/2022 Hajj pilgrimage, Saudi officials raised the Kiswah and covered the two-meter-wide white cotton cloth (Ihram) on all four sides.

The custom marks the beginning of the Hajj season each year while also acting as a precautionary measure to protect the Kiswah against the touches of pilgrims during Tawaf. Led by Abdulrahman Al-Sudais, General President for the Holy Mosque and the Prophet’s (PBUH) Mosque, a team of more than 50 people conducted the custom.

Kiswah is draped annually on the 9th day of the month of Dhul-Hijjah on the Islamic calendar. The time coincides with the day Muslim pilgrims leave for the plains of Mount Arafat during the Hajj pilgrimage.

It covers the Ka’aba, the most sacred Islamic site, which attracts millions of Muslims to Mecca every year during the Hajj pilgrimage. All Muslims around the world face the Ka’aba during their daily prayers.

Every year, the old Kiswa is removed, cut into small pieces, and given to individuals such as visiting foreign Muslim dignitaries as well as organizations.

In the past, the Kiswah was divided and distributed among the families known as the Ka’aba curtain holders. Later, the Saudi Arabian government decided to send the Kiswah to different Muslim countries as a gift.

The Kiswah, which is black, is made up of 670 kilograms of raw silk with verses from the Quran woven in gold-plated thread. The verses are woven using 120kg of gold and 100kg of silver threads. The belt of the Kiswa is made up of six pieces.

Video: The role of the mother in raising...