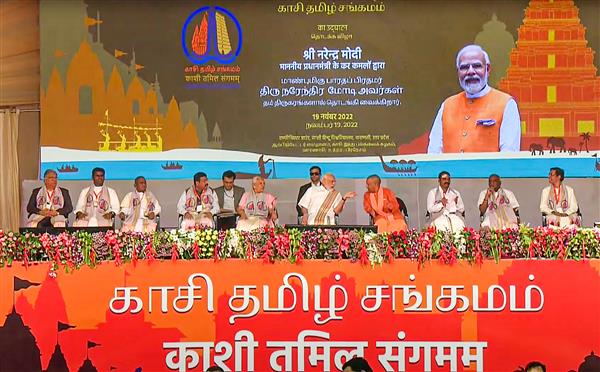 It is the responsibility of 130 crore Indians to preserve the legacy of Tamil and ignoring it will be a great disservice to the nation, Prime Minister Narendra Modi said on Saturday as he stressed on “removing linguistic differences and establishing emotional unity”.

In his inaugural speech at the Kashi Tamil Sangamam here, the prime minister lamented that despite having one of the world’s oldest living languages, Tamil, “we lack in honouring it fully”.

“This is the responsibility of 130 crore Indians to preserve the legacy of Tamil and enrich it.

”If we ignore Tamil we do a great disservice to the nation and if we keep Tamil confined in restrictions, we will do great harm to it. We have to remember to remove linguistic differences and establish emotional unity,” Modi said.

He hailed Kashi and Tamil Nadu as timeless centres of culture (‘sanskriti’) and civilisation (‘sabhyata’).

Both regions are also the centres of the world’s oldest languages like Sanskrit and Tamil, the prime minister noted.

In Varanasi, addressing the ‘Kashi-Tamil Sangamam.’ It is a wonderful confluence of India’s culture and heritage. https://t.co/ZX3WRhrxm9

— Narendra Modi (@narendramodi) November 19, 2022
“In our country, there is an importance of ‘sangams’ (confluences). From the confluence of rivers and streams to ideas-ideology, knowledge-science and societies-cultures, we have celebrated all the confluences,” he said.

The Kashi-Tamil Sangamam is a celebration of India’s diversity and uniqueness. It is special on its own and is unparalleled, he said.

While cultural capital Kashi has encapsulated entire India, “our Tamil Nadu and the Tamil culture represent the pride in India’s ancient legacy.