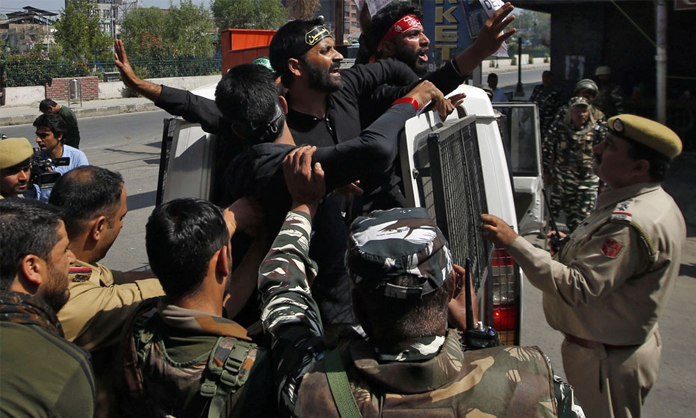 Over many years, the struggle for Kashmir’s freedom continued. Kashmiris’pain increased, and their sacrifices multiplied. It is true that their heart is traumatized; it is true that it bore the tightened chains of oppression and it is true that all their sufferings mark the violations of human rights, but they never gave up on their dreams of freedom, no matter how difficult it was.

The Jammu and Kashmir conflict is an unfinished agenda of the partition of the Subcontinent. The Maharaja’s indecision about Kashmir’s land, soon after partition, resulted in the Indian forces invading almost two-thirds of Jammu and Kashmir’s Muslim majority area while the Kashmiri people with the help of Pakistan revolted against the occupied forces, and began their history of struggle for self-determination. Further, New Delhi and Islamabad have engaged in three wars, i.e., the wars of 1948, 1965, and 1971 over Kashmir since the partition in 1947. Some Kashmiri groups resisted Indian rule in their quest for independence or the consolidation of Pakistan.

In 1950, India agreed to amend its constitution to grant special status to the part of Kashmir that it administers. India’s only Muslim-majority state for the last 73 years has been a betrayal of the will of the Kashmiri people. Thisc has been a sharp-edged reality. 5th August 2022 marks one year of yet another such betrayal. Minister of Home Affairs and the First Minister of Co-operation of India, Amit Anil Chandra Shah, told Parliament that Article 370 was revoked; Kashmir was stripped of its special status. Already frosty relations have worsened between the two countries since India abolished Jammu and Kashmir’s limited autonomy on 5 August 2019.

The continuing atrocities in Indian Occupied Jammu and Kashmir manifest the anti-peace and anti-Muslim “Hindutva” agenda of the extremist Rashtriya Swayamsevak Sangh-Bharatiya Janata Party (RSS-BJP) dispensation. India has not reciprocated Pakistan’s attempts toward harmony and stability. The oppressed Kashmiris were the target of the wrathful Hindutva. The Valley was flooded with tens and thousands of trigger-happy soldiers. Brutal crackdowns, unlawful arrests, barbaric killings, and forced abductions made a mockery of India’s dubious secular conscience. Immediate lockdown and a curfew were imposed, putting the Valley behind a curtain of terror so the globe would not learn the truth all in vain.

IIOJK’s human rights situation has deteriorated following 5th August 2019 India’s unilateral and unconstitutional acts. For nearly two and a half-year, the brutal military siege has martyred thousands of Kashmiris and used brute force against Kashmiri children and women in indiscriminate manners. The Kashmiri youth has been notably attacked in their campaign of relentless oppression. The most brutal depictions of this are the use of pellet guns and eradication of entire regions, adding cumulative punishments to people in IIOJ&K. Thus, the people of Indian Occupied Kashmir have never admitted this illegitimate invasion.

Indian violence and brutality have failed to free the people of Indian Occupied Kashmir (IOK) from Indian captivity. Four generations of Kashmir have witnessed unimaginable atrocities at the hands of occupying soldiers and have made incredible sacrifices. India is oppressing Kashmiri women, children, and men by imposing extensive security forces under the Draconian law of “The Armed Forces Special Powers Act”. In addition to this, the world has witnessed 94,000-plus deaths, with over 7,000 being held prisoner, while more than 10,000 women were raped, and 107,000 children orphaned. Therefore, India, the largest democracy, is mocking universal principles like equality and justice, liberty, and humanity. People around the world are intensely affected and concerned at the incessant killing rampage, arbitrarily detained Kashmiris and human rights defenders, as well as the rejection to hand over the mortal remains of martyrs by Indian occupation forces.

No matter how much military is there if we could remember the first attack on the Holy Kaaba in which the elephants of Abraha came, Allah sent the smallest birds, the Ababil, and they bombarded the Ethiopian forces and smashed them like “eaten straw”. It is not always that power is counted by power. Therefore, willpower, determination, and hope are all required to win a war, and this is a war of power against human beings. It’s a human tragedy, and this is a tragedy for which our hearts also bleed. Thus, in the hearts of every Pakistani, there is a Kashmir.
It was not a century ago when the world silently witnessed the rise of the Nazis and today the same silence is evident when we see Gandhi’s state becoming the nightmare that Savarkar envisioned. Thomas Jefferson rightly said;

“All tyranny needs to gain a foothold is for people of good conscience to remain silent.”

– Advertisement –
Today, what we are seeing is that international involvement is so conducive for India that it can commit a human rights violation and easily get away with everything it does in Kashmir. Kashmiris are been murdered and have been the victim of brutality and extrajudicial killings, but the world has lost the passion for justice and empathy for the oppressed.

Therefore, all peace-loving international organizations and the United Nations must pay attention to Modi’s movements against peace. Pakistan’s government, and armed forces on the Kashmir issue, have constantly spoken on every platform. Thus, Narendra Modi should note that he can’t trample the courage of the freedom of Kashmiris with brutality.

In a nutshell, Kashmir is an unfinished agenda of the Partition of the subcontinent and the way Pakistan has been wronged, the way we have been parted from our own relatives, from our own brothers, it is the same families that are divided on both the sides of the Line of Control (LOC). We feel their pain; we feel their agony. It is an unleashing of human tragedy and human atrocities. So many crimes have been committed; the occupation is illegal, and the annexation of the territory is illegal. Eventually, there’s no power greater than human power.

No matter how much military is there if we could remember the first attack on the Holy Kaaba in which the elephants of Abraha came, Allah sent the smallest birds, the Ababil, and they bombarded the Ethiopian forces and smashed them like “eaten straw”. It is not always that power is counted by power. Therefore, willpower, determination, and hope are all required to win a war, and this is a war of power against human beings. It’s a human tragedy, and this is a tragedy for which our hearts also bleed. Thus, in the hearts of every Pakistani, there is a Kashmir.