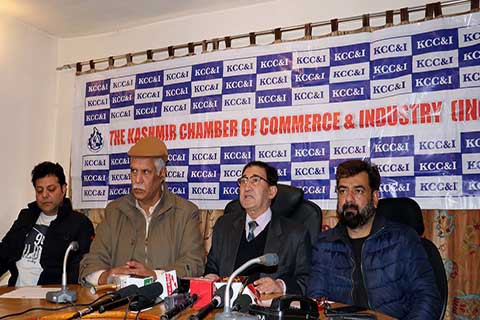 Vice-president of KCCI, Dr AM Mir said business community in the valley has been suffering huge losses since the floods of 2014 and a “congenial atmosphere” was needed for trade.

“Our economy is on the brink of getting finished as trade and commerce has taken a backseat,” Mir told reporters during a press conference here, adding domestic and international market pressures coupled with the situation at home “has broken our back.”

“We need an alternative to frequent strikes as this will infuse some life into the businesses.”

The trade leader said authorities must allow peaceful protests, announcing KCCI plans to hold a peaceful protest rally from its office to nearby Press Enclave on Saturday and described detaining business leaders as “repressive tactics” of the administration.

Mir said KCCI has formed a committee in order to make assessment of losses suffered by different sectors due to the prevailing fragile situation in Kashmir.

“We will be conveying these business loss assessments to the state budget committee,” he said.

“The fact that GST and demonetisation along with the uncertainty in the valley has taken a toll on day-to-day business, there needs to be steps from the government to provide us a suitable environment for trade and business.”

Mir said tourist arrivals have sharply declined over the last few years, ascribing it to “negative portrayal” of the valley that needed to be changed.

“Talk about handicrafts, hospitality, tourism or general trade, we are at the receiving end. If corrective measures are not taken to work for return of peace we will be vanished financially,” Mir said.

“We are a consumer state and vastly dependent on supplies of goods from outside. Being located at the far end there are logistical problems that the business faces as well. In addition disturbance in situation makes matters worse.”

Commenting on recent SAC decision of making J&K Bank a public sector undertaking, Mir said the Governor’s administration should take all measures to “save the institution”.

“It is not just a bank but an institution that works for larger interest of the common people, so it must not be destroyed by making it a PSU,” Mir said.

“This is of utmost concern to us as even 18-month old child has not been spared from loss of eyesight,” the KCCI statement said.

“The business community has been under great stress on account of repeated turbulences in Kashmir. We are not getting a favorable atmosphere of conducting business on account of these impediments and all our sectors are badly hit,” the statement added.

Appealing to the administration the KCCI said “that within the ambit of promotion of trade, commerce and industry which is already under stress, a peaceful environment is needed to be established so that lives of innocent people are safeguarded.”

“Let peaceful activities be allowed to be conducted in this regard,” the KCCI statement said.

Carcass is important than killing of Inspector: Bulandshahr police

Jammu & Kashmir all set to come under...