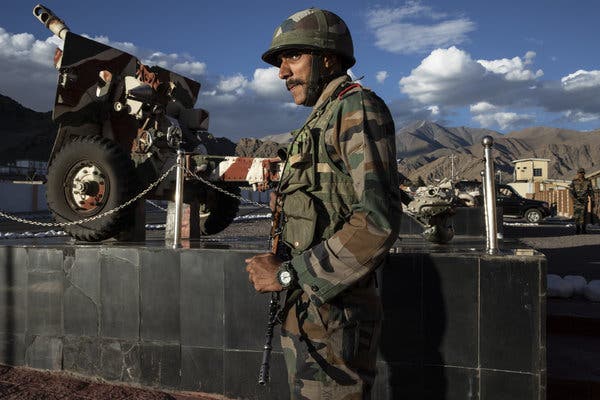 When the Indian government last year abrogated the special status and partial autonomy of Indian-administered Kashmir and divided the region into two federal territories – Jammu and Kashmir, and Ladakh – the Buddhists in Ladakh cheered the move.

A year later, that sense of celebration in Ladakh has given way to uncertainty and apprehension among residents of the Himalayan desert. The euphoria over becoming a federal territory has been replaced by a fear of losing lands, jobs and identity.

Buddhists and other non-Muslim communities in the Himalayan region had long demanded a union territory status, alleging they were discriminated against by the politicians and bureaucrats in the partially autonomous Jammu and Kashmir, which was the only Muslim-majority state administered by India.

Situated at an altitude of 5,730 metres (18,799 feet) above the sea level, Ladakh is home to nearly 300,000 people living in two districts – the main city of Leh which is predominantly Buddhist, and Kargil, which is mainly Muslim.

On August 5 last year, Prime Minister Narendra Modi’s government scrapped Article 370 of the Indian constitution, which provided a degree of autonomy to the part of the disputed Kashmir region that India administers, while Pakistan administers the other part. Both countries claim Kashmir in full.

A day later, on August 6, Jamyang Tsering Namgyal, a BJP member of parliament from Ladakh, praised the move in a fiery speech in parliament, saying his community had long called for it.

“If Ladakh is today underdeveloped, then Article 370 and [the opposition] Congress party are responsible for it,” the 35-year-old leader said, drawing compliments from Modi, who called it “an outstanding speech” that presented the “aspiration of our sisters and brothers from Ladakh”.

Article 370 ensured the protection of jobs, land and culture of Jammu and Kashmir. Its accompanying provision – Article 35A – barred outsiders from buying land or applying for jobs in the semi-autonomous region.

With the special status gone, even Ladakh’s BJP leaders are furious.

“Earlier, like the people of Jammu and Kashmir divisions, we Ladakhis were also protected from outsiders by Article 35A. Now that the protection is gone after the bifurcation of the state, we are vulnerable to outsiders who will come and buy our land and take our jobs as well,” Chering Dorge, former Ladakh BJP president, told Al Jazeera.

Dorge, who resigned from the Hindu nationalist party in May, says the Ladakh Autonomous Hill Development Council (LAHDC), an elected body that controls public land in Leh, had been reduced to a “toothless tiger” after the region was turned into a union territory.

“Currently the state land rests with the council, not with the union territory administration and we fear that this land may be transferred to industrialists or the army without the consent of the council,” he said.

Amid such fears and anxieties, Ladakh residents are demanding constitutional safeguards.

In a surprise move last month, the BJP’s Leh unit passed a resolution in the LAHDC, seeking the protection of jobs, land rights, businesses, environment and cultural resources for the locals.

That protection, they say, can be ensured either by their inclusion in the Sixth Schedule of India’s constitution, which gives special rights to the country’s tribes or by extending Article 371, which provides a degree of autonomy to the tribal regions mainly in India’s northeast.

According to official data, 97 percent of Ladakh’s population is tribal.

“Sixth Schedule is the only safeguard provision within Indian constitution which seriously protects the tribal communities,” president of the opposition Congress party in Leh, Tsering Namgyal Tsangpa, told Al Jazeera.

Dorge said people in Ladakh fear that New Delhi can change or pass new laws without their approval since “most of the people running the show of the union territory administration are not from Ladakh”.

A different story in Kargil
However, as the demands for the Sixth Schedule and other constitutional safeguards gain momentum in Leh, there is little support for the movement in the Kargil district of the region.

Contrary to the popularly held idea within India that Kashmir has a Muslim majority while Jammu is mostly Hindu and Ladakh is mostly Buddhist, Buddhists form 39.7 percent and Hindus 12.1 percent of Ladakh’s population.

Muslims, an overwhelming majority of them Shia, comprise 46.4 percent of Ladakh’s population.

Asghar Ali Karbalai, former state legislator from Kargil and twice the chairman of the district’s autonomous council, told Al Jazeera the people in Kargil will not support the demands for the Sixth Schedule or constitutional safeguards as demanded by the Buddhists in Leh.

“In the existing circumstances, we are not for any domicile law or anything else but a full-fledged statehood to Ladakh,” Karbalai said.

“The government of India wants to implement the RSS agenda here which is to divide the erstwhile state of Jammu and Kashmir in the name of region, religion and language,” he said.

The RSS stands for the Rashtriya Swayamsevak Sangh, the far-right ideological mentor of the BJP, which was formed in 1925 on the lines of the German Nazis and aims to make India an ethnic Hindu state.

Nasir Munshi, a Congress party leader in Kargil who is also the secretary of the Kargil Joint Action Committee formed to protect the region’s autonomy, accused the BJP government of ignoring their voices and only “giving importance” to Leh.

“Leaders, ministers and policymakers from New Delhi only visit Leh. Nobody is coming to Kargil and asking us what we want,” he said.

“As far as the perspective of people in Kargil is concerned, we never accepted the union territory status. It was enforced on us.”

Recently, several political parties and social organisations in Leh came together to form the People’s Movement for Sixth Schedule for Ladakh.

On September 22, the group passed a resolution, threatening to boycott the council election in Ladakh which would be held on October 16 unless constitutional safeguards under the Sixth Schedule are announced.

But Madhav was welcomed in Leh on September 24 with a shutdown in protest against local BJP leader Ashok Kaul’s remarks that the resolution was “nonsense”.

Speaking to Al Jazeera, Kaul claimed people in Leh were “very happy” with last year’s decision to remove the special status of the region and that only a few people were protesting the move.

“The central government has assured [a delegation from Leh] that Ladakh will be granted constitutional safeguards which would be more than the Sixth Schedule,” he said.

Political commentator and analyst Siddiq Wahid told Al Jazeera that people in Ladakh had demanded union territory status along with an elected legislature.

“The surprise people in Ladakh got was in the fact that the union territory was not what they thought it was. It was greater centralisation than decentralisation,” he said.

“Buddhists in Ladakh were made to feel as if they were exploited by the Kashmir Valley, which was a centrally engineered divide to segregate Ladakh from Kashmir,” Professor Sheikh Showkat, who teaches law at the Central University of Kashmir, told Al Jazeera.

“Ladakhis thought once they will get the union territory status, they will be the masters of their own land. But that has proved to be a nightmare for them because a union territory has very little power and most of the decision-making happens in New Delhi.”