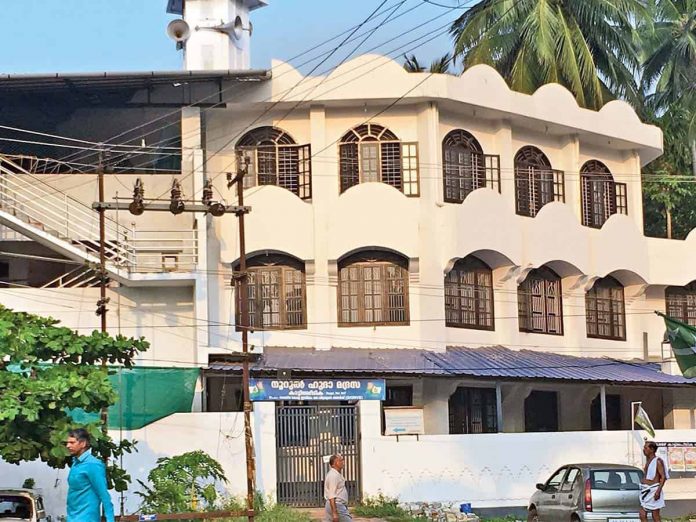 Kozhikode: Walls are made to separate, but this wall at Hamsakulangara Meledathu Siva Temple and Badr Juma Mosque on Kozhikode-Kannur highway is standing between the temple and mosque since five-decades is a unique symbol of unity, harmony and brotherhood. Temple bells or bhajans and mosque’s azan or prayers never acted as a nuisance in Hindu Muslim-worships. The temple stops playing bhajans during morning azan.

According to U. Shivanandan, president of the temple governing committee, clerics, priests and community members from both the sides attend each other’s religious events and enjoy whatever food is served in mosque or temple.

During an important annual temple ritual, the elephants are made to circumambulate the temple, but the extended temple structure obstructed the elephants from doing so. On temple authorities’ request, the mosque committee dismantled the wall and constructed a new one leaving sufficient space to pass the elephants by. This was the noble gesture from the mosque’s committee — they did not charge any money for the piece of land and handed over the document at a public event at the temple. Said Temple secretary Subhash Chandran.

According to Shivandan this century-old mosque was in ruins and renovated in 1962. On the other side of the wall was a prayer room for Muslim travellers to pray. The room took the shape of mosque in 1970s without any conflict.

The Muslim community always helps the temple with money and other gifts. Last Ramzan, a good Samaritan donated bags of rice, food grains and edible oil to the mosque which was meant for poor Muslims. But the amicable mosque committee shared it with the temple.

“The temple is under restoration and our Muslim brothers have come forward with generous donations,” said Chandran.

Both Hindu and Muslim communities at Kozhikode-Kannuris are under constant fear that something mischief may take place by media or some trouble maker may interfere to mar the brotherhood and religious harmony at Hamsakulangara Meledathu Siva Temple and Badr Juma Mosque.

The temple committee vice-president, Sujith Kumar and Haris, secretary of the mosque firmly believe that their brotherhood and religious harmony will continue undeterred.