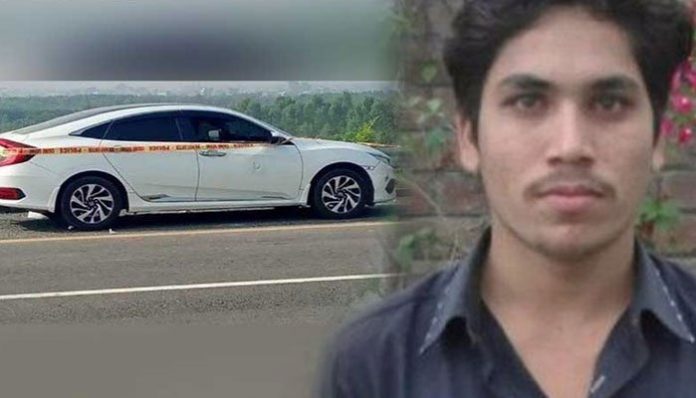 The Gujjarpura police produced the accused before ATC judge Arshad Hussain Bhutta amid tight security. The accused, with a muffled face, was brought to the court in an armoured vehicle.

The police informed the court that the accused was not nominated in the First Information Report (FIR) and was arrested on suspicion. The investigation officer stated that the mobile phone and the subscriber identity module (SIM) card, which was used by the accused at the time of occurrence, had been recovered. The call details record (CDR) has also been secured, he added.

It was informed that after the arrest of the accused, his swabs were collected for deoxyribonucleic acid (DNA) matching and were sent to the Punjab Forensic Science Agency (PFSA). The IO stated that the police received the report of PFSA which confirmed that the DNA of the accused had matched with the DNA which was collected from the crime scene and from the victim. The IO also claimed that the accused, during police custody, confessed to his crime.

The judge asked the accused if he wanted to say anything. To which the accused sought mercy. To which, the judge remarked that what mercy? And further said that his DNA had been matched. “If you have not done anything, you will be released,” the judge added.

The court, after hearing the police and the accused, sent the accused to jail on 14-day judicial remand. The court directed the jail authorities to make special arrangements so that the identity of the accused could not be disclosed to the inmates as well as to the private persons.

The court directed the investigation officer to conduct the identification parade of the accused as early as possible and produce him before the court on Sept 29. Earlier, the accused was produced before a sessions court as the ATC judge was not available. However, the sessions judge refused to hear the remand hearing, saying it did not fall under the powers of a sessions court and referred the matter again to the ATC.

A day earlier, the Counter Terrorism Department (CTD) had raided the house of Shafqat’s sister in Depalpur, district Okara, and arrested him. Shafqat was in contact with the prime suspect Abid Ali Malhi before and after committing the rape.

Shafqat, in the preliminary investigation, stated that Abid had first raped the woman and then forced him to commit the same. He said that when the Dolphin officials arrived at the crime scene, they were present there. But when Dolphin squad fired a warning shot, they left the crime scene and hid in Karol jungle. After two hours, they left the jungle and reached Sheikhupura at the home of Abid Malhi, Shafqat added.

After that, both switched off their cell-phones and parted ways. Shafqat went to the house of his sister from where he was arrested, while Abid avoided a police raid and went underground, and he was still at large.

Police investigation revealed that it was a gang of four criminals including Abid Malhi, Ali Sher, Iqbal alias Bala Mistri and Shafqat alias Bagga, who used to commit crimes in Sheikhupura and other cities.

Moreover, on Aug 8, Abid and Ali Sher were arrested by the Factory Area police of Sheikhupura when they robbed a citizen while their third accomplice, Shafqat, had fled the scene. However, Abid secured bail while Ali Sher is still in jail. After that, Iqbal, who is the fourth member of the gang, suggested changing the crime area as they were under radar of Sheikhupura police.

Iqbal is a resident of Karol Ghati and he asked the gang to robe people near the said area. The gang used to make plans of dacoities via phone and used code word “Gup-Shup” for calling a meeting of the gang. A couple of days before the incident, Abid called Shafqat for ‘Gup-Shup’. Both called Iqbal to join the party, but he could not turn up due to his domestic engagements.

The accused spotted the car of victim woman as the hazard lights of the vehicle were on. The duo approached the car and later looted the woman and gang-raped her. On Tuesday, police also arrested Iqbal alias Bala Mistri, but the prime suspect Abid Malhi is still at large.

Meanwhile, the Motorway gang-rape victim once again refused to record her statement to the investigation team. A police team left for her home for the purpose, mandatory for further legal proceedings, but returned unsuccessful.

Reportedly, the victim was not in sound mental health. Her statement and availability for the identification parade was necessary for the case to pursue further in legal arena. Otherwise, it may benefit the accused person as it will weaken the case.

However, the victim, since the time she met an unfortunate fate, had been reluctant to initiate legal action. Reportedly, she had even refused to register an FIR. She was convinced for registration of the case, medico-legal examination after hectic negotiations between her relatives, police and few notables of the area.

Over five days had passed since the crime took place, the victim had enclosed herself inside her house. Since day one, police had been facing difficulties in contacting with her.

On Tuesday, the manhunt for the prime accused in the case continued. Police had conducted raids at multiple places based on the information they extracted from various persons, his family members and accomplices, about his whereabouts. However, police remained unsuccessful so far. The police authorities, throughout the province, had approached their sources in the criminal networks to urge them help trace out Abid.

Meanwhile, police also prepared a report to be presented before prime minister in the case. The report entailed the prime accused managed to flee police arrest because the media telecast information about him. Police report stated that they had conducted at least 66 raids to arrest the accused Malhi and also conducted DNA of 55 suspects so far.