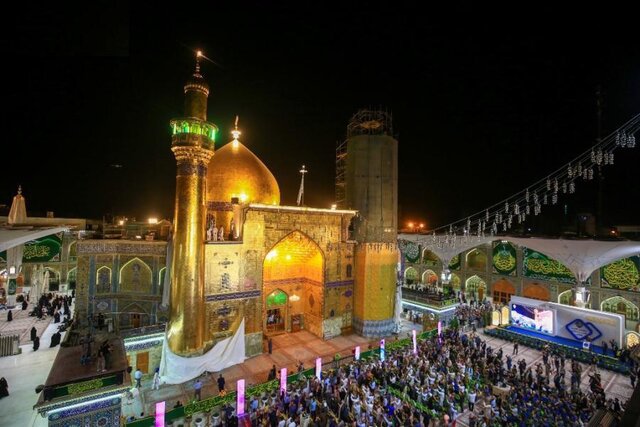 We hope that the restoration project on the north side of the porch of Imam Ali’s (A.S) shrine will be completed by Eid Al-Ghadir,” the Deputy Minister of Industry and Art of the Atabat Reconstruction Headquarters said.

The construction of this porch began during the Afshari period and by the order of Nader Shah and was completed in 1777 AH. After that, up to the current period, different parts and annexes of porches, domes and spiers have been reconstructed 4 times. In the current period, from the beginning of June 2017, the initial negotiations were carried out with the trusteeship of the shrine and the Endowment Office, and the initial project plans were done by Iranian engineers.

Mohammad Karimi, Deputy Minister of Industry and Arts of Atabat Reconstruction Headquarters, in an interview with Mehr News Agency, regarding the reconstruction, repair and development of projects on the north side of the Imam Ali (A.S) shrine, said: “Reconstruction and restoration of the gilded bricks of Najaf porch was divided into three phases. The southern part was opened and ready for operations during the Eid Ghadir last year.”

He continued: “All the tiles and other parts of the southern part of the porch of Najaf were dismantled, repaired and re-gilded. Afterwards, they were reassembled and replaced in the same old style and manner while preserving the past works. In the northern part of the Najaf porch, after retrofitting and strengthening the tiles, they were reinstalled again.”

Referring to the operations in the northern phase of the project, Karimi said: “The northern part of the Najaf porch, according to forecasts, was to be put into operation on Eid Ghadir this year. Unfortunately, due to the outbreak of the Coronavirus, the project was stopped and was delayed for nearly seven months. Given the newly opened ways for our presence and stay in Atabat holy sites, we hope that these executive operations will be completed soon.”

The Deputy Minister of Industry and Art of the Atabat Aaliyat Reconstruction Headquarters continued: “In the northern minaret of the dome of Amiral-Mu’minin (A.S), its brickwork parts have been repaired and its gilding has been done and installed. Currently, the chamber and Minaret of this dome are being strengthened and if there is no obstacle for our activities, we hope to complete the minarets in 2021 by continuing our activities.”

He added: “The parts and tiles of these minarets and chambers have already been gilded and only the execution part of the installation remains. Whenever the northern phase is completed, the third phase, which includes the restoration of the middle perimeters of the shrine, will be on the agenda.”

In response to the question when we can see the shrine and dome of the Amir al-Mu’minin (A.S) without scaffolding, Karimi said: “As planned, we have not yet reached the normal routine and a definite date cannot be predicted, but under normal circumstances it will take another year to complete the north side of the shrine. We hope that the project on the north side of the shrine will be completed by Eid Ghadir.” 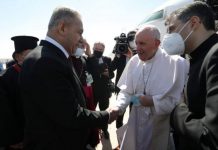 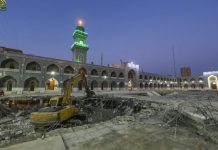 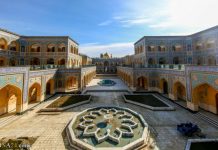