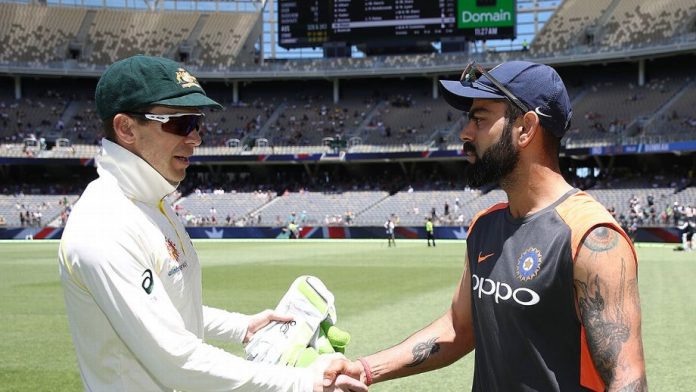 There has been a lot of love sloshing around the world of cricket in recent months. Boards flying touring teams over at their own cost. Players buddying their way through weeks in isolation. Goodwill and nasal swabs wherever you look. Everyone was so delighted that the IPL was able to be staged safely out in the deserts of the UAE that it was even more like a hippy commune than normal.

Even the upcoming clash-of-evil-empires between Australia and India threatens to be a let-down. Once upon a time, you could rely on Virat Kohli turning up at the Adelaide Oval next month and flipping the bird at the first idiot in the crowd to jerk his chain. Now he is such a paragon of modern masculinity, and a gentleman to boot, that he is taking paternity leave after the first Test – thus giving Australia a helping hand in their attempt to avenge a first-ever defeat at home to India in their previous encounter.

Tim Paine’s team, meanwhile, is so full of reformed characters they could pass for a group of Methodist preachers. Ever since Australia experienced their “Are we the baddies?” moment of realisation in Cape Town – the clues were all there: the swearing, the moustaches, the skulls on caps – Paine has borne the captaincy with statesmanlike responsibility, shelving the tantrums and histrionics, and attempting to return a sense of civility to the office. Seriously, who does he think he is, the next occupant of the White House?

India-Australia ought to be a rivalry so heated it contributes to global warming, but both sides are now too cool for the old school. So family-friendly was the sledging two years ago that the most memorable exchange involved Paine enquiring about Rishabh Pant’s availability as a babysitter.

In the words of Allan Border: “What do you think this is, a f**king tea party?” We’re all for barefoot circles before the series, so long as it’s bare-knuckle from there on. And don’t get too cosy up in your No. 1 ranking, India. Okay, you won last time around, but no Smith and Warner basically means it didn’t count (yeah, we said it).

Given the amount of time spent in bio-bubbles recently, it wouldn’t be surprising if everyone was getting a bit tetchy. But that’s okay, better to shake it all out on the field. C’mon, guys, it’s getting close to Christmas and there’s only one thing that we want. We want you bad.

Cricket is a simple game, if you leave aside all the complicated aspects like the lbw law, fielding restrictions, and when exactly to take tea. In that spirit, we’re delighted to see that the BBL has decided to look at the flagging T20 format and jazz it up with some exciting innovations such as, erm, the old ODI batting powerplay, and that Supersub idea the ICC tried and dropped 15 years ago. Although turning the much-mocked #atthisstage commentary crutch into a points-worthy metric just to nark Twitter could turn out to be an actual stroke of genius (that or it will go the way of the ECB’s Super Series brainwave from a few years back).

Anyway, after dipping into our extensive contacts book – which may or may not include the municipal waste disposal authority that services Melbourne’s Jolimont district – we can exclusively reveal some of the alternative ideas that sadly ended up in the Big Bash trash: