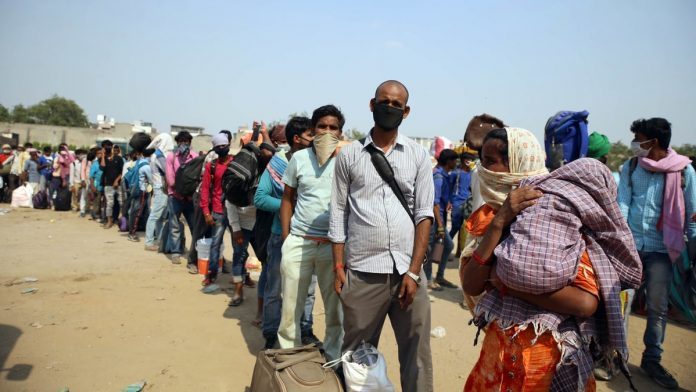 Lucknow: The political tussle between the Congress and the Yogi Adityanath government in Uttar Pradesh over transportation of migrant workers saw fresh twists early Tuesday as Priyanka Gandhi Vadra’s offer to run 1,000 buses to the state turned into in a game of shuttling letters between the two parties.

The UP government, which Monday accepted the Congress proposal to run the buses, wrote to the office of Priyanka Gandhi Vadra early Tuesday asking it to send 500 buses each to Noida and Ghaziabad borders by noon. It also asked for fitness certificates, insurance documents of buses, and drivers’ details to be submitted by the same time.

These demands were made after an elaborate drama played out overnight even as migrant workers remained stuck at the NCR borders amid the nationwide lockdown to curb the spread of Covid-19.

On Monday, hours after accepting the Congress proposal to run the buses, UP’s Additional Chief Secretary (Home) Awanish Awasthi wrote to Vadra’s personal secretary at 11.40 pm. In the letter, Awasthi asked for a handover of all the buses, along with fitness certificates and driving licenses of all the bus drivers, in Lucknow by 10 am Tuesday.

Vadra’s secretary Sandeep Singh shot back a reply at 2.30 am, calling the move inhuman and “totally influenced by politics”. He questioned what purpose would it serve in making the buses travel empty from the state’s borders, where they were, to Lucknow for a formal handover.

In the morning, UP Congress president Ajay Lallu targeted the Adityanath government, calling it “anti-migrants”. “You can also ask for details about the company of tires and from where drivers have taken training,” he posted on Twitter.

The latest sequence of events played out after the Yogi Adityanath government accepted the proposal of Congress general secretary and Uttar Pradesh in-charge Priyanka Gandhi Vadra for running 1,000 buses to transport the migrant workers stuck in Noida and Ghaziabad.

Earlier on Monday, Awanish Awasthi sent a letter to Vadra’s personal secretary on behalf of the UP government and asked for details related to the drivers of these buses.

In her letter, the Congress leader had said she wanted to operate 500 buses each from the Noida and Ghaziabad borders for all cities in UP. She said these buses will be especially helpful in ferrying these labourers trapped in the National Capital Region to their homes.

Why CM Yogi accepted the offer

While the political row is still developing, Chief Minister Yogi Adityanath’s decision to accept the Congress proposal created a lot of buzz Monday, with his supporters claiming on social media that he called the opposition’s bluff.

According to sources associated with the Adityanath government, the CM sought to highlight to the Congress how difficult it is to transport such a large number of workers from one city to another.

If these workers face any kind of problem along the way, Congress would be fully responsible for it, said the sources.

The sources said the move was prompted by Priyanka Gandhi Vadra’s constant targeting of the government on social media for its alleged negligence. On Sunday, several Congress leaders also hired buses from Rajasthan and parked them at the Mathura border, alleging that the UP government was denying them permission to move further.

“Now, when the Yogi government has asked for the list with vital details, the leaders of the UP Congress are saying that they are still preparing the list. This exposes their hand as they had done no such preparations. All along they were lying that 1,000 buses are standing on the UP border,” he said.

“Why can’t they provide these buses from the starting points in the Congress-ruled states? Why labourers were forced into trucks? All this is just a big publicity stunt,” he said.

On Tuesday, he tweeted that the Congress in its list also submitted details of autos, taxis and motorcycles, which means they don’t have 1,000 buses.

By accepting the proposal, Chief Minister Yogi Adityanath targeted many birds with one stone, according to sources in the BJP.

On one hand, they said, it’s a ploy to expose the Congress’ hollow claims of helping the migrant workers, which on the other, it has completely ousted Akhilesh Yadav from the political equation even though he is the leader of the main opposition party in UP and a former CM.

In the past few days, Yadav was taking pot-shots at the government on the issue, but it’s Priyanka Gandhi Vadra’s proposal that’s now making the headlines.

“What can be a bigger irony for Akhilesh than that the leader of the number four party (Congress) in the state is hogging more limelight than the leader of number two party,” said a party source, who didn’t wish to be named.

According to a source associated with the Congress, the latest events are not a “one-time bonhomie” between Priyanka Gandhi Vadra and Yogi Adityanath.

In contrast, Akhilesh Yadav is active only on social media. But no strict action was taken by the government on the issues raised by him, nor were any of his proposals accepted after writing a letter like this, said the leader.

“All this proves that right now that Congress is the most active and assertive opposition party in UP,” he added.