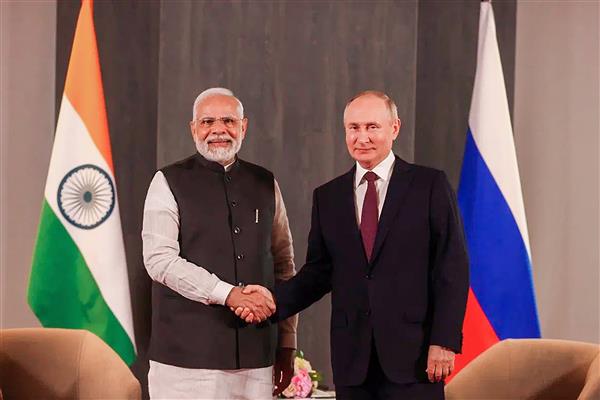 Now is not the time for war, let us strategise for peace, PM Modi tells Putin

Prime Minister Narendra Modi on Friday told Russian President Vladimir Putin that now is not a time for war, with food, fertiliser and fuel security among the major concerns of the world at present.

I know that today’s era is not an era of war, and I have spoken to you on the phone about this,” PM Modi told Putin on the sidelines of the Shanghai Cooperation Organisation (SCO) summit in Samarkand.

PM Modi also mentioned that India-Russia has stayed together with each other for several decades and hoped that he and Putin could strategise on progressing on the path of peace.

“I know about your position on the conflict in Ukraine, and I know about your concerns. We want all of this to end as soon as possible,” responded Putin in his opening remarks for the media before both leaders sat down for a bilateral meeting.

Putin’s observations were the same as he made for the media before a bilateral with Chinese President Xi Jinping a day earlier when he acknowledged Beijing’s concerns about the war.

The Russian President also thanked PM Modi for providing a vital outlet for Russian commodities including oil, coal and fertilisers after western markets were shut for Moscow after the sanctions. “Our trade is growing, thanks to your additional supplies of Russian fertilisers to the Indian markets, which have grown more than eight fold. I am hopeful that this is going to be of huge help to the agricultural sector of India,” said Putin.

In a personal touch, he said he was aware that PM Modi would celebrate his birthday on Saturday. In contrast PM Modi and Chinese President Xi Jinping neither acknowledged each other or shared a handshake in their public appearances.

India is importing about 7.5 lakh barrels of Russian crude daily as against 20,000 before the war broke out. Russia has also emerged as India’s fourth largest coal supplier while fertiliser imports have also multiplied.

Apart from his meetings with the Iranian and Uzbek Presidents, PM Modi also held a surprise meeting with Turkish President Tayyip Erdogan.

This was their first meeting in over two years since Erdogan on a visit to Pakistan had said the situation in Jammu and Kashmir was worsening. The remarks led to the summoning of the Turkish envoy and led to a chill in ties. Intelligence agencies have also repeatedly flagged the activity of Kashmiri expats in Turkey, especially the ones based in Ankara.

“The two leaders discussed ways to deepen bilateral cooperation in diverse sectors, appreciated the recent gains in bilateral trade. Also exchanged views on regional and global developments,” tweeted the MEA. Facing a food crisis, Erdogan sought more wheat from India in addition to the rice it had bought.

Video: The Caravan of Zainab (SA); At Your Service

Long-lost moon said to be origin of Saturn’s rings