New Delhi: The Union Cabinet approved a proposal for updation of the National Population Register (NPR) on Tuesday. Union minister Prakash Javadekar said, “Rs 1,300 crore has been allocated to NPR and Census”.

It will be conducted by the Office of the Registrar General of India (RGI) under Union Home Ministry and the exercise to update NPR would be held between April and September 2020 in all states and Union Territories.

It may be mentioned that it is being prepared at the local (village/sub-town), sub district, district, state and national level under provisions of the Citizenship Act, 1955 and the Citizenship (Registration of Citizens and Issue of National Identity Cards) Rules, 2003.

Is NPR first step towards NRC?

Union Home Minister Amit Shah on Tuesday said that there was no link between the National Population Register exercise and the National Register of Citizens and that the process of NPR cannot be used for NRC. However, Hyderabad MP Asaduddin Owaisi said that the NPR is the first step towards the NRC.

He also shared PIB Press Release of 2014 and wrote, ” Wazir e Dakhla, it was your statement(s) in Parliament, it was YOUR fascinating explanation of “chronology”, & your very “erudite” legal expositions that we were believing

You’re confused, so here’s a 2014 press release from your own ministry”.

As per the Sub-rule (4) of Rule 4 of the 2003 Rules, during the verification process, particulars of such individual, whose citizenship is doubtful, shall be entered by the Local Registrar with appropriate remark in the Population Register for further enquiry.

According to Sub-rule (5a) of Rule 4 of the 2003 Rules, such persons shall be given an opportunity of being heard by the Sub-district or Taluk Registrar of Citizen Registration, before a final decision is taken to include or to exclude their particulars in the National Register of Indian Citizens (NRIC).

People who failed to their name in NRIC have to explore other legal options to prove their citizenship. If they fail to prove citizenship, they will be termed as foreigners.

After this stage, the Citizenship Amendment Act of 2019 comes into the picture. People who can prove that they belong to any of the five religions viz., Hindu, Sikh, Parsi, Buddhist and Christian from Pakistan, Afghanistan and Bangladesh and they have entered India on or before 31st December 2014 may get Indian Citizenship.

Is it Modi vs Shah?

For the past so many months, on many occasions, Amit Shah has said that NRC will be conducted to identify infiltrators and the process will be completed by 2024.

However, at Ramlila Ground in New Delhi, Prime Minister Narendra Modi said that since 2014, no discussion on nationwide NRC took place. He further said that NRC was conducted in Assam based on the SC order. 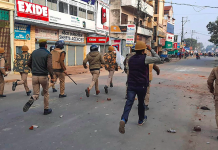 How can country grow without employment? P Chidambaram on revised GDP data