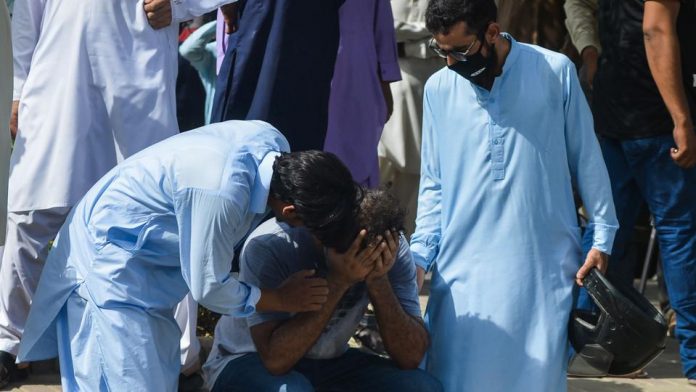 A Pakistan International Airlines (PIA) plane which took off from Lahore on Friday with 91 passengers and seven crew members crashed in a residential area of Karachi, with many feared dead, officials said.

“The last we heard from the pilot was that he has some technical problem,” PIA spokesman Abdullah Hafeez said.

The PIA plane was a 15-year-old Airbus A320. It was close to landing when it came down among houses in Karachi, sending plumes of smoke into the air that could be seen from some distance away.

By evening, it was unclear how many passengers or crew had survived. The city’s Mayor Wasim Akhtar claimed there were no survivors but provincial Information Minister Nasir Hussain Shah and civil aviation authorities said at least two people had come out of the crash alive.

At least one person posted on Twitter about a relative who survived the crash but it is unclear how many passengers or crew managed to escape death.

Fatalities are also expected from the neighbourhood the plane crashed into, Model Town.

The pilot sent a Mayday and told controllers the aircraft had lost power from both its engines on its second attempt to land, according to a recording posted on monitoring website liveatc.net.

After the aircraft reportedly called off an earlier attempt to land and went around for a second attempt, a controller radioed the pilot of flight 8303 that he appeared to be turning left, suggesting he was off-course.

The pilot replied, “We are returning back, sir, we have lost engines,” and the controller cleared the plane to land on either of Karachi airport’s two West-Southwest-facing runways.

There was no further communication from the aircraft, reported to be an Airbus A320, according to the audio from liveatc.net, a respected source for in-flight recordings.

Family friend on PIA flight called his wife ten minutes before it went down, saying the plane was on fire and he didn’t know if he would make it. Fault in landing gear? PIA, buss.— madeeha ansari (@madeeha_ansari) May 22, 2020

Scenes at the site of plane crash, a congested residential areas. Several homes damaged.8011:54 AM – May 22, 2020Twitter Ads info and privacy24 people are talking about this

The airport in the northeastern city of Lahore, where the flight originated, initially said there were 107 people on board. The civil aviation authority later said the plane carried 91 passengers and seven crew members.

Spokesman Abdul Sattar Kokhar said the discrepancy was due to confusion in the chaotic aftermath of the crash.

The disaster comes as Pakistanis across the country are preparing to celebrate the end of Ramadan and the beginning of Eid al Fitr, with many travelling back to their homes in cities and villages.

Commercial flights resumed only days ago, after planes were grounded during a lockdown over the coronavirus pandemic.

Geo TV broadcaster showed crowds near the scene, which appeared to be a densely populated area, and ambulances trying to make their way through.

Black smoke billowed and several cars were on fire.

The Pakistani army said its quick reaction force and paramilitary troops had reached the site for relief and rescue efforts alongside civil administration bodies.

In Pakistan’s most recent deadly crash, 47 people died when a PIA jet smashed into a mountainside in Khyber-Pakhtunkhwa province in 2016.

The country’s worst plane disaster came in 2010 when an AirBlue flight crashed killing 152 people near Islamabad.

This is a developing story and will be updated…Source: TRTWorld and agencies